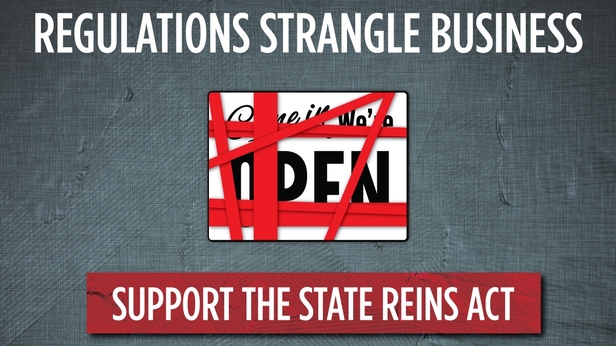 The regulatory reform bill passed the Assembly 60-33, but fate remains uncertain in Senate

Four Republican senators refuse to discuss their opposition or support for the REINS Act, raising concerns that the bill will fail

[Madison, Wis…] After passing the Assembly on a party line vote with every Republican voting in favor, Assembly Bill 251 (AB 251) may not have the support it needs to reach the Senate floor for debate. For supporters, time is running out quickly – the Senate is expected to hold their last session day of the year on Tuesday, March 15.

Also known as the REINS Act – Regulations from the Executive in Need of Scrutiny Act – AB 251 would slow down the process of regulation, allowing for more input from the public. If an economic impact analysis finds that a proposed regulation would cost $10 million to small businesses, units of government, and individuals across two years, the agency proposing the rule must:

If passed, the REINS Act would also add new public hearing and fiscal estimate requirements for administrative regulations as well as create new roles for the Office of Business Development and the Department of Revenue.

Supporters of the bill argue that the regulatory state – at both the state and federal levels – has grown too large and distant from public input.

“This bill is both common sense and substantial,” Rep. Adam Neylon (R-Pewaukee), the lead Assembly author, said. “It restores power to the legislature by disallowing state agencies to promulgate rules that have a cost of compliance for businesses that exceeds $10 million to be enacted without legislative support, and provides additional opportunities for public feedback on new proposed agency rules.”

Sen. Devin LeMahieu (R-Oostburg), the legislation’s lead Senate author, also expressed hope that the bill will receive a vote before the Senate next week. LeMahieu said that if passed, AB 251 “will help ensure that the public can hold legislators accountable for expensive bureaucratic mandates.”

“Bureaucratic rules have the force of law, but often do not require a vote by lawmakers. This needs to change,” LeMahieu said. “Wisconsin needs the REINS Act to protect Wisconsin taxpayers and job creators from excessive bureaucratic red tape from Madison.”

One group, Americans for Prosperity – Wisconsin (AFP), has undertaken a petition drive to try to convince senators to bring the bill to a vote. On AFP’s website is a link to a petition which individuals can sign and send to their legislators. The petition reads:

“I count on you to be my voice in Madison; however, state agencies are increasingly passing costly regulations with little or no oversight.

I know that the senate only has one week left to finish this critical reform.

Costly regulations impact businesses and families across the state. Regulatory overreach threatens our economy and has gone on for too long. I want my voice heard when regulations are going to impact my life.

Assembly Bill 251 will turn the tide and provide citizens with a greater voice on major regulations.”

When arguing in support of the bill on the Assembly floor, Neylon said that his bill had overwhelming support among members, with only a single group registered in opposition. The National Federation of Independent Business (NFIB) and several environmental groups such as Clean Wisconsin registered in opposition, according to the Governmental Accountability Bureau.

Multiple capitol sources believe that seven of the 19 total Republican senators are on the fence or leaning no. MNS reached out to seven Republican senators in an attempt to determine where each of them stands on this issue. At the time of this report, staffers of three senators indicated that they were leaning in favor of the bill. One staff person that MNS talked to refused to answer the question. Three senators did not respond to MNS’ multiple attempts to contact them.

The NFIB’s opposition to the bill has puzzled many supporters as the group typically supports efforts at regulatory reform. In a memo dated March 7, Bill Smith, NFIB State Director, writes:

“In addition to the constitutional concerns of the Legislative Council, NFIB believes AB 251 seriously dilutes the rule-making authority of the Legislature by sharing key rule-making decisions with unelected bureaucrats with state agencies.”

Individuals familiar with the bill say that the NFIB simply doesn’t understand it.

“This bill enjoys support from a wide array of business groups, including the Wisconsin Manufacturers & Commerce and Wisconsin Independent Business,” LeMahieu said. “The one business that does not support the bill is the state branch of the National Federation of Independent Business. This is despite past support of the federal REINS Act by the federal NFIB. As a small business owner and NFIB member, I am disappointed that their state-based organization refuses to support the REINS Act. This bill is clearly a win for small business.”

When Regulatory Reform first unveiled a reporter asked if bill "too favorable" for small biz. Yet @NFIB Wisconsin working to kill the bill!

In the March 7 memo, the NFIB argues that other groups are in favor of the bill solely because of amendments carving them out of the rule-making process established in the bill’s text. Supporters have argued that’s not true, saying that a lot of confusion and misinformation exists among supporters and opponents of the legislation.

.@AdamNeylon: Talk of small biz being opposed to REINS Act "couldn't be further from truth." One lobbyist opposed it.

The Assembly amended AB 251 in several different ways, such as exempting certain proposed DNR rules relating to air quality and rules promulgated by the state’s Commissioner of Insurance.

With the end of session just around the corner, stay tuned for further MNS coverage on legislative happenings, including the REINS Act and our biennial End of Session Awards.