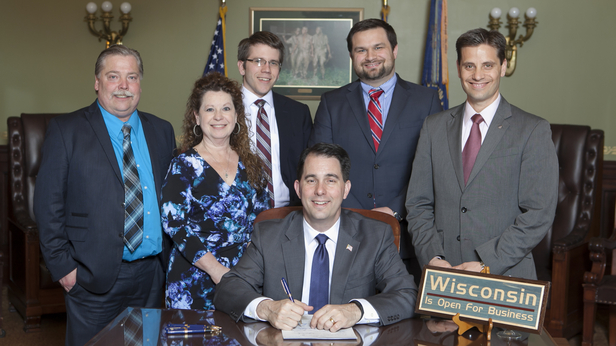 [Madison, Wisc…] Gov. Scott Walker has signed Senate Bill 407 into law, making it 2015 Wisconsin Act 201. Starting with next year’s budget, each agency will have to submit one budget request which assumes a 5 percent reduction in their budget, and one request which assumes the budget stays at its current level.

Rep. Rob Hutton (R-Brookfield) and Sen. Chris Kapenga (R-Delafield), co-authors of the bill, thanked the governor and reiterated their argument that the legislation will improve the process of budget-making by allowing agencies to address their own spending.

“In order to properly right size government we need to continually look at ways to evaluate the effectiveness of every dollar spent and find efficiencies within our budgets,” Kapenga said. “The BASE Act takes a significant step towards improving transparency in our budget process by giving legislators the tools needed to examine how agencies prioritize spending.”

“I applaud the governor for signing this piece of legislation into law, as it is a critical tool to address spending within our agencies,” Hutton said.

To catch up on the debate over zero-based budgeting, check out MNS’ past coverage here.