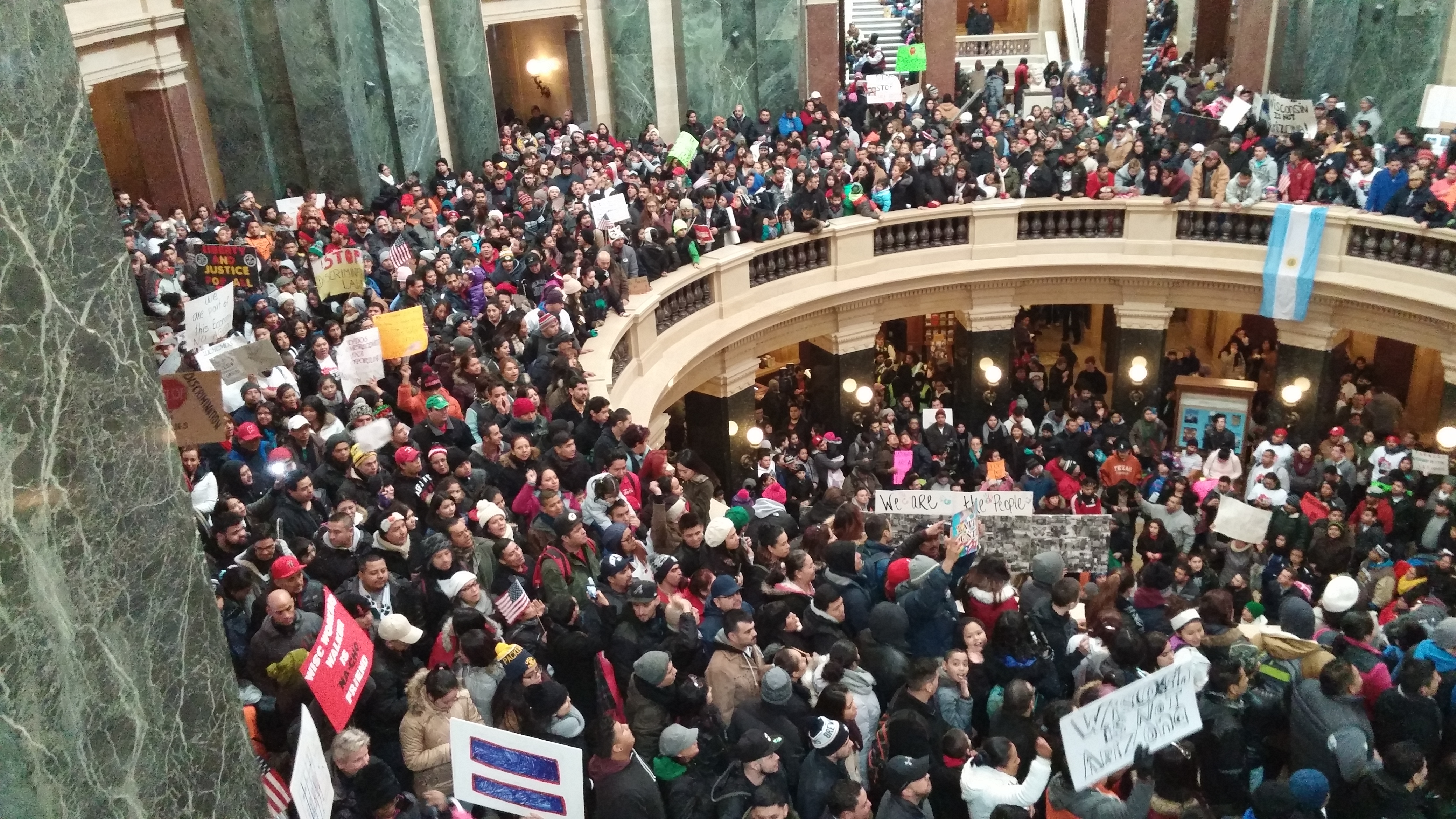 Described as a “Day Without Latinos and Immigrants En Wisconsin,” the protests focused on two bills, Senate Bill 533 (SB 533) and Assembly Bill 450 (AB 450). SB 533 would restrict the uses of identification cards issued by local governments.

AB 450 passed the Assembly on Tuesday and has yet to be scheduled in the Senate.

While the protest carried on for hours outside the Capitol, some inside wondered aloud about the motive of the organizers and some lawmakers asked the question – did organizers of the protest deliberately mislead their supporters about the effect these bills will have on their lives to increase the turnout at the rally in the hopes of using the fear and anger of the protesters for political purposes?

“It’s unfortunate that once again, primarily liberal Democratic activists are using this as a way to drive a wedge with fear and misinformation, and that’s unfortunate,” said Assembly Speaker Robin Vos (R-Rochester) in a news conference during the protests.

Madison’s chief of police, Mike Koval, warned he expected up to 5,000 protesters during the rally, which started at 10 a.m. By 8:30, crowds had already gathered outside Madison East High School, Madison Memorial High School, and in the Capitol rotunda.

Opponents of the bills say they reduce local control and infringe on the rights of immigrants.

“We have seen cases, even before these bills have passed, where people with no criminal record have ended up in detention and deportation,” Christine Neumann-Ortiz, executive director of Voces de la Frontera, said in a statement. Voces de la Frontera is a Milwaukee immigrants rights and labor group that organized the protests. Neumann-Ortiz did not back up her deportation assertion with any proof.

According to Voces de la Frontera, parents took their kids out of school and workers from around the state skipped work to march in Madison. Numerous businesses were planning to close in support of the demonstrations, according to the statement.

Sam Singleton-Freeman, the organization’s communications coordinator, couldn’t precisely estimate the size of the crowd, but said the number is far higher than the 5,000 chief Koval predicted on Wednesday in an email to area employers.

Vos said both bills are being misrepresented. Since the DMV provides free identification cards there is no need for cities to create their own IDs, Vos said. But SB 533 doesn’t prevent cities from issuing their own IDs, it only says what they can and cannot be used for, clarifying that only state-issued IDs can be used to vote and access state-funded benefits.

Rep. Joe Sanfelippo (R-New Berlin), co-author of the local ID bill, listed five false claims http://legis.wisconsin.gov/assembly/15/sanfelippo/media/1223/2-18-sanfelippo-municipal-id-facts-news-release.pdf made by those opposing the legislation. In particular, he emphasized that the bill doesn’t bar local governments from issuing IDs. “All the bill does is lay out the ground rules for issuance and use,” Sanfelippo said.

According to media reports, many of the protesters work in agriculture.

While the protests were predominantly civil, some of the signage reflected the hyperbolic rhetoric the legislation’s supporters say is being used by its opponents.

While the number of demonstrators is unknown, the “Dia Sin Latinos” protest on Thursday was likely the largest protest since Act 10 five years ago to the day.

Organizers of the protest did not address why they were protesting for the first time SB 533, a bill that had already made its way through the legislative process.