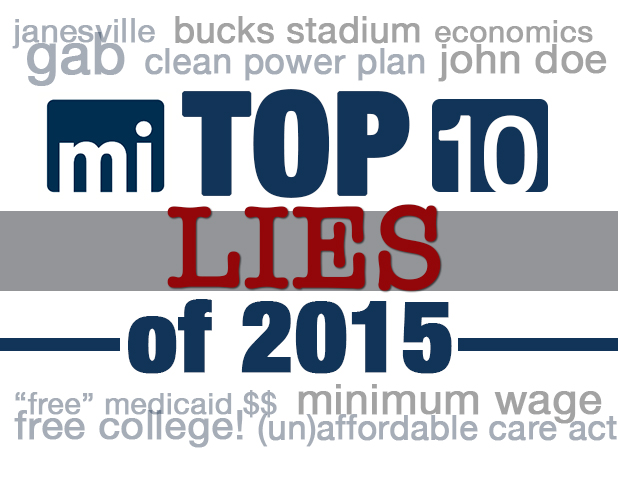 [Madison, Wisc…] In today’s world, too often a politician or a special interest group will stretch the truth for political gain or to take control of the public debate. It is a sad commentary on the state of political discourse. If you lie often enough, the lie will be accepted as fact by the mainstream media and even the public.

This willingness by politicians to play loose and fast with the facts is especially dangerous if there is no one to fact check their bluster and, when necessary, alert the public to their underhanded deception. That is where your good friends at the MacIver Institute come in. With the hope that these lies might finally be put to rest in 2016, here are the MacIver Institute’s Top Ten Lies of 2015. We’ll start with number ten and finish with the biggest political lie of the year.

You can’t make this stuff up. Starting off our list is a federal government so eager to convince the American public that the world is set to spontaneously combust that it is willing to lie about the supposed groundswell of support to stop climate change. Amid all the hype and hyperbole surrounding this year’s Paris Climate Conference, we found a United Nations list that purports to track the commitments of governments and other entities to curb their carbon emissions.

On that list is, however, the city of Janesville. According to the global alarmists, Janesville has promised a 75% CO2 reduction by 2050. It sounds like an impressive commitment by a local government to do their part to help solve global warming. The only problem? No one in Janesville knows who made that promise. City Hall responded with a collective ¯_(ツ)_/¯ when we asked them for details on the commitment or who in city government made the carbon reduction commitment. Imagine that – President Obama stretching the truth for political gain?

9. The Taxpayer-Financed Bucks Arena Will Be a Great Investment for the City of Milwaukee

Despite the insistence by sports fans and fairweather economists that it’s “cheaper to keep them,” we know this is simply untrue. The bipartisan coalition that pushed for the public funding said the public would pay about $250,000,000 upfront to build the stadium. That number later increased to $400,000,000 when interest was included, given that the $250 million will be paid out over 20 years. However, a Legislative Fiscal Bureau (LFB) estimate revealed that the real cost would be even higher than politicians wanted to admit. The nonpartisan organization included interest costs, contractual liabilities, and maintenance projects for the current Bradley Center – costs that the coalition to fund the new stadium had previously ignored.

As fiscal conservatives and supporters of the free market, we have to ask: is this truly the proper role of government? Do we not have more important priorities for our scarce tax dollars? Is it a critical role of state government that taxpayers build an arena for billionaire owners who employ multi-millionaire ball players?

The deal was so bad, comedian John Oliver – who is not exactly known for his free market views – slammed it on his national show. Even if you are a Bucks fan, you must watch this video (9:25). As you are laughing uncontrollably, it will dawn on you – you got robbed on this deal.

2015 had no shortage of crazy ideas. In August, we reported on a Madison College professor named Jim Carpenter who advocates for a flat GDP, 30-hour work week, and a zero-growth population. If we all just tried a little less to get ahead, everyone would be better off and all the world’s problems would be solved.

As the director for the Milwaukee chapter for the Center of the Advancement of the Steady State Economy (CASSE), Carpenter integrates CASSE’s principles into his economics courses.

The cornerstone of this philosophy is a “stabilized population,” which means no population growth. CASSE states if population were flat, there would be no need for the economy to grow because you wouldn’t need more jobs, food, energy, etc. Everything could remain static.

Additionally, in this utopia, there would be a minimum and maximum income, a 30-hour workweek, cities would be smaller and more compact, and cycling would be the main form of transportation. Technological progress would be limited by what’s best for society. The free market would determine how goods and services are allocated, but government would determine how big companies could get and what resources they could use.

Did we mention that this professor has an annual salary of $95,000? Your tax dollars at work, ladies and gentlemen. Your tax dollars working to undermine life, liberty, and the pursuit of happiness – one of the founding principles of our country.

7. The Clean Power Plan will be Good for America

During much of 2015, climate change and energy policy were at the center of the public policy debate. With the President’s new Clean Power Plan (CPP) driving American energy policy, we wanted to see what the economics effects would be here in Wisconsin. That’s why we released a joint report with The Beacon Hill Institute at Suffolk University.

These types of increased costs would reverberate all across Wisconsin’s economy – costing an estimated 21,000 jobs and a loss in disposable income of $1.82 billion by 2030.

Of course, along with the economic lies comes the Obama administration’s insistence that the rule changes are permanent. At a forum discussing the plan, EPA Region 5 administrator Dr. Susan Hedman said that the CPP “was established through the standard federal rulemaking process. Any change would have to go through that process to promulgate a new rule.”

In other words, a new president or Congress won’t be able to repeal the CPP. We suggest she start by rereading Article One, Section Eight of our Constitution.

6. The Government Accountability Board Was Nonpartisan and Fair in its Work

We’ve been reporting on the Government Accountability Board (GAB)’s questionable methods for years. This year, however, the “watchdog” was finally reformed, much to the chagrin of those who agreed with its slant.

There were the Lois Lerner emails. The partisan employees. The clear cases of simple incompetence, such as failing to check the voter rolls for felons and taking five years to audit electronic voting machines.

Amid all this scandal was the insistence on the part of the left that the GAB was nonpartisan and an effective watchdog.

We will refer you to the facts. The Legislative Audit Bureau (LAB)’s 2014 audit revealed many troubling things about the culture of the GAB. We learned that the GAB failed to promulgate required rules for more than eight years, didn’t have consistent rules about when to apply penalties, and that staff withheld information they were legally required to disclose to the board.

The GAB acted as if it were above the law, performing only the tasks it wanted to. #GABproblems #ReformGAB #wiright pic.twitter.com/S7dQRPX58o

We’ll say it once, we’ll say it a million times: if the accountability board is itself unaccountable, how can we have any confidence in the integrity of our elections?

5. Ending the John Doe Process Will Set Wisconsin Back Decades

Wisconsin’s John Doe process was one of the biggest stories of the year. This summer, the
Wisconsin Supreme Court finally struck down the investigations as unconstitutional. In the fall, legislators spent months debating the process and finally passed a reform bill, which Gov. Walker then signed and passed into law.

And yet, many individuals continue to defend the John Doe process. Every Democrat in the Legislature voted against the reform bill, arguing that a grand jury process would be too expensive and that the new system would somehow be unfair.

Debate recap so far: #johndoe is unconstitutional but grand juries are hard. #wiright

.@TimCarpenterMKE compares Wisconsin GOP's obsession with power to Gollum and his precious ring from Lord of the Rings #WIpolitics

Republicans reminded them that no other state in the country uses John Doe proceedings, and that Wisconsinites’ first and fourth amendment rights shouldn’t be violated to save an “effective” process.

.@Vanwanggaard citing his experience handling hundreds of #JohnDoe investigations as reason for knowing how broken the system is #reforms

.@Vanwanggaard says it 's "absolutely a joke, absolutely untrue" that #JohnDoe is only tool for investigators to prosecute criminals

Despite all this, Democrats insisted that reforming the proceedings would end accountability and spur political corruption across the state. Given their past predictions, something tells us 2016 should turn out just fine.

.@SpeakerVos says has dozens of examples when Dems said the world was going to end and they were completely wrong. #wipolitics #wiright

4. Wisconsin Should Have Accepted the “Free” Medicaid Expansion Money

Many on the left continue to insist that turning down the federal government’s Medicaid expansion money was a bad idea. “Free money!” they cry – “how could Wisconsin turn down free money?”

Free? There’s no such thing as free money, especially when the government is offering it. After all, most Wisconsinites are federal taxpayers and with a federal government over $18 trillion in debt, any new federal government spending is not free at all. It is, in fact, being paid for by future generations – your children and your grandchildren.

Regardless, Sen. Jon Erpenbach’s office asked the Legislative Fiscal Bureau (LFB) for an estimate of accepting Obamacare’s “full expansion” in Wisconsin. To their great surprise – the nonpartisan LFB said what we knew all along – Wisconsin made the right choice in rejecting the funding.

If the expansion of Medicaid actually went through, the federal government would have to spend $228.4 million next year and $580.5 million for 2016-17. That’s $808.9 million in additional federal spending to finish the biennium against the $323.5 million Wisconsin taxpayers would supposedly save, for a net increase in government spending of $484.4 million.

Did we mention that the federal government is running a $18.8 trillion debt? Shameful. Just shameful.

3. The Minimum Wage is an Automatic Life Sentence of Poverty

After more than a year of protests calling for the minimum wage to jump from $7.25 an hour to $15 an hour, the mainstream media has yet to tell another side of the story – the side that shows it is possible to start at minimum wage and become a success.

They don’t want people to know that through hard work and perseverance, anyone can move up from an entry-level, minimum wage job to management and even ownership of a company.

Of course, that’s not what you’ll hear from Maggie, Darin, or Marshall:

As former employees who made far below today’s minimum wage, they know that anyone can find success in America.

2. America Should Cancel Student Debt, Make College Free, and Raise the Minimum Wage to $15 per Hour

Fox Business’ Neil Cavuto took on the national leader of the Million Student March for this year’s second biggest lie. The demands? A cancellation of all student debt, free public college, and a $15 per hour minimum wage.

In other words, a trifecta of bad economics.

We really can’t say it better than Neil himself. He simply asks the activist how she would pay for these reforms.

Finally, 2015’s biggest lie. This one really takes the cake.

You’ll be able to keep your doctor, they said.

The same plans and hospitals, they said.

Of course, even before the full implementation of Obamacare, we know that none of this will be true. Wisconsinites’ premiums are increasing faster than the national average.

In August, we reported on the financial troubles of Wisconsin’s Obamacare co-op. That co-op received $104 million in federal loans and finished fiscal year 2014 with a $38.5 million deficit.

We also know that in 2016, Wisconsinites will see higher premiums and fewer choices in their healthcare plans. All thanks to the “Affordable” Care Act. The president should be ashamed of himself.

If 2016 continues on the same track, we’re sure to have our work cut out for us.

Stay tuned for our next and final Top Ten list!