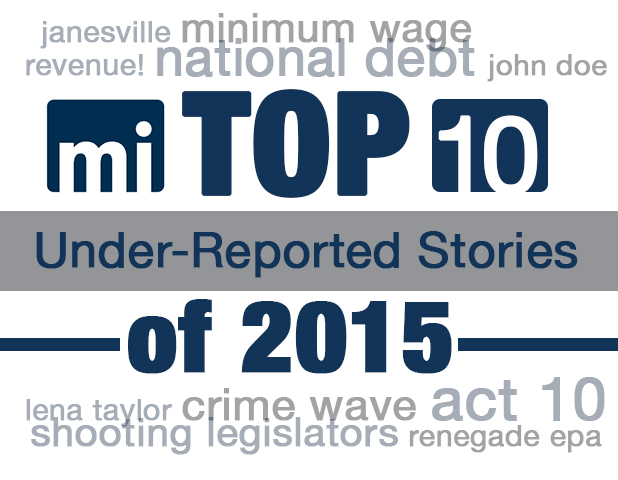 [Madison, Wisc…] In today’s never-ending, 24-hour news cycle, there are always crucial and important stories that somehow do not receive the attention they so richly deserve. Whether the mainstream media willfully ignores these stories or just misses them, there are essential stories the public deserves to know about.

That’s where your good friends at the MacIver Institute come in.

With 2015 coming to a close, it’s time for our annual roundup. This year, we start our series of Top Ten lists by presenting you with the Top Ten Underreported Stories of 2015. We start at number ten and conclude with the most underreported story of the year.

During the budget cycle, tensions and emotions ran high on the powerful Joint Finance Committee while they debated late into the night. At one point, Sen. Lena Taylor (D-Milwaukee) said that “for years, individuals who sit on this committee and in this building have known that they have been raping the children of MPS.” Rep. Dale Kooyenga (R-Brookfield) called her use of the word ‘rape’ “absolutely sick” and called on her to apologize, but Sen. Taylor refused to back down. She later revealed that she is a survivor of sexual assault and argued that makes her qualified to use that word when talking about policy.

Sen Taylor doubles down on rape comparison. Being victimized yourself should make you more sensitive, not less #wiright #WomenDeserveBetter

The Unfair Sales Act, otherwise known as the minimum markup law, requires a markup of approximately 9% on alcohol, tobacco and gasoline sold in Wisconsin. It also bans stores from selling almost all other merchandise below cost, which leads to higher prices for Wisconsin consumers. This law is a relic from the 1930s, a time when Hitler was taking over Europe and the prohibition of alcohol was thankfully ended.

Even though legislators have introduced and reintroduced a bill to repeal the decades-old law, the bill has yet to see a hearing in either chamber. As the MacIver News Service reported, Wisconsin consumers pay more for a range of products, including school supplies and electronics, thanks to the minimum markup law.

Grocery store chain Meijer entered the Milwaukee market this year and offered prices so good they were illegal. During Thanksgiving and Black Friday, the MacIver Institute warned Wisconsinites of the impending crime wave and asked them to speak up if they see prices that are too low. Remember, the Wisconsin Price Police exists to protect you from illegally low prices.

As we head into a new year with the minimum markup law still in place, the question remains – will Wisconsinites finally demand an end to this archaic law that prevents them from receiving the best possible price when they shop?

In August, the MacIver News Service attended a free summit titled the “Wisconsin Public Education Summit.” The event featured an opening speech by Department of Public Instruction Superintendent Dr. Tony Evers, followed by three breakout sessions during which participants could choose from five concurrent panels. The MacIver Institute attended six of these panels as well as the opening plenary session. During a panel one of the speakers, Dennis McBride of Support our Schools-Wauwatosa, joked about shooting down legislators. Audience members chuckled. One woman interrupted McBride, remarking “nobody in here is like recording that where that’s going to end up on somebody’s campaign trail.” Unfortunately for them, the MacIver News Service was in attendance.

According to the United Nations, Janesville has promised to reduce its CO2 emissions 75% by 2050. Problem is, nobody told Janesville. When MacIver News contacted city leaders to inquire how Janesville would meet such an ambitious goal, they said they have no idea who supposedly made that commitment and that Janesville has no plans to comply with the UN’s wishes.

6. You Can Be Successful Even if You Start at Minimum Wage

This year, the MacIver Institute released a video series featuring individuals across Wisconsin who started in minimum wage jobs and who now manage, own, and operate their own restaurants. These are true success stories overlooked by the mainstream media, who only seem to broadcast the nonsense from the professional protestors that an entry level job is an automatic sentence of life in poverty. Children today need to know that hard work is not a disease to be avoided but the key to success and financial security.

The repeal of the John Doe law was certainly well-reported in this state, but the vast majority of coverage characterized the move as protecting special interests and politicians. Nonsense. Milwaukee District Attorney John Chisholm continued to violate the first and fourth amendment in his overzealous pursuit of, in his mind, a campaign finance quibble. Conservative individuals, whose only crime was participating in democracy, had their private property seized, their homes invaded, and their children intimidated. And yet, when Gov. Scott Walker signed the bill repealing the secret and undemocratic police state procedure, the media repeatedly ignored and downplayed the heavy-handed and unconstitutional actions of the rogue prosecutor. Truly shameful.

With the release of the President’s Clean Power Plan (CPP) and the Paris Climate Conference just last month, climate change and energy were both huge topics of debate this year. The MacIver Institute released a study on the economic effects of the CPP – nearly 21,000 jobs would be lost in the state and disposable income would drop $1.82 billion by 2030. Of course, the mainstream media did not consider this in all the fanfare surrounding global warming and the Paris conference. These proposed changes will have a devastating impact on the nation’s economy, and yet, the media coverage seems more obsessed with the possible 0.018 degree reduction in global temperature over the next 85 years. Global warming alarmists need to get a grip and come back to the real world.

At one event, an EPA administrator insisted that no future president or congress could repeal the CPP, and would have to instead go through the same rules process used by President Obama to sidestep democracy. When the MacIver News Service asked for an interview to clarify those comments, she tentatively agreed and then snuck out of the event. Ironically, the forum was titled “Knowledge is Power.” Yeah right.

Luckily, new Attorney General Brad Schimel stood up for Wisconsinites when he announced his decision to sue the EPA, not once, but twice, over the CPP. He explained his decision in an op-ed that we published, arguing that the EPA went far beyond its legal authority in manipulating the energy market. Good on him.

Unwilling to take questions from the media, EPA Region 5 administrator sneaks out of forum early. #wiright

We are at the Live from Paris event hosted by WI Academy of Sciences, Arts and Letters & WI Institute for Discovery pic.twitter.com/4sKWVDvGYO

3. $3 Billion in Taxpayer Savings and Climbing

Act 10 truly is the taxpayer gift that keeps on giving. Although it dominated headlines at the time of its passage, not much has been made out of the continued success of Act 10. Wisconsinites continue to see impressive savings from Act 10. $3 BILLION DOLLARS in savings statewide. $3 BILLION DOLLARS saved and taxpayers are still receiving the same level of service we expect from our government. Earlier this year, the Appleton Area School District (AASD) switched healthcare plans, allowing employees greater options for the first time – a switch that was only possible thanks to Gov. Scott Walker’s signature Act 10. The switch will save AASD between $1.1 million and $3.3 million. And the taxpayers rejoice once again!

2. Taxes Down, Revenue Up – The Government Allows Wisconsinites to Keep More of Their Money and the Sky Doesn’t Fall

Despite the fact that Walker critics love to talk about the “horrible financial state” that Wisconsin is in, the numbers don’t lie. Even as taxes continue to go down in the state, revenues are actually up.

From fiscal year 2014 (FY14) to FY15, state revenues are up 4.3 percent – a jump from $13.9 billion to $14.5 billion. This is a sign that the Wisconsin economy continues to grow and the state is taking in more revenue despite cutting taxes in recent years.

Actual tax revenues are also higher than projections from the non-partisan Legislative Fiscal Bureau that were released in January. While individual income taxes came in slightly below those projections, overall collections were $71 million higher than expected earlier this year.

Another good sign for the economy is that sales tax collections beat January estimates and FY14 levels, meaning people are spending more money. Imagine that! When the government graciously allows Wisconsinites to keep more of their own money, they decide to spend it. Sales tax revenues increased from $4.6 billion in FY14 to $4.9 billion in FY15 – a 5.7 percent bump. But don’t wait for the mainstream media to tell you that.

Where do we even begin?

The national debt is at $18.8 trillion and counting, and yet the federal government continues to spend reckless amounts of your money. To be precise, the federal government continues to spend reckless amounts of your children’s money and your grandchildren’s money. The Clean Power Plan will cost at least $292 billion across the country. Portions of the Affordable Care Act – particularly the Healthcare Co-Ops – continue to unravel, as federal loans of $23 million, $25 million, $56 million apiece all go down the drain. President Obama has promised $3 billion to start implementing the Paris climate accords. The nonpartisan Campaign to Fix the Debt estimates that the national debt will grow by another $8 trillion over the next decade. What’s worse, the unfunded liabilities for Medicaid and Social Security alone were already at $49 trillion last year. This is simply unsustainable.

How can a government $18 trillion in debt spend more money on anything? Rather than dreaming up new ways to spend more tax dollars, shouldn’t our government be cutting every program until our books are back in balance?

All politicians, no matter the party, simply love spending too much of your hard-earned money.

We need to act now to tackle our national debt. We can no longer kick the can down the road. If we do not make tough decisions now, future generations will suffer far worse than us. The research on the harmful effect of unsustainable debts on the nation’s economy is nearly endless, and yet, no one in the mainstream media seems to care. Every time a politician proposes a new program to combat the latest manufactured crisis or increase government spending in a blatant attempt to pander for votes, the media should first ask, how can we afford this? And at every stop along the legislative process, the media should ask repeatedly, how can a country $18 trillion dollars in debt afford this?

At the end of the day, the combination of the urgency of the problem and the distinct lack of any progress to even start managing our debt makes our growing national debt the Number 1 Underreported Story of 2015.