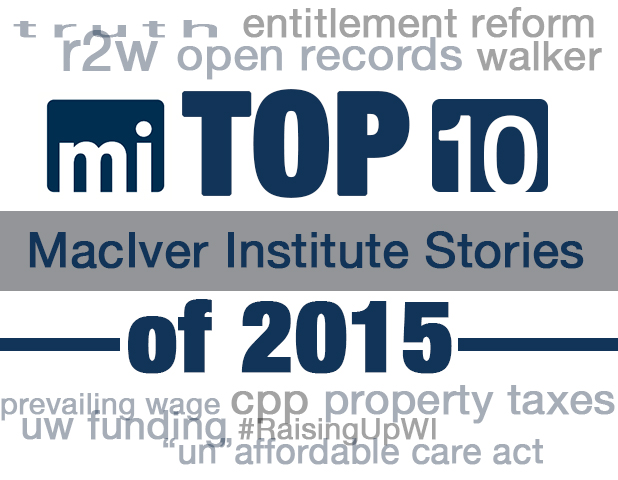 [Madison, Wisc…] It’s that time of year once again. The time where we take a moment to reflect on the stories of the year that shaped our state and our country. Any way you look at it, 2015 was another monumental year for reform in Wisconsin.

The second in our series of Top Ten lists brings you the Top Ten MacIver Stories of 2015, stories that we put a particularly bright light on that will have a long-term impact on our state. In descending order, they are…

11. Stretching The Truth Until It Snaps

Predictions of doom, gloom, pain and suffering have abounded since conservatives began reforming state government five years ago. Part of the MacIver Institute’s mission is to follow up and, when necessary, let the public know when they’ve been bamboozled.

For example, earlier this year we circled back to the stories of government workers who bemoaned the hardship that paying 12% for their health insurance and 6% towards their retirement was supposedly going to have on their lives. Some claimed they would be forced to sell their house or quit their profession. With some basic fact-checking, we discovered that one teacher who cried poverty lives in a lakefront home valued at $550,000 and others received generous raises in the years following Act 10, raises that almost made up for the amount they paid towards their benefits.

Know of a claim we should fact check? Email us your tips to info@maciverinstitute.com.

From his announcement in July…

…to his withdrawal in September, The MacIver Institute closely followed the arc of Gov. Scott Walker’s rise to a leading presidential candidate and his eventual withdrawal from the race.

Following the demise of his presidential bid, we urged Gov. Walker to be bold, as there was a bevy of bills and priorities piling up in the Capitol.

The governor was quickly back in action after returning home, so keep an eye on our website for updates on these and other priorities, including our forthcoming Top 10 To-Do List For 2016.

The 2015-2017 budget includes two more years of frozen tuition for undergraduates in the UW System, as The MacIver Institute reported in our Citizen’s Guide to the Budget, an extensive but accessible review of the complex document.

While the progressives’ solution to the problem of increasing student debt is more government programs and spending, the common-sense solution is to simply stop the skyrocketing cost of tuition in its tracks. Combined with cuts to the UW System, the predictions of ensuing chaos ran rampant. We made the journey to UW-Madison to see if buildings were crumbling, garbage was heaping, or if biker gangs were commandeering student unions.

Given the dire predictions, we were very surprised to find a tranquil and calm (at least relatively calm for the first day of classes) scene on campus.

We also investigated the teaching loads of professors in response to the idea that professors were already stretched thin and could not be expected to teach more classes to make up for the loss of state aid. UW-Madison and UW-Milwaukee responded to our open records request that they do not track the individual teaching loads of their staff. We were astonished. How can you not track the workload of your employees? How do you process your payroll if you do not track your employees’ workload?

After we recovered from our shock, we continued our search for workload data and stumbled across this: according to a report from the University of Wisconsin-Madison, faculty taught two courses and had on average just 6.3 hours of direct contact with students per week in 2012. Chancellor Rebecca Blank also told the Wall Street Journal that she offered fewer hours in the classroom as a method of retaining professors.

Contrary to the dire predictions, it turns out the UW System is surviving and indeed thriving despite the tuition freeze and less state aid. UW leaders are finding new ways to streamline their operations and save money by making relatively benign changes, and taxpayers and students alike are better off because of it.

8. Raising Up Wisconsin – the Flipside of the “Fight for 15”

The MacIver Institute in 2015 starting telling the other side of the story: success stories of real Wisconsinites who started out working a minimum wage job and, through hard work and perseverance, now own and operate their own businesses.

Here’s our most recent Raising Up Wisconsin success story:

7. Rogue EPA Tightens the Vice on Wisconsin’s Economy and Our Way of Life

The MacIver Institute spent 2015 putting the Environmental Protection Agency’s (EPA) proposed rules – the Clean Power Plan (CPP) – under a powerful microscope, starting in January when we published a joint study with the Beacon Hill Institute describing the profound economic pain Wisconsin residents and businesses will suffer if the plan is imposed.

We reported as Wisconsin joined a 26-state lawsuit against the CPP, called out an EPA administrator for claiming no future president or Congress can stop the CPP, and followed the rush on both sides of the climate divide to bash the recently inked Paris COP-21 agreement.

We will continue to follow the CPP as long as unelected federal bureaucrats continue their effort to impose the draconian regulations on Wisconsin.

6. The Continuing Failure of the (Un)affordable Care Act

When the King v. Burwell decision re-wrote a key provision in Obamacare and extended Obamacare subsidies to states that refused to establish their own ACA exchange, we said such judicial jiu-jitsu was a blow to the republic.

More recently we discovered that in 2016, Wisconsinites will have fewer, more expensive plans to choose from. We also compared those choices with the national average.

Obamacare also forced Wisconsin to change its health insurance benefits earlier this year. More recently, we described how further changes in Wisconsin, switching to a self-funded health insurance model, could help save the state millions, including savings from the “Cadillac Tax.”

And the news was even worse for the Wisconsin health insurance non-profit set up under Obamacare, Common Ground. Like many Obamacare co-ops around the country, Common Ground is bleeding taxpayer money. Despite receiving $108 million in loans from the federal government, Common Ground finished 2014 with a $36.5 million deficit, according to a report from the Inspector General’s office of the Department of Health and Human Services (HHS).

Can we finally switch the name to the Unaffordable And Complete Disaster Act?

5. Darkness Descends on the Capitol

A dark cloud descended on the state Capitol on July 3 when the legislature’s Joint Finance Committee approved a budget containing provisions severely weakening Wisconsin’s open records laws. The MacIver Institute came out immediately and forcefully in opposition to the changes:

Transparency in government is not a liberal or conservative issue, it is a good government issue. Taxpayers deserve access to government records, so they can keep politicians all across this great state honest and accountable. Therefore, it is frustrating that legislative Republicans, on the night before a holiday weekend, have taken steps to substantially weaken the ability of their constituents to gain access to crucial documents.

We found ourselves in rare agreement with Sen. Jon Erpenbach, whom we battled in a lawsuit in an attempt to obtain records from his office in 2012.

In the end, the changes were removed, and Wisconsin’s tradition of open government lives on.

4. Ongoing Property Tax Freeze Keeps Tax and Spenders Out in the Cold

Wisconsin taxpayers enjoyed another year of frozen property taxes, marking a half-decade of tax relief for homeowners, the nonpartisan Legislative Fiscal Bureau confirmed in October. The decreases of $1 in 2015-16 and $2 in 2016-17 are not as large as the $7 and $3 decreases from Gov. Walker’s original budget plan, but the LFB finds that property taxes will still be less than 2014-15 levels under the new budget.

The 2016 and 2017 fiscal years will mark the fifth and sixth consecutive years of property tax cuts or freezes. This is a big contrast from the previous decade, a time of gloom in which local property taxes skyrocketed by $1.5 billion.

3. Entitlement Reform Puts The Dignity of Work Front and Center

The MacIver Institute has pushed back against criticisms that new work requirements forced people off the FoodShare program. Sherrie Tussler, executive director of Hunger Task Force, went so far as to claim that work requirements in exchange for government assistance equals slavery. MacIver did not let that outrageous claim go unchallenged. If an able-bodied, childless adult chooses not to work a meager 20 hours a week or at least join a work training program, then the question needs to be asked: do they really need help from taxpayers?

Gov. Walker explained the philosophy behind entitlement reforms passed in 2015, which included drug testing for recipients of assistance, in an interview with The MacIver Institute at the end of the previous year:

Conservatives wrestled conservatives in the battle to repeal the state’s absurd and antiquated prevailing wage law, which increases the cost of state and local building projects by mandating inflated wages. While a full repeal wasn’t achieved, The MacIver Institute illustrated the law’s absurdity with case studies and fact checked the claims of the special interests so hell bent on keeping their carve-out of mandatory taxpayer theft.

We followed the wrangling closely:

The 2015-2017 budget ultimately included a compromise crafted by Sen. Frank Lasee: a partial repeal in which local governments are freed from the yoke of prevailing wage requirements, but the state is still stuck in the mire, leaving more work to do for legislators.

But in the meantime, at least local taxpayers will reap the tremendous cost savings of the partial repeal.

1. The Right To Work – Without Being Forced Into a Union

Bold conservatives wrote the biggest story of 2015 when Wisconsin finally extended to private sector employees the ability to choose whether to join a union or to remain independent. The legislature passed and Gov. Walker signed right-to-work legislation in May, making Wisconsin the 25th state to enact the law.