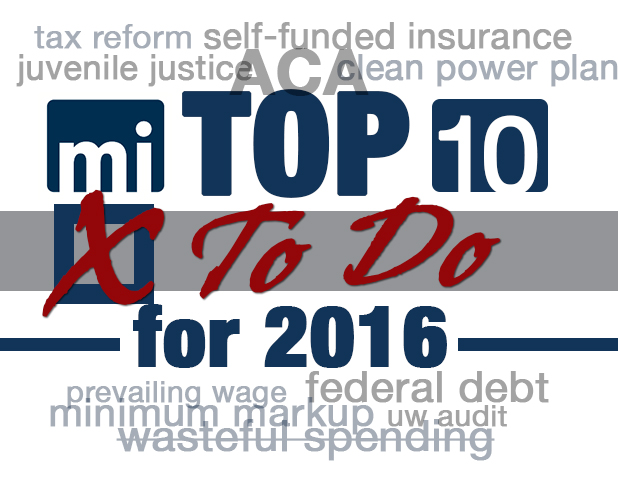 [Madison, Wisc…] Wisconsin caps off 2015 with a long list of new reforms on the books, including a right-to-work law, partial prevailing wage reform, an ongoing property tax freeze, and long-sought entitlement reform, among others.

As we enter 2016, we’re sure to see more proposals and more debate. While by no means a comprehensive list, the MacIver Institute believes these ten items should be priorities for lawmakers in Wisconsin and Washington in the new year.

10. Independent And Comprehensive Audit of UW and All Related Entities

Lawmakers discovered in 2013 that in the midst of rapid tuition increases, the UW System had accumulated large cash balances in a variety of accounts. A 2015 report revealed only a slight dip in those balances. Clearly, the UW is charging Wisconsinites more than is needed.

And how can we have an honest debate about the mission of the UW System and the proper amount of state aid for the system if we do not have accurate and complete financial information about the UW and all of its assets? The Wisconsin Alumni Research Foundation (WARF) and the UW Foundation (UWF) have grown their assets to $6 billion dollars in recent years.

While system president Ray Cross assured lawmakers recently that the slush fund controversy has been corrected, 2016 should nonetheless bring a comprehensive audit of the UW System by an independent firm.

The legislature took a swing at fully repealing prevailing wage in 2015, and missed. But the 2015-2017 budget did eliminate prevailing wage for local projects. However, projects funded at the state level are still subject to the arbitrary but mandatory wage rule.

The taxpayer savings would be huge. A six-mile ATV trail in Vilas county was initially going to cost $30,000 per mile to construct, but when the prevailing wage determination was made the price shot up to $55,000 per mile, an 83% increase paid for by taxpayers. In Waukesha County, a road flagger – those people that stand on the side of the road and turn signs to signal traffic – makes $23.55 an hour and collects $20.03 in benefits per hour. In annual salary terms, that’s a combined compensation package of $90,000 a year. 90k for a flagger? C’mon!

For comparison, the median annual household income in Wisconsin is $52,413.

Another local example was illustrative in 2015:

Changing the state’s health insurance to a self-funded model could save taxpayers millions and help the state avert a multimillion-dollar “Cadillac Tax” and Market Share Fee under Obamacare. Thanks, President Obama.

However, the Joint Finance Committee recently gave itself oversight of any such proposals.

In 2016, the fox should step away from the henhouse. It’s time for the legislature take a serious look at this important cost-saving measure.

Wisconsin has made strides in the past five years flattening its tax code and helping make the state a more attractive place to live and do business, but the work isn’t nearly done. As we’ve reported, a millionaire living just across the border in Illinois actually pays a lower tax rate than most Wisconsinites, even those Wisconsinites who make substantially less than a million dollars. That’s because Illinois has a flat tax.

Equally important, an overhaul of the federal tax code is the best way to make America competitive again.

While a major tax code overhaul has little chance of surviving President Obama’s veto stamp, it should be a continuing priority for lawmakers in Washington.

6. Get Smart on Crime by Reforming Juvenile Justice

Clearly, it is time to look for a better way of doing things. In 2016, it’s time to get smart on crime.

5. Eliminate Wisconsin’s Price Police Once and For All

Since 1939, Wisconsinites have been over-paying for everything from gasoline to groceries. The Unfair Sales Act, or minimum markup law, is a relic of the Great Depression that no longer has a place in the Internet era.

The minimum markup law is rarely enforced, but when it is, it has been used as method of keeping competition from entering markets, and preventing customers from reaping the benefits of lower prices that competition creates.

Polling also shows strong support for repeal, especially when Wisconsinites are educated about the law. Despite this, some powerful interests still oppose its repeal.

Will 2016 finally be the year we give Wisconsin’s Price Police the pink slip?

Wisconsin’s fiscal climate has improved considerably in the past several years, but there’s always more work to do. Elected officials committed to fiscal conservatism should continue to focus on finding and cutting unnecessary and abusive spending. But two common-sense reforms in particular should be considered in the upcoming year.

In 2016, the state legislature should consider zero-base budgeting reform to end the opportunities for accounting gimmicks and force every agency to justify every dollar it requests from taxpayers in each budget.

The referendum reform bill proposed by Sen. Duey Stroebel (R-Saukville) is another important reform to stop abuses of the referendum process by limiting the frequency of referenda and requiring them to be on days with other major elections, when voter turnout is highest.

These are just two examples of how the state could target and cut wasteful spending at the state and local levels – which should always be a top priority for those interested in working on behalf of taxpayers.

3. Tell The President: His Costly Power Plan is Bad for America

Americans should bemoan any blanket regulations concocted by faceless bureaucrats in Washington, but Wisconsinites in particular will pay a high price if Obama’s Clean Power Plan (CPP) moves forward.

Wisconsin joined 25 other states in suing the federal government to combat the scheme. That’s a good start, and important for prosperity in Wisconsin. A MacIver Institute and Beacon Hill study found that the CPP would cost Wisconsinites 21,000 jobs and $1.82 billion in disposable income by 2030. It also found that the CPP would cause the average household electric bill to jump $225 and would cost the average Wisconsin factory an extra $105,094 per month if implemented.

The CPP would increase electricity rates in Wisconsin by up to 29 percent, according to modeling studies conducted by Wisconsin’s Public Service Commission.

The lawsuit is currently Wisconsin’s best chance to stop the CPP in its tracks – in 2016, lawmakers and attorneys general should keep the heat on in the fight against economic ruin and bureaucratic overreach.

1. Rein in the Federal Debt

While the cataclysmic budget deficits of $1.5 trillion a year are a thing of the past, the federal budget was still $439 billion in the hole in fiscal year 2015. Years of runaway spending has put the federal debt at about $18.8 trillion, with about $2.32 billion being added each day.

The federal government spent $402,435,356,075.49 on interest alone in 2015, so in effect, the United States is borrowing money to pay the interest on its debt. Imagine how many more useful things there would be to do with an extra $402 billion a year.

The top priority for lawmakers at all levels of government in 2016 is to take serious steps to reduce spending and rein in the national debt.