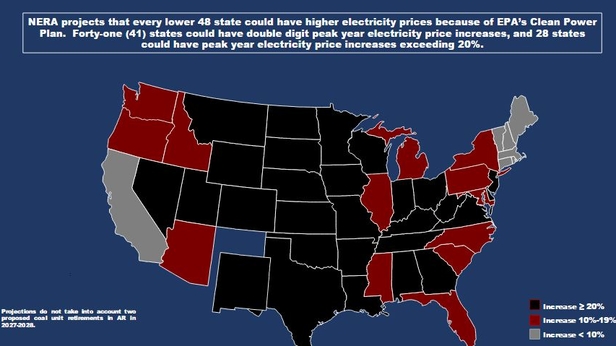 [Milwaukee, Wisc…] There is nothing a new congress or president can do to stop the Clean Power Plan outside of the bureaucratic process, according to the Region 5 administrator speaking at a forum in Milwaukee on Wednesday morning.

“The Clean Power Plan was established through the standard federal rulemaking process. Any change would have to go through that process to promulgate a new rule,” Dr. Susan Hedman, EPA Region 5 Administrator, said at the event hosted by the Godfrey and Kahn Law firm.

MacIver News asked her for an interview to clarify that comment. She said she would consider it and then snuck out the back.

The EPA is not just facing potential challenges from within the federal government. States and industry groups have filed lawsuits against the Clean Power Plan (CPP). The EPA says it is within its authority granted by the Clean Air Act, while challengers say the EPA has overstepped its rulemaking authority under that law.

Wisconsin is one of the two dozen states participating in those lawsuits. Delanie Breuer, Assistant Deputy Attorney General, also spoke at Wednesday’s forum, laying out the legal case against the EPA.

“It’s not about if they can regulate carbon,” She explained. “The issue is how they’re regulating carbon.”

Unwilling to take questions from the media, EPA Region 5 administrator sneaks out of forum early. #wiright

The EPA adminstrator appeared unfazed by the legal challenges.

If the stay is not granted, states will be required to submit their state implementation plan (SIP) or request an extension by September 6, 2016. Each state has its own individual assigned benchmarks the EPA will require it to achieve. Overall, CPP’s goal is to reduce carbon emissions by 30 percent below the levels in 2005.

“I think it’s wise for states in general to hold off until we hear about the stay,” Breuer warned. “The minute that we have a state plan with any certainity in it, the regulated utilities will begin to comply and spend your ratepayers’ dollars to comply.”

If states choose to not submit a SIP or extension request, the EPA will force a federal implementation plan (FIP) on them. Even after that happens, states would still be allowed to submit a SIP to replace the FIP at any time. That’s an option already being considered by the Wisconsin Attorney General’s office.

“We are weighing our options” Breuer said. “[Later we can] create a state plan that dovetails with the federal plan.”

The EPA Administrator acknowledged, “There’s a lot riding on the decisions states will make in the next year.”

She made no apologies for the plan or the way it is being implemented, calling it a “fair and flexible plan.”

“Powerplants are the largest source of carbon emissions,” Hedman said. “These are the first federal limits on electric powerplants.”

A MacIver Institute Study found that the plan will cost Wisconsin 21,000 jobs and $1.82 billion in disposable income by 2030. It also found the average household electric bill would be $225 higher under the CPP. Also, the cost to the average factory would be an extra $105,094 a month.

“We’re really afraid that our manufacturers will leave the country and go to other places with less restrictions,” Breuer said.

Hedman, on the other hand, said, “Let me put it this way. The cost is an issue fully in the hands of each state.”

According to Wisconsin Public Service Commission, modeling studies show that the president’s proposed rule will increase electricity rates in Wisconsin by up to 29%. Hedman said that doesn’t mean customers will have bigger bills though.

“Rates could go up, but because of efficiencies, consumers will use less electricity and bills will go down,” she said.

Hedman talked about the three main options the EPA has presented to states, they can use in compliance plans. One: they can improve efficiency of power plants; two: they can shift from coal to natural gas; and three: they can shift from fossil fuels to wind/solar. Critics say it is not possible to use those methods to comply with the proposed standards.

“We’re just not there with the technology,” Breuer said. She explained that the Attorney General and other critics are not opposed to reducing carbon. In fact, Wisconsin industry has spent $11.6 billion over the past decade to do so. She said what they really want is for the EPA to leave the state alone while it continues to pursue that goal in its own way.

“We need the EPA to listen to us when we say this is what our fleet is capable of and here is the remaining life expectancy of that fleet. Let us manage it,” she said.

The EPA has another option for states that Dr. Hedman explained. Stakeholders can trade carbon credits through an EPA managed system. The current plan would have the EPA match credits for wind and solar projects and for projects in low income neighborhoods. However, that credit program is still under development and won’t be finalized before next summer, right before the SIPs are due.

Godfrey and Kahn, S.C. did not take a position for or against the CPP during the forum, which focused on identifying different issues, factors, and concerns of all sides. The facilitator, Art Harrington, began the event with a question for participants to ponder, “Are you going to sit tight during the litigation, or plan for the implementation?”

The law firm would not allow MNS to videotape the event, and did not disclose who made that decision.