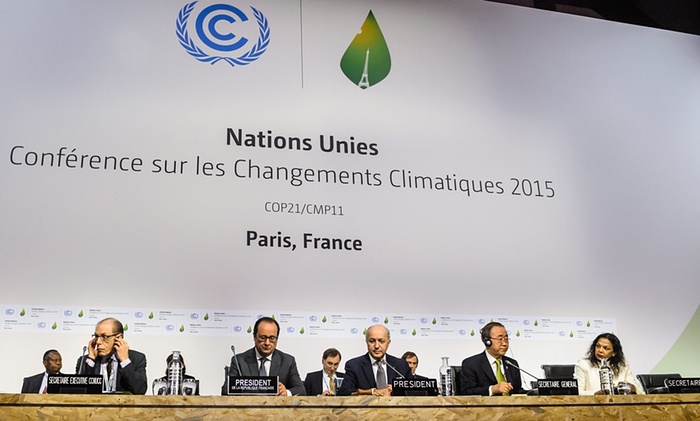 [Paris, France…] The Paris Climate Conference, also known as the 21st Conference of the Parties (COP21), concluded Saturday, yielding an international accord that activists on both sides of the climate divide have assailed.

Nearly 200 countries signed the agreement on Saturday, which President Obama touted as “the best chance we have to save the one planet that we’ve got,” and “a turning point for the world.”

“It’s a fraud really, a fake…It’s just bulls*** for them to say: ‘We’ll have a 2C warming target and then try to do a little better every five years.’ It’s just worthless words. There is no action, just promises. As long as fossil fuels appear to be the cheapest fuels out there, they will be continued to be burned.”

Climate change skeptic Marc Morano asked, tongue-in-cheek, if we can focus on other issues now that the global warming problem is “solved”:

Morano on 'historic' UN treaty: 'Does this mean we never have to hear about 'solving' global warming again!?' https://t.co/6NmIfX3LB5

Other opponents of the accords blasted assertions by the Obama administration that the agreement doesn’t need Congressional approval because its provisions aren’t legally binding, a claim that doesn’t sit well with Sen. Jim Inhofe (R-OK):

“Once again, this administration is all too eager for the international community to review its commitments before even revealing those commitments to the American people,” said Sen. Jim Inhofe of Oklahoma, chairman of the Senate Environment and Public Works Committee.

“[A]s he focuses on bolstering his international reputation as a ‘serious leader’ on climate change, he is neglecting to recognize the dangerous impacts his Clean Power Plan will have on his own country, particularly in manufacturing-heavy states such as Wisconsin.”

The CPP would increase electricity rates in Wisconsin by up to 29 percent, according to modeling studies conducted by Wisconsin’s Public Service Commission.

If the carbon reduction pledges that the Obama administration made in Paris are to be achieved, implementation of the CPP is essential. But the proposal was unable to pass Congress even when it was controlled by the president’s own party. The Environmental Protection Agency is now implementing the plan via the federal rule-making process instead.

“The President is making promises he can’t keep, writing checks he can’t cash, and stepping over the middle class to take credit for an ‘agreement’ that is subject to being shredded in 13 months.”

Dr. Benny Peiser, director of the U.K.-based Global Warming Policy Foundation, said the deal is essentially toothless, which he says is a positive:

“In contrast to the Kyoto Protocol, the Paris deal removes all legal obligations for governments to cap or reduce CO2 emissions…This voluntary agreement also removes the mad rush into unrealistic decarbonisation policies that are both economically and politically unsustainable.”

Removing the “mad rush” to wind and solar power and the voluntary language was a disappointment for climate activists, though.

“This didn’t save the planet,” said Bill McKibben, climate activist and founder of 350.org. The website also offered a less-than-exuberant review of the Paris accords:

“If followed to the letter, the agreement leaves far too many people exposed to the violence of rising seas, stronger storms and deeper drought. It leaves too many loopholes to avoid serious action — despite the heroic efforts from leaders of vulnerable nations and communities who fought for a deal in line with science.”

As for what American citizens can expect next, Inhofe has an ominous prediction:

“What is significant for the United States is that we can expect the administration to cite this ‘agreement’ as their excuse for establishing emission targets for every sector of the U.S. economy not only including utilities, but petroleum refining, all manufacturing, agriculture, and others.”