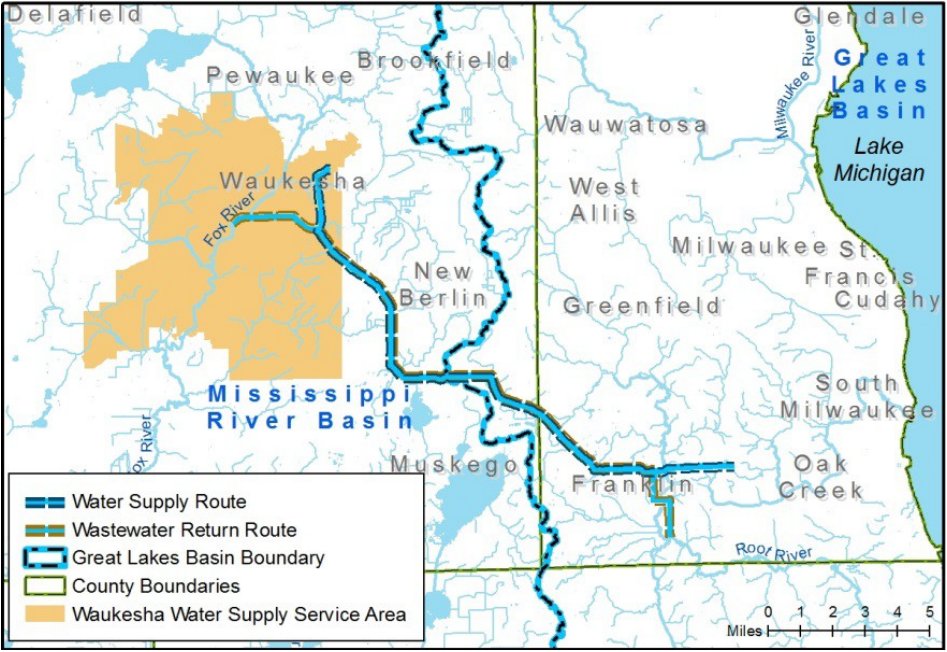 The city of Waukesha produced a timely reminder of what will happen if the city’s application for a diversion of Lake Michigan water does not go through. At a recent meeting of the common council, the city formally annexed land purchased from the Town of Waukesha with the intention of drilling new shallow wells if Waukesha residents are not able to get water from the Great Lakes.

If the city of Waukesha’s application for a diversion of Lake Michigan water is not approved, the city will be forced to dig more shallow wells to dilute the radium in the city’s drinking supply. It will do more than just cost a lot. Digging more shallow wells will harm the environment by affecting rivers, streams and marshes in Waukesha County.

The city of Waukesha is under a federal court order to reduce the amount of radium in the drinking water to comply with rules set by the Environmental Protection Agency. The radium in the drinking water comes from draining a deep aquifer that is replenished in Jefferson County and wends its way underneath Waukesha towards Milwaukee County. As the water levels in the deep aquifer go down, the amount of contaminants rises, presenting an environmental and health hazard to city residents.

Under the Great Lakes Compact preventing Great Lakes water from being used outside the Great Lakes basin, an exemption was carved out for communities in counties that straddle the edge of the basin. Because Waukesha County straddles the line, the city qualifies for an exception provided there is no reasonable alternative and there is a return route to Lake Michigan for the water taken. It’s a diversion of water, and all of the water used will be returned via the Root River meaning Lake Michigan’s water levels will not be affected..

The exemption was carved out with Waukesha in mind, and Waukesha is the first community to apply under the Great Lakes Compact. It was why former DNR Secretary and Wisconsin Wildlife Federation Executive Director George Meyer said in support of the compact at a public hearing:

“It is no accident that the Mayors of Waukesha and New Berlin, the two communities who have expressed interest the most immediate interest in Great Lakes water, are supporting the Compact. They know that the Compact improves their opportunity to obtain water from Lake Michigan.”

The DNR agreed with the Waukesha Water Utility’s conclusions that Lake Michigan was the only reasonable long-term source of water for the city of Waukesha. Not only would digging more shallow wells be more costly than building a pipeline to a supplying community, the shallow wells would actually have a detrimental environmental effect on the surface water features of Waukesha County and could potentially affect surrounding communities.

Oak Creek will be Waukesha’s water supplier once the DNR grants final approval and Waukesha’s application is approved by each of the governors of the Great Lakes states. Milwaukee would have been the preferred supplying community because of the shorter distance, but they took themselves out of the running despite having excess capacity at their water treatment facility.Just to spite Waukesha and also using the size of the water service area as an excuse, Milwaukee water utility users will continue to pay higher rates because of the unused capacity.

Despite the careful analysis by the DNR and the Waukesha Water Utility, Meyer’s group and other environmental groups are now opposed to Waukesha being granted the exemption under the Great Lakes Compact claiming that the water service area is too large. Of course, the water service area is set by state law and SEWRPC, but don’t let the facts get in the way of Waukesha bashing by Milwaukee-based liberals.

Under the Great Lakes Compact, a governor cannot be as capricious as the city of Milwaukee in rejecting Waukesha’s application. A denial by any governor, as Meyer testified to the legislature in 2008, “…must be based on objective standards and defended by that Governor in federal courts.”

It’s too bad that environmental groups like the Wisconsin Wildlife Federation also aren’t required to hold themselves to objective standards. Because if their wish comes true, the environment in Waukesha will pay for it one new shallow well at a time.