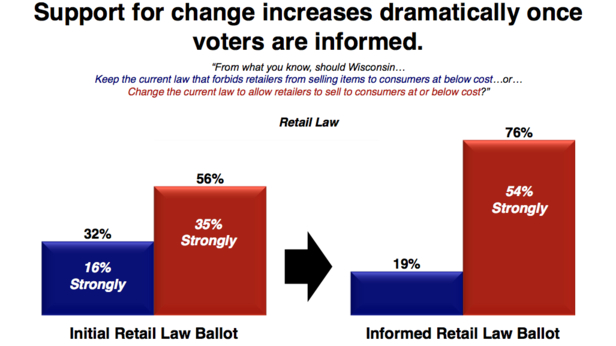 The poll indicates that support for changing the law cuts across partisan, ideological, and regional lines in the state. The more voters learn about the law, they more likely they are to oppose it. They are also more likely to feel passionately about the issue with increased knowledge, with 54 percent indicating that they feel strongly about wanting the law changed after learning more.

Individuals were most responsive to arguments that stressed the increased prices which result from the Unfair Sales Act.

For example, 81 percent of individuals said they were more unfavorable to the law when told that “the law forbids retailers from selling to consumers below cost also requires that gasoline retailers sell gas to consumers with a minimum nine percent markup, meaning Wisconsin drivers have to pay more for gas here than drivers do in other states.”

That number fell slightly to 80 percent when they were told that “Wisconsin residents are required to pay more for many on-sale items than residents in neighboring states simply because of this seventy-five year old law.” Seventy-nine percent reported themselves as unfavorable to the law when learning about its effects on Black Friday and back-to-school sales.

Gene Ulm, a pollster at Public Opinion Strategies, said that the results of the poll were clear.

“Not only do Wisconsin voters favor making changes in Wisconsin’s Minimum Markup Law, but those who know the most about it are the most supportive of change,” Ulm said. “Further, there is clear evidence from the polling that the more voters hear about this issue and some of the arguments in support of changing it, the more energized and intense their opinions become.”

As the MacIver Institute has previously reported, the minimum markup law bans retailers from selling merchandise below cost. Supporters of the law say that it’s necessary to protect small businesses from the Wal-Marts of the world, arguing that without the law, those small “Mom and Pop” stores would close. Those in opposition argue that other states fare well without the law, and savings are passed on to consumers.

In one example, the MacIver Institute obtained advertisements from Wal-Marts in the Chicago, Milwaukee, and Minneapolis areas. On products ranging from DVDs to school supplies, Wisconsin consumers would pay up to 150 percent more than Illinoisans or Minnesotans.

The MacIver Institute spoke with Senator Leah Vukmir (R-Wauwatosa) when she introduced a bill to repeal the law.

“It’s an archaic law that needs to go,” Vukmir said. “Those of us who believe in free markets and capitalism believe that it’s absolutely wrong to have arbitrarily set costs created by government.”

The minimum markup law, which has been in place since 1939, dictates that companies who set their prices too low can be fined up to $500 for the first violation and up to $2,500 for each subsequent violation. Price markups range from 3 to 9.18 percent, depending on the product.

Meijer, a Michigan-based chain, recently made headlines when it opened its first Wisconsin locations. Several complaints were filed with the Department of Trade and Consumer Protection (DATCP), alleging that items had illegally low prices.

Items affected by the law range from gasoline, alcohol, and medications, to food items such as milk and beans.

Wal-Mart has a $4 generic prescription drug program which offers low-cost medication to consumers across the country. Wisconsin is exempt from that program because of the minimum markup law, and consumers are forced to pay more.

Sen. Vukmir and Rep. Jim Ott (R-Mequon) introduced Assembly Bill 452 (AB 452), which would repeal the Unfair Sales Act, back in October. So far, the hearing has yet to be scheduled for a public hearing in the Assembly Committee on Small Business Development.