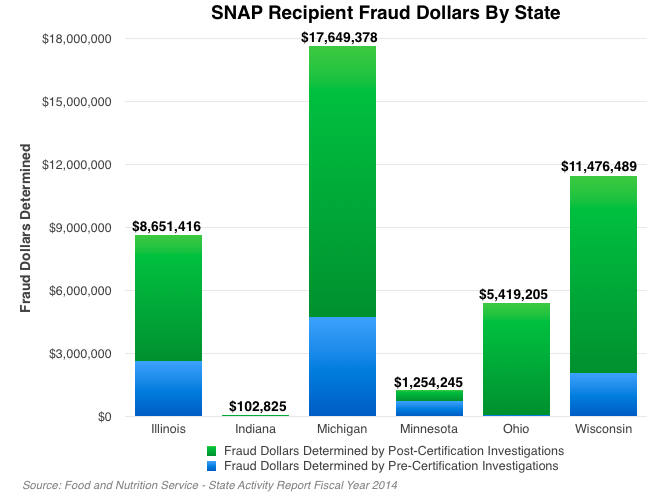 [Madison, Wisc…] This Tuesday, the name of the game on the Assembly floor will be public benefits reform.

Fraud continues to be a major problem that ripples through both the UI and the FoodShare programs. The Office of the Inspector General (OIG), which is part of the Wisconsin Department of Health Services (DHS), is charged with detecting and preventing waste, fraud, and abuse in public assistance programs.

At the federal level, the Food and Nutrition Service (FNS) produces a report on abuse within SNAP. During fiscal year 2014, FNS found $11,476,489 in fraudulent payments. The FNS conducted just over 6,700 fraud investigations tracking that fraud.

As the MacIver Institute previously reported, a December 2014 audit discovered over $86.3 million in fraudulent overpayments in Wisconsin over a three year period. In response to the audit, Rep. Samantha Kerkman (R-Salem) introduced Assembly Bill 212 (AB 212), which would render individuals ineligible for UI benefits for seven years if they are found to have twice intentionally misrepresented or concealed valuable information when applying for benefits.

According to current law, individuals who are found to intentionally file fraudulent claims are subject to criminal charges, but are still able to apply for UI benefits. During the public hearing, Kerkman said that only three people were prosecuted last year for defrauding the system. She argued that we need a new and more effective tool to stop systematic abuse of the program.

While debating the bill in the public hearing, committee members called Kerkman’s bill “mean-spirited” and too harsh, saying that it could literally be taking food off of peoples’ tables. Kerkman responded in earnest.

“I want people to remember: fraud is theft,” Kerkman said. “We need to give the department tools and to make the system stronger for those who really need it. That is my whole goal.”

In her testimony, Kerkman recognized the potential for honest mistakes, which is why individuals will not be kicked off the system after one strike.

AB 212 was eventually voted through the Assembly Committee on Public Benefit Reform on a 9-5 party line vote.

The three other public benefits reform bills slated for Tuesday all have to do with the Supplemental Nutrition Assistance Program (SNAP), also known as FoodShare in Wisconsin and formerly known as food stamps. The program now uses what are called Quest cards, which act similarly to pre-loaded credit cards.

SNAP is administered at the federal level and is paid for by federal as well as state dollars. As a result, there are many more regulations in place that make it difficult for state legislators to change the rules surrounding the program. In the case of both Assembly Bill 222 (AB 222) and Assembly Bill 200 (AB 200), state legislators had initially planned to apply for waivers from the federal Department of Health Services (DHS) to allow them to change rules at the state level.

Perhaps because of the difficulty and uncertainty of asking the Obama administration for permission to more efficiently manage the program, legislators heavily amended the bills. Wisconsin will no longer ask the federal government for the waivers needed, substantially weakening the effort to address fraud and abuse.

In its original form, AB 222 would have asked the federal government for a waiver to allow Wisconsin’s DHS to add photo IDs to Quest cards. Under the amended bill, clerks will no longer be required to ask to look at the card to verify the photo and identity of the person using the card.

At the executive session for the bill, democrats questioned why the bill was still being considered, given the amendment.

“Why do this amendment rather than simply withdrawing the bill?” Rep. Lisa Subeck (D-Madison) asked. “If we’re going to put these pictures on the cards yet nobody needs to see them, we are wasting taxpayers’ money. There is no effective impact on fraud or anything else. We are looking at over two million a year in ongoing costs, let along that seven-ish million in startup costs…and we’re going to throw that money away to put photos on cards, I guess for fun.”

AB 200 originally would have limited the number of replacement food stamp Quest cards to four in any 12 month period. Now, the substitute amendment does away with the four card maximum and instead requires DHS to send a letter to an individual once they have requested four replacement cards.

AB 200 followed a similar path. Under the original bill, DHS would have applied for a waiver to ask the federal government to allow them to limit the number of annual replacement Quest cards to four per recipient per 12-month period. The substitute amendment does away with the waiver and instead requires DHS to notify individuals by letter that they have requested an excessive amount of replacement cards once they receive four. At five cards, the OIG must investigate for fraud. At six cards, the recipient must contact DHS directly in order to request a replacement, and DHS is charged with educating the recipient on the proper use of the card.

After the executive hearing of these two bills, the MacIver Institute asked DHS how many replacement cards they have issued per recipient in the past three years. The agency is still determining an accurate number.

The final public benefits reform bill is Assembly Bill 188 (AB 188), which requires DHS to remove FoodShare benefits from a recipient’s account if it has not been accessed in six months or longer. Should the recipient request to access the account or reapply for benefits, the benefits must be made available again. DHS is required to notify the recipient before removing the benefits and must expunge benefits that are not used for one year or longer.

AB 188 was passed on an 8-5 party line vote when it went through the Assembly Committee on Public Benefits Reform.

The Assembly floor session begins at 1pm on Tuesday, November 3. The MacIver Institute will continue to provide live coverage via our Twitter, @MacIverWisc.