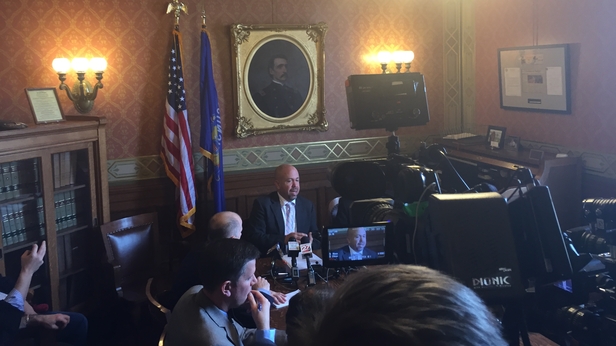 Rep. Jim Steineke (R-Kaukauna), the main author and sponsor of the bill, started and ended debate.

.@jimsteineke starting off arguments on the floor for his bill, reforming civil service #WIpolitics

"You don't want someone to be working for the state who's been stealing from the state".@jimsteineke making the case for #civilservicereform

"We want the best&the brightest working for the state and we don't want to presuppose who that will be" .@jimsteineke defending ban the box

Minority Caucus Chair Rep. Andy Jorgensen (D-Milton) followed up with a prediction that turned out to be true.

.@RepJorgensen making what he thinks will be the first of many references to Bob La Follette #CivilServiceReform

.@RepJorgensen saying after the bills GOP has passed this week, "it's like you're on drugs of some sort"

Debate in the WI Assembly over the civil service bill has elevated to a moderate level of tension.

Rep. Gary Hebl rises in support of moving #CivilServiceReform back to committee.Mentions how ashamed Bob La Follette, a republican, would be

.@RepHesselbein saying .@GovWalker pushed for this bill as an attempt to get political attention 48h after dropping out of presidential race

.@RepHesselbein says #CivilServiceReform bill will create fear in the workplace, "the nasty face of divide and conquer"

Speaker Robin Vos (R-Rochester) struck back at Democrats who said they weren’t involved in the bill’s full process. He questioned why they introduced nine amendments on the floor without letting Republicans consider them beforehand.

.@SpeakerVos says politics didn't drive bill: "All of us ran because we believe in something. I believe in reforming government."

.@repvos says even with reforms, public system will still be "much less nimble" than the private sector #CivilServiceReform #wipolitics

.@repvos says its funny that those on the left don't want to test kids in schools as much, but defend exam for civil service workers

Rep. Mandela Barnes (D-Milwaukee) acknowledged that he liked the ban the box provision in this version of the bill. As the MacIver Institute previously reported, Rep. Steineke’s Assembly version bans the box on thats asks individuals if they have substantially related felony charge. The Senate version of the bill keeps the box, which may lead to issues down the line. Barnes said the provision actually didn’t go far enough, and said it should extend to public and private employees across the state.

.@TheOtherMandela likes the #banthebox provision in .@jimsteineke's version of this bill but wishes it was extended to private employees too

Throughout the night, legislators clashed on whether or not resumes are an appropriate method of whittling down candidates.

.@RepKessler says resume selection is "absolutely a subjective thing, and the perfect occasion to put your political allies into state jobs"

As part of his closing argument, Rep. Steineke read from Obama administration documents which support the reform of civil service. He argued that if the President supports civil service reform, then it’s not a strictly republican issue or a power grab, as Assembly Democrats alleged throughout the night.

Author .@jimsteineke back up to defend the bill: says it is not partisan, reading from article saying Obama's administration doing the same

In the end, the bill was voted through on a 57-35 vote and will now go to the Senate.