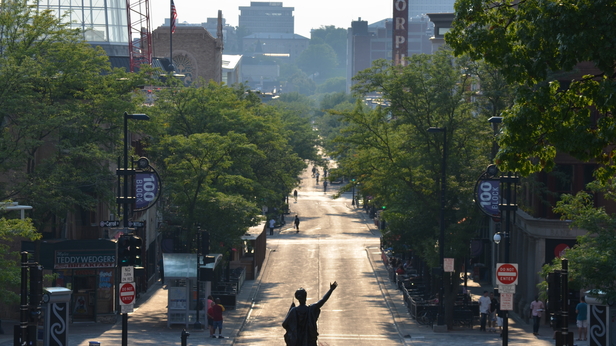 Privately-funded efforts in Louisiana led to a drop in prison violence, culture

[Madison, Wisc…] Corrections reform was the topic in one State Capitol room on Tuesday as Rep. Rob Hutton (R-Brookfield) hosted a presentation featuring speakers from Louisiana and Texas. Over the course of two hours, a largely bipartisan audience heard about privately-funded efforts in these states to change prison environments.

The main speaker at Tuesday’s event was Warden Burl Cain, who was appointed the position of Warden at Angola State Penitentiary in 1995.

Angola State Penitentiary – the country’s largest maximum security prison – has long had a reputation for being particularly violent. According to Louisiana’s Department of Corrections, roughly 75 percent of the inmates there are “lifers” serving life sentences.

“They sent me there and I didn’t want to go, because it was such a bad place,” Cain said. “The warden got fired about every five years, there was murder, blood, violence everywhere.”

Once the country's most violent prison. Now offers accredited programs such as in mechanics so inmates contribute to society when they leave

In the mid-90s, Cain invited the New Orleans Baptist Theological Seminary to teach courses for interested inmates. In the 20 years that have followed, roughly 250 students at Angola have earned their bachelors degrees in ministry services while serving their sentences.

These programs are entirely privately funded by various donors, are open to all denominations, and are only open to willing pupils who have their GEDs.

“We don’t use any tax dollars, we’re not talking about any tax burden at all,” Cain said. “Having a community really get involved in the prison, from a distance…from support for programs, supporting the seminary…the outcomes were phenomenal.”

Many of these individuals go on to become a part of Angola’s Inmate Minister program. These men are held to a higher standard of behavior as role models within the prison. They become leaders within their prisons, teaching “non-lifers” morality and philosophy. Within the insulated prison community, “lifers” carry much more clout, influence, and respect.

Since the seminary was built, Angola has seen murders, escapes, assaults on staff, and assaults on inmates all drop dramatically. In 1994, the year before the program started, there were 1,042 violent incidents. In 2015, there were 344, amounting to a 67 percent drop.

Other than the hard numbers, Cain says the entire culture within the prison has changed. He described how female guards can freely walk through the cellblocks on death row with no fear of assault.

“It provided for an environment of change and the inmates themselves were the ones who changed,” Cain said. “If you want to change a prison, you have to change the people inside the prison. But you have to lead them to do the change.”

As Cain describes it, after going through the program, the inmates are not only educated in philosophy but they become moral men. That, he says, makes all the difference.

The results at Angola inspired Grove Norwood and others to move the initiative to Texas, where the Heart of Texas Foundation just celebrated its first graduation in 2015. According to Norwood, all 33 graduates will move to other prisons around the state to become leaders within the prisons and to influence change.

These initiatives are a unique look at criminal justice reform. They emphasize a charitable approach to giving – private citizens donate money to change the prison culture rather than the state itself footing the bill for all programs.

Other than the participation of the seminary on prison grounds, Angola also has extensive GED and vocational training programs. Individuals who are short-term offenders have the opportunity to learn a trade and make a meaningful living.

In this way, the state doesn’t just lock up criminals and throw away the key. While inmates serve, they have the opportunity to turn their lives around and become productive members of society – even if they carry life sentences.


Norwood and Cain both stressed that each of their states incarcerate large amounts of people, a trend which they do not intend to change. What they will change, though, is their approach to thoughtful and cost-efficient reforms. For now, they are willing to travel state-to-state, as they did Tuesday, to spread the word.

As the Chair of the Assembly Committee on Corrections, Rep. Hutton has focused on criminal justice reform for some time. At the event’s conclusion, Hutton stressed the bipartisan nature of the issue and urged attendants to consider thoughtful reforms with proven results.

“We must understand the important role of the faith community in fostering meaningful reform within our prison system,” Hutton said. “The life changing impact we’re witnessing in Louisiana and Texas is a case in point.”

Hutton is author of Senate Bill 280, which would return first-time nonviolent 17-year-old offenders to the juvenile justice system. Research shows the effort would save tax dollars as well as decrease the number of juveniles returning to prison later in life. That bill is currently in the Senate Committee on Judiciary and Public Safety, where it has yet to be scheduled for a hearing.