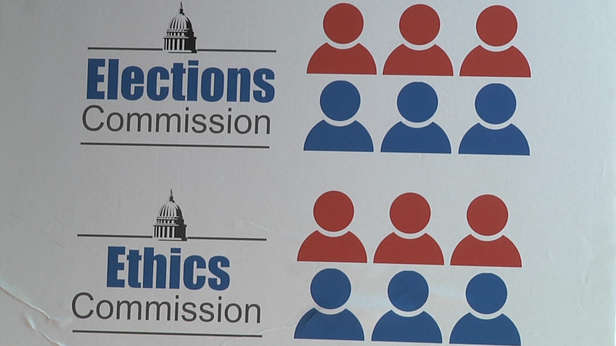 [Madison, Wisc…] Republican lawmakers announced their plans to dismantle the state’s controversial Government Accountability Board on Wednesday, following years of evidence that the agency’s staff abused their positions and overstepped their authority.

Assembly Speaker Robin Vos (R-Rochester) and Rep. Dean Knudson (R-Hudson) unveiled the plan at a press conference that calls for the creation of two new commissions: one for elections and one for ethics. The new agencies would start on June 30, 2016.

Each commissioner would serve a five-year term.

“It was a well-intentioned, eight-year experiment,” Knudson said of the GAB. “One that at one time was held up as a model for the nation. What we now see is that no other state has followed that model, and I don’t believe that any other state ever will.”

The Assembly Speaker echoed concerns about the GAB.

“For the last eight years we’ve seen one problem after another, an unconstitutional investigation, serious lapses in the oversight of our elections and, in some cases, staff that went rogue,” Vos explained.

The GAB was created in 2008 as attempt to take controversy and corruption out of Wisconsin elections. However, for most of its existence, the agency has mired in controversy.

The actual board consists of six retired state judges, who are appointed by the governor and serve part-time. Full-time staff members run the agency’s day-to-day operations and prepare materials for the board. They are supposed to be non-partisan, but much evidence has arisen to the contrary.

Starting with the recall elections in 2011, the GAB was bombarded with questions concerning its effectiveness, efficiency and integrity. The agency was able to produce few answers to satisfy the evidence against it.

When the recall petition was filed against Gov. Scott Walker, the GAB made a number of high profile missteps. For example, the agency said it would not verify the validity of the signatures, and it would not allow outside groups to participate in verification. In fact, if a resident discovered someone else had signed their name to a petition, the GAB stated it would still count. Also, staff stated they were even willing to accept signatures from Mickey Mouse and Adolf Hitler as valid.

The agency distanced itself from overwhelming evidence of election fraud in Racine during the recall elections. During the recount process there, it was discovered voters did not sign the poll book, new voters did not provide addresses, unmarked ballots were pre-initialed, ballot bags were tampered with and there were potential breaks in the chain of custody.

After the legislature passed the photo ID law in 2011, the GAB was accused of high jacking it by creating rules on how it would be executed, which it did not have the legal authority to do.

For most of the GAB’s existence, Republicans have held both chambers of the legislature and the governor’s office, while Democrats have consistently lost elections and seat across the state. Curiously, though, Republicans are the ones calling the GAB out for corruption, while Democrats come to its defense.

Republicans have been talking about reforming or overhauling the agency for years. The last time major reforms were announced, the Senate led the way.