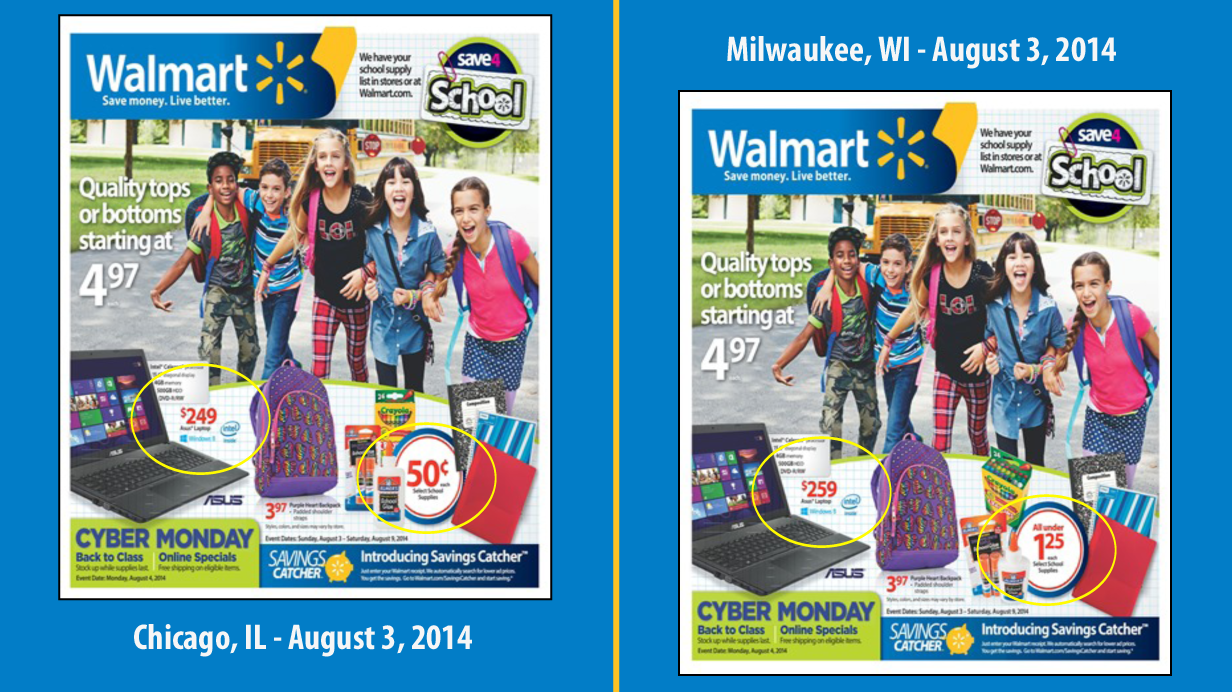 Retailers Can Offer Lower Prices to Consumers in Illinois and Minnesota

[Madison, Wisc…] Back to School shopping was more costly for Wisconsin parents thanks to a decades-old law that artificially raised prices on products from markers and colored pencils to notebooks and computers.

That law – the Unfair Sales Act – bans retailers from selling merchandise below cost. In many cases it leads to higher prices in Wisconsin compared to other states. Also known as the minimum markup law, the Unfair Sales Act requires a minimum price increase over the cost on goods like alcohol, tobacco and gasoline.

The “minimum markup” can be as high as nine percent on these three goods. Most other merchandise sold in Wisconsin, however, simply cannot be sold for lower than the retailer paid for the product.

Unfortunately for Wisconsin consumers, the law required Wal-Mart to charge higher prices in the Badger State.

According to advertisements obtained by the MacIver Institute from August and November of 2014, Wal-Mart stores in Milwaukee had prices for some goods that were as much as 150 percent higher than in Chicago or Minneapolis markets.

Parents looking to buy a new computer for their kids in Chicago could purchase an ASUS laptop for $249, however Milwaukee parents had to fork over an extra $10. Chicago Wal-Mart locations were selling Crayola Crayons and Elmer’s Glue for 50 cents a piece. Milwaukee consumers had to pay as much as $1.25 for each of these popular school supplies.

While 42 cents may sound cheap for 70-sheet notebooks in Milwaukee, Chicago consumers could buy the same exact product for just 25 cents – a premium of 68 percent for Wisconsin parents.

Board games also saw the unfortunate price increase thanks to Wisconsin’s Unfair Sales Act. Minneapolis Wal-Marts advertised the Minnie Mouse edition of Candy Land for $9.88, but Milwaukee consumers had to pay $10.77.

Some of these price differences may not seem dramatic, but if Wisconsinites could pay for each product the price advertised in a different state, they could have saved nearly $20 on just 12 items. Fortunately for families in Illinois and Minnesota, they were able to take advantage of those savings.

The $17.58 in savings would be enough to buy another Blu-Ray movie at Wal-Mart, seven gallons of gas or three Big Mac Meals at McDonald’s.

“As we continue our focus on statewide reforms, it is important we further address those laws that artificially regulate the free market and economically harm the average hardworking Wisconsin family,” Rep. Rob Hutton (R-Brookfield) told the MacIver Institute.

And that is exactly what is happening.

Sen. Leah Vukmir (R-Wauwatosa) and Rep. Jim Ott (R-Mequon) have introduced a bill that would eliminate the Unfair Sales Act. If it becomes law, large stores like Wal-Mart and small mom and pop retailers in Wisconsin could sell products for whatever price they see fit, even if the business would lose money.

Already, multiple legislators are standing behind Vukmir and Ott, including Sen. Alberta Darling (R-River Hills), who is co-chair of the powerful Joint Committee on Finance.

“I support eliminating the minimum markup law because it hurts Wisconsin’s working families by making it more expensive to live here and makes our state less competitive,” Darling said.

Rep. Dave Murphy (R-Greenville) told the MacIver Institute in an interview that the government has no place regulating businesses in such a manner.

“I think this is a bill that is about the free market. It is good for consumers,” Murphy said. “It is a chance for government to say we are getting out of the business of setting prices.”

Vukmir and Ott’s bill was released for co-sponsorship last week. It is not yet known if and when the bill will get a public hearing. The MacIver Institute will continue to provide updates as they come available.