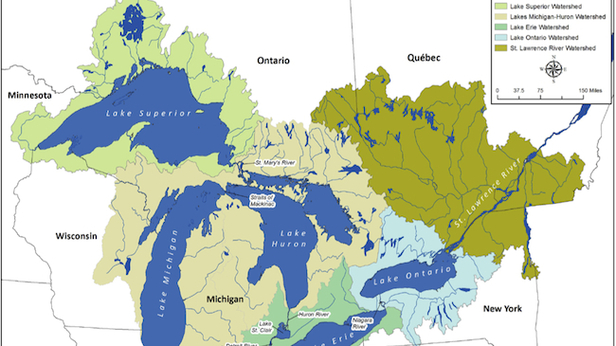 On Friday, a coalition of Milwaukee-based liberal organizations submitted to the Department of Natural Resources a 21-page statement in opposition to Waukesha’s water application. The organizations are: Milwaukee Inner-City Congregations Allied for Hope (MICAH), the Sierra Club John Muir Chapter, the Milwaukee Branch of the NAACP and the ACLU of Wisconsin Foundation. The statement claims that a diversion of Lake Michigan water for Waukesha will enable “urban sprawl.” This will cause more businesses and industry to flee Milwaukee for the suburbs, harming the African American population in Milwaukee.

Of course, the city of Waukesha’s water application isn’t about “urban sprawl.” It’s about providing a secure source of clean water for a city as old as Milwaukee.

The city of Waukesha is under a court order to meet federal guidelines regarding the radium content in the drinking water. In addition, years of drinking from the deep aquifer has lowered water levels to the point which threatens the long-term sustainability of Waukesha’s water supply. Digging more shallow wells to blend water with the deep aquifer will have an effect of nearby surface water features: 700 to 2,300 acres of wetlands, lakes and streams according to the DNR. It will also place the city in endless conflict with its neighbors over annexation to site the wells.

The solution is in the Great Lakes Water compact. The compact, passed in 2008 with bipartisan support, allows for communities in counties that straddle the boundary of the Great Lakes Basin to apply for a diversion of water from the lakes. Communities beyond the basin but in the qualifying counties are required to return approximately 100% of the water taken so Great Lakes water levels will not be affected.

This diversion provision was put into the compact with everyone recognizing at the time that Waukesha would be the first community to apply. So far the DNR, in a draft report, has agreed with the city that the only reasonable long-term source of fresh water for Waukesha is Lake Michigan.

With science and logic against them, opponents of Waukesha’s application are trying to use the region’s historic racial segregation. “Allowing a Lake Michigan water diversion to enable continued unrestrained sprawl and job migration will have the inevitable effect of perpetuating racial and economic segregation in the region, to the clear disadvantage of persons of color, especially African-Americans,” according to a statement by Fred Royal, president of the Milwaukee Branch of the NAACP in the press release.

However, the issue of “urban sprawl” was already dealt with in a study by the Southeastern Wisconsin Regional Planning Commission (SEWRPC) in 2010. It stated, “…it is unlikely that the recommendation for the selected communities to change water sources, from groundwater to Lake Michigan, would yield any significant socio-economic imbalances through 2035.” The Waukesha Water Utility also points out that only 15% of the land in the water service area is available for new development.

The statement by the groups also makes some interesting claims, such as Waukesha must be hostile to minorities because conservative voters didn’t like the idea of light rail. That’s racism because a Nazi in Milwaukee once campaigned for mayor on the crime issue and suburbanites are (understandably) afraid of Milwaukee crime spilling into their neighborhoods. So a Nazi in Milwaukee running for public office is evidence of racism in Waukesha. Sounds like minorities would be more welcome in Waukesha.

And minorities are seeing Waukesha as a more attractive place to live. The Waukesha Water utility has the statistics and, unlike the liberal groups from Milwaukee, does not try to confuse the issue by including population from the rest of Waukesha County. Between 2000 and 2012, the non-white population of the city of Waukesha has grown from 9% of the population to 12%. In the last decade, minority population growth accounted for 80% of the city’s total growth.

Instead of worrying about the housing policies of Waukesha and whether they’re hospitable to minorities (clearly they are) the Milwaukee-based liberal organizations should instead focus on making Milwaukee a more attractive place for people to live and businesses to locate. The schools are failing, crime is soaring and taxes are going up to build stadiums and streetcars. If these trends continue, we can expect to see more minorities moving to Waukesha for safer neighborhoods and economic opportunities. Good thing Waukesha is getting a safe and sustainable supply of water to provide its new residents.

But because of zero-sum regional economic thinking like that found in the groups’ statement, the city of Milwaukee removed itself as a potential water supplier to Waukesha. City residents will continue to pay higher rates because of their water utilities’ excess capacity while Waukesha (and possibly other communities in the future) buy water from Oak Creek. This short-sightedness will hurt Milwaukee’s minority communities hardest because utilities take a higher percentage of household income.