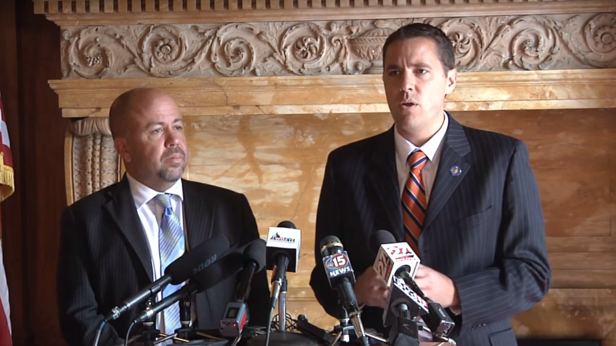 Dept. of Children and Families Employee Reinstated after Joking about Shooting a Client with Pepper Spray

[Madison, Wisc…] Newly proposed legislation aims to stop the abuse of the civil service code that allowed a public employee to be reinstated after joking about shooting a client with pepper spray.

Sen. Roger Roth (R-Appleton) and Rep. Jim Steineke (R-Kaukauna) unveiled their plan last Thursday to overhaul Wisconsin’s civil service rules. While their main goal is to make it easier to recruit and retain high-quality public employees, the two Republicans also want to ensure the system is not being abused by a select few.

Gov. Scott Walker, fresh off his presidential campaign, quickly threw his support behind the legislation.

“This legislation will implement common-sense reforms to our recruiting process to get the best in the door and will give state agencies the tools to retain their great employees, as well as to address the bad actors who abuse the system,” Walker said after the plan was announced.

One such “bad actor” that abused the system was an employee at the Department of Children and Families (DCF). After multiple complaints and issues, the employee was suspended in 2014 for 30 days.

According to a Wisconsin Employment Relations Commission decision, the employee had an inappropriate conversation with coworkers about the pepper spray he carried with him.

“Who should I shoot?” he said referencing the clients he was handling at the time. Two of his coworkers expressed concern, which was the catalyst for the disciplinary action.

The employee faced a 30-day suspension, was required to take a “fit for duty” test with a psychiatrist and was not allowed to carry a concealed weapon while on duty, even though he obtained a concealed carry permit. Under the civil service code, however, the employee was able to appeal and the penalties were overturned.

According to records of the appeal, “the 30-day suspension imposed on [the employee] is rejected and the DCF shall make [him] whole in all respects, including, but not limited to, removal of the discipline from his file, including the fitness for duty evaluation.”

This is just one example of a state government agency being unable to fire or take other disciplinary action against a problem employee.

In another case, an employee stole from the Department of Revenue and fled the state to Canada. However, the employee could not be fired until he had abandoned his job for more than five consecutive days.

Two Department of Corrections employees were caught using illegal drugs with offenders under state supervision. While the employees were initially fired, they were given their jobs back because of civil service protections. It was only after a lengthy and expensive legal battle that the two drug-using state employees were definitively terminated.

The governor, Sen. Roth and Rep. Steineke hope these types of stories become a thing of the past with the passage of their reforms.

The MacIver Institute will continue to provide updates on the civil service reforms. Check back often for the latest information.