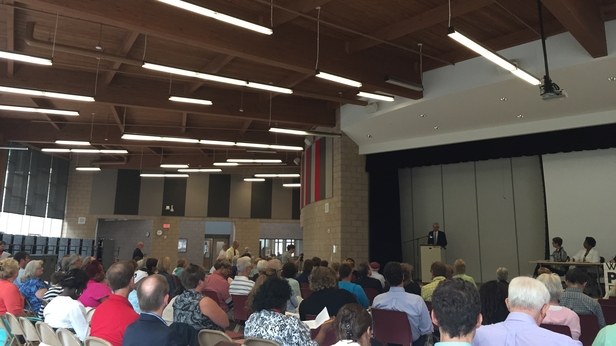 The MacIver Institute attended six of these panels as well as the opening plenary session.

Hosted by the Wisconsin Public Education Network, a non-profit organization, the panels were generally focused on educating participants on how to work to improve public education in our state through activism, lobbying, and supporting parents and students.

Gov. Scott Walker’s actions on education, especially Act 10 and the state’s school choice program, served as the overarching and unifying theme throughout the day. At times, conversation moved from simple concern to more disturbing rhetoric.

During one session titled “How to Organize Parents and Make an Impact in Your School,” one of the speakers, Dennis McBride of Support our Schools-Wauwatosa, joked about shooting down legislators.

“One thing that we’ve done is we’ve made sure every time one of our legislators pops up his or her head above the foxhole, we’re there to shoot at them,” McBride said.

Audience members chuckled. One woman interrupted McBride, remarking “nobody in here is like recording that where that’s going to end up on somebody’s campaign trail.”

“I’m not a member of the National Rifle Association,” McBride added. “I’m speaking metaphorically. But the point is that we have to be there when they’re there.”

It wasn’t the only instance during the day when panel speakers made outlandish remarks.

During a session titled “Keeping Public Schools Public: Understanding the ‘Privatization’ Agenda,” speaker Jonas Persson of the Center for Media and Democracy tied the voucher movement to white supremacists.

“Some of the first voucher supporters outside of this kind of new right core group of ideologues and wealthy entrepreneurs were white supremacists who pointed out, quote, ‘the racial nature of [voucher programs]’,” Persson said. “The voucher movement drew most of its support from, quote, ‘white flight areas’. ”

Persson also spent a great deal of time glossing over the success that voucher programs have had with minority populations.

Persson went on to describe that the voucher programs are merely a ploy for companies to gain major profits and eliminate the public school system.

“Vouchers were never about helping the poor, at risk, or minorities…[it was] a useful fiction for ALEC,” Persson said. “A fiction of how right-wing ideologues and corporate backers gained, politically, bipartisan support, an ideological scheme designed to privatize public schools.”

Profits in education were consistently mentioned throughout the day, as panel members expressed their strong opposition to school choice programs.

“The ultimate goal [of vouchers] isn’t about getting the best education for our children,” Jennifer Epps-Addison of Wisconsin Jobs Now/Schools and Communities United said. “The ultimate goal is about breaking down public schools and to be honest with you, it’s about profiting off of the education of our kids.”

Evidence showing the success of voucher programs was brushed aside, and in many cases actually called into doubt entirely.

“We have the nation’s first voucher system which has now been tested as an experiment for 25 years, yielding no better results academically than the public schools,” Ruth Conniff, chair and editor of The Progressive Magazine, said in a panel titled “Celebrating the Public: Myth-Busting, Values-Based Messaging, and Getting It Right.”

Conniff and others at the conference ignored reliable and widely cited data from the state-contracted School Choice Demonstration Project (SCDP), which was conducted by officials at the University of Arkansas and the University of Wisconsin.

In the fifth and final year of the study, students taking advantage of the Milwaukee choice program showed statistically significant growth over their peers at traditional Milwaukee Public Schools.

The SCDP also found that choice students were more likely to graduate from high school, attend a four-year college and stay enrolled in college.

However, other speakers, including John Forester of the School Administrators’ Alliance, echoed anti-voucher comments, sidelining evidence of the success of school choice programs by claiming that they’re all about politics and profit.

“This past year, our membership has been really disappointed by, increasingly, education policies that develop based upon ideology. Based on political expediency here in the State of Wisconsin,” Forester said. “And that’s not based on the evidence of what we know and what will actually move the needle for our kids.”

Panel speakers and audience members spent a great deal of time discussing profit in a largely negative light, especially as it relates to the education system and healthcare.

In an example meant to highlight the inefficiency of the private sector, Conniff discussed the American healthcare system.

“How’s private bureaucracy working for you in the private American healthcare system?” Conniff asked. “With its bloated bureaucracy, its huge overhead, and its homicidal mission to deny services to people?”

Conniff’s speech was followed by Julie Wells, who she described as “famous, famous, famous in Wisconsin for her leadership in the recall effort.”

Wells, a factory worker from Fort Atkinson, submitted the paperwork to the Government Accountability Board to formally begin the recall effort in 2011. She is now the Co-Chair of the Forward Institute’s Board of Directors.

When panel speakers weren’t focusing on the negative aspects of Walker’s agenda, they discussed strategies on how to defeat it. Wells spent her time discussing how the progressive left should reframe the debate by not using terms they deem conservative.

According to Wells, framing is the context surrounding a set of words. Certain words activate frames, thereby making those frames stronger.

That’s why, according to Wells, progressives should add two words in particular to their list of ones to avoid: Scott Walker.

“Every time you say Scott Walker, you’re actually reinforcing the awareness of Scott Walker. And you’re giving him name recognition,” Wells asserted. “So perhaps just when you talk about him, say ‘the governor’.”

Other ideas to move progressive ideas forward were prevalent during the panel titled “We Know What Works: How to Advocate toward Schools that Work for All Students,” during which Epps-Addison spent a great deal of time discussing the Wisconsin Free Compact.

Their plan strives to guarantee “all work has dignity, all labor has value, and all working families are securely in the middle class.”

One of the main objectives of the Wisconsin Freedom Compact is to dramatically increase public education funding by “$6 billion over 2015 levels.”

The problem for Epps-Addison here is that she is utterly wrong. Major business tax credits in fiscal year 2014 – the most recent data available from the Department of Reveune – equaled about $156 million, or about 2.6 percent of $6 billion.

Even if the annual budget for the Wisconsin Economic Development Corporation is added in, the total only increases to about $190 million in “subsidies for big corporations.” If anything, the amount given in tax cuts to job creators in the state is a drop in the bucket compared to the funding increase they are calling for.

Epps-Addison asked attendees to look outside of the box when it comes to finding this money in the budget for her plan. Decriminalizing marijuana, she explained, would give the state $167 million in funding, not counting additional reported income taxes from those in the trade.

But her suggestions for new funding are still far short of what would be needed.

For even more perspective on how much of an increase Wisconsin Jobs Now is looking for, the 2015-17 state budget calls for about $6 billion in funding for K-12 education a year. The University of Wisconsin System gets another $6 billion a year.

In addition to astronomical increases in government spending, the plan would give the state the ability to raise the minimum wage to $15 an hour. While her group has tirelessly advocated for such a policy, Epps-Addision made no mention of the 91,000 people who would lose their jobs should the minimum wage more than double.

The MacIver Institute will provide more updates on the Wisconsin Public Education Summit in the coming days. Check back often for new information as we make it available.

**Editor’s Note: A previous version of this article contained the term “white flight Aryans” in Jonas Persson’s quote. After review of notes and audio recordings, the phrase has been corrected to read “white flight areas.” The context and overall significance of Persson’s statements are not changed, but the quote is updated for accuracy.