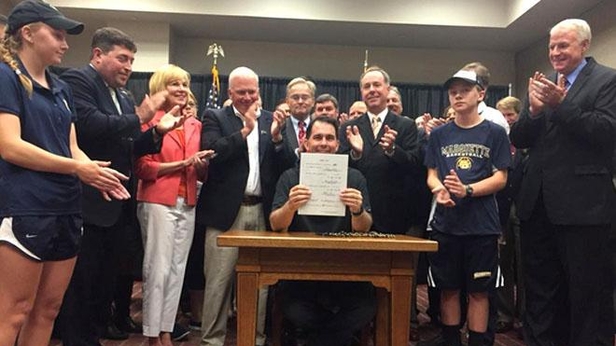 [Milwaukee, Wisc…] Gov. Scott Walker signed a bill on Wednesday committing millions of dollars in taxpayer funding to build a new arena for the Milwaukee Bucks.

Surrounded by state legislators from both sides of the aisle, team officials and others, the governor briefly spoke to media about the deal, calling it a “dynamic attraction for the entire state of Wisconsin.”

Walker and other supporters of the plan have argued for months that building a new arena would revitalize parts of Milwaukee and would keep the team from leaving the state.

Bucks President Peter Feigin stood beside the governor as he signed the bill into law and released a statement in support.

“Today’s signing is the culmination of an extraordinary effort from a broad coalition to not only keep the Bucks in Wisconsin, but revitalize Milwaukee,” Feigin said.

The legislation requires $250 million in initial support from taxpayers. Including interest, however, the sum is estimated to go up to at least $400 million over the next 20 years. Both the state and Milwaukee County will need to provide $4 million on an annual basis to the Wisconsin Center District, which will contribute an additional $93 million towards the new arena.

The City of Milwaukee will also contribute $47 million in the form of a parking structure and a tax incremental financing district.

As the MacIver Institute previously reported, the bill passed both branches of the legislature without a great deal of debate, despite early concerns that there was too much opposition to the bill for it to reach the floor. Milwaukee-area legislators were largely in support of its passage, with Sen. Lena Taylor (D-Milwaukee) calling it a “great day for Milwaukee and the whole state.”

Despite broad support from his colleagues, one Milwaukee-area senator voted in opposition to the bill.

“The burden of paying for the construction of the new arena should fall on those who would benefit from its construction,” said Sen. Tim Carpenter (D-Milwaukee). “The bill failed to live up to this basic requirement and in the end I could not support it.”

Sen. Steve Nass (R-Whitewater) also raised concerns over new funding for the arena that was not included in the original text: the State Building Commission is slated to authorize up to $10 million in tax dollars for maintenance and repair of the Bradley Center. This includes at least $2 million directly related to the construction of the new arena, with the other $8 million being used for maintenance and repairs on the current center, which will be demolished in three years.

“There are legitimate questions on why we would spend all of the $8 million on a building destined to be torn down in three years,” Nass said in a statement. “Worse yet, is the fact that bureaucrats could decide to use more of this taxpayer money for hidden costs of the new arena development.”

The proposal now heads to the Milwaukee Common Council for approval. Once it passes that final hurdle, construction on the new arena could begin as early as October or November.