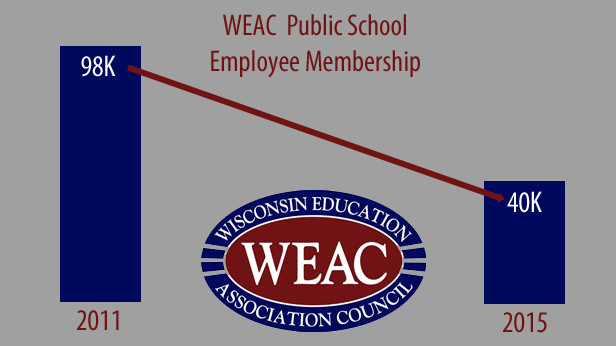 [Madison, Wisc…] Four years after the passage of Act 10, the state’s largest teachers’ union has seen membership drop by more than half to less than 40,000 public school employees.

The 2011 collective bargaining reforms championed by Gov. Scott Walker finally gave Wisconsin public employees – including teachers – the freedom to choose whether or not they wanted to join the union and pay dues. Based on the data, thousands of teachers made the decision that the union’s services were not worthy of the costly monthly dues.

Prior to the passage of Act 10, the Wisconsin Education Association Council (WEAC) had approximately 100,000 members.

This news of the dramatic drop in membership was first reported by the Wisconsin State Journal in February, but was brought to light again on Monday by public education blogger Mike Antonucci – whose work has been featured multiple times by major news outlets – along with some staggering figures for the National Education Association (NEA).

According to Antonucci, director of the website eiaonline.com, the “downward spiral” led WEAC to cut its dues by $60 to $218.

On the national level, the NEA has also seen a drop in membership. From 2009 to 2014, according to Antonucci, the NEA lost more than 310,000 members – a drop of nearly 11 percent. Wisconsin led the way with the largest five-year drop of nearly 53.1 percent.

It isn’t just individual members that are leaving their unions, though. The MacIver Institute reported in December that an increasing number of teachers’ unions were being decertified by their members all together.

Under Walker’s reforms, public unions must hold annual recertification elections to ensure they still have the support of their members. More than 100 public school unions in Wisconsin have voted to decertify in the past two years.

While Act 10 continues to save taxpayers money everyday – a total that has eclipsed $3 billion – it also has grants thousands of public employees workplace freedom. According to the data, it looks like teachers and other public school employees are actively taking advantage of that freedom.