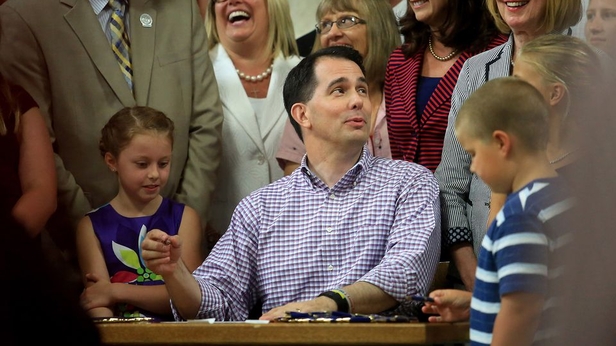 “These vetoes will reduce overall spending, constrain earmarks, allow the executive branch to efficiently perform its statutory duties, and correct legislative errata,” Walker said in his veto message. “These vetoes increase the general fund balance by $44,495,400 GPR over the biennium.”

Walker axed the independent audit of the UW System, stating that the Legislative Audit Bureau (LAB) should continue its auditing authority since the System will still be a state agency. The legislature rejected Walker’s original proposal to “spin-off” the UW into its own public authority.

The LAB will also no longer need to contract a study of the special needs voucher program, which will begin next year.

Two controversial provisions were deleted from the Joint Committee on Finance’s (JFC) infamous 999 motion. The first would have granted special privileges to chiropractors in disputes with health insurers, and the second would have opened up business for payday lenders in Wisconsin. Walker’s veto message described the chiropractor provision as too “unique” to be allowed and the payday lender authority expansion as “overly broad.”

“Changes of this magnitude should be addressed as separate legislation where the implications can be more carefully explored,” Walker remarked.

The legislature’s plan to expand the UW’s budgetary authority took a hit as Walker brought the Department of Administration back into the procurement process at the System. The legislature would have ceded all procurement authority at UW to the Board of Regents.

The governor also deleted pork grants to regional economic development entities worth $750,000, which JFC added during their budget deliberations. A $500,000 grant to create a Frank Lloyd Heritage Trail was deleted to stop the special treatment of this pork project. Walker also reduced by $1 million the amount of money that the state gives to non-profit conservation organizations. Even with Walker’s deletions, the budget contains nearly $33 million in pork grants and projects.

Walker got rid of a requirement for state agencies to submit a budget request scenario that assumes zero growth. This item would have been a healthy fiscal restraint exercise for state departments. Budget request season, which happens in the fall of every even numbered year, has become notorious for producing “wish-lists” with unrealistic spending initiatives. The governor explained that he has the power to tell agencies what assumptions to base their requests on, and that it does not need to be a lawful requirement.

A few modifications were also made to the Family Care and IRIS plan passed by the legislature. Walker does not want a fixed number on the amount of long-term care regions that can exist in Wisconsin, which the legislature set at no less than five. Walker thinks the Department of Health Services should have flexibility in determining the number of regions. The governor’s original proposal expanded the program statewide with no regions, but the legislature changed that plan to allow for a regional model with multiple managed care organizations in each region.

MacIver will release a full budget analysis this week that walks taxpayers through the good and bad of the two-year budget, as well as missed opportunities to help taxpayers.