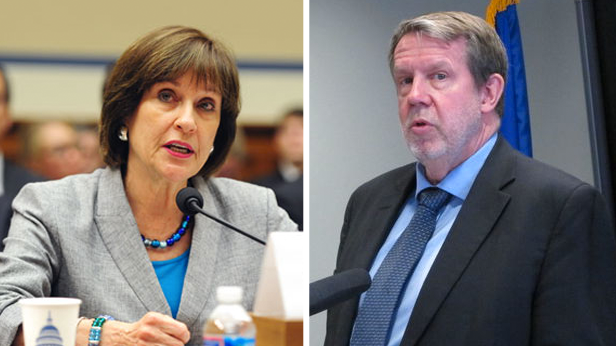 [Madison, Wisc…] The day after Wisconsin Democrats failed to win back the Senate in the first round of recall elections, Internal Revenue Service (IRS) Director of Exempt Organizations Lois Lerner wanted to know what was going on in the state.

To find out, she emailed her friend, Kevin Kennedy, at the Wisconsin Government Accountability Board (GAB), which oversees the state’s elections.

“Heard a quick blurb on the radio, but don’t know the whos and whys–care to enlighten me on the stuff going on out there?!” Lerner wrote in an August 10, 2011 email to Kennedy, GAB Executive Director, with the subject line, “Wisconsin Recalls.”

Congress is currently investigating Lerner, now a former director at the IRS, who is suspected of using the agency to target conservative non-profit groups. On May 22, 2013, she pleaded the fifth during a congressional hearing, and then claimed her emails had all been lost due to a crashed server.

The Treasury Department’s Inspector General was able to recover more than 1,000 of 24,000 lost, and turned them over to Congress this summer.

Kennedy faces similar accusations in Wisconsin over the GAB’s involvement in the John Doe investigation into Gov. Scott Walker and conservative groups.

“We have completely lost confidence that the GAB can be trusted to operate in a non-partisan manner for the citizens of the state of Wisconsin with Kennedy in charge,” said Sen. Alberta Darling (R-River Hills) and Rep. John Nygren (R-Marinette) in a joint statement earlier this month. “In order for the GAB to return to its original mission, Kevin Kennedy must go.”

The Wall Street Journal was the first to report the professional and friendly relationship between Kennedy and Lerner.

In response to WSJ’s revelation about the relationship, Wisconsin Rep. David Craig (R-Big Bend) filed an open records request with Kennedy for all communication records between Kennedy and Lerner going back to 2010.

Kennedy, in a letter accompanying the documents turned over by the GAB, attempted to explain his communications with Lerner and the IRS.

“We did not share information with the IRS specific to the GAB’s investigation. The IRS certainly has a role in regulating nonprofit organizations which engage in political speech, giving the Board good reason to consult with the IRS regarding general issues of campaign finance regulation in the same way that we consult with the Federal Election Commission,” Kennedy wrote.

The documents were released Monday after Craig’s request.

“It is disturbing that the GAB hid behind the law when shielding John Doe investigation documents from legislators and the Legislative Audit Bureau, all the while sharing information with an unrelated federal agency that has nothing to do with the administration of elections,” Craig said in his statement containing the original request.

“Even more disturbing, is the fact that the very IRS officials in communication with the GAB were the same IRS officials at the heart of a scandal targeting conservative political groups.”

“I am glad to respond to your public records request and also to your questions, but I vehemently disagree with the accusations in your public statement of July 10, 2015, regarding G.A.B. contacts with the Internal Revenue Service and how our agency conducts its business,” Kennedy wrote in his response.

The records begin with an email on February 5, 2010 and consist of nearly 150 pages. Most of the emails show a comfortable relationship between Kennedy and Lerner including forwards of cutesy pictures and emails planning dinners together.

However, there are some discussions that relate to issues in the IRS scandal and the Wisconsin John Doe Investigation.

The emails show Lerner and Kennedy communicated both directly and indirectly about the role of 501(c)(4)s in elections and how campaign finance laws are applied.

One such email included an October 2010 Washington Post editorial opposing the “flood of secret money” in the 2010 election, claiming something needed to be done before 2012 to stop it.

Lerner forwarded the editorial to Kennedy on October 12, 2010 with the message, “Plain and simple.”

“The real problem lies in a tax code that permits too much political activity to take place in secrecy,” the editorial read.

It continued, “Second, and this is the link to secret campaign cash, it allows established or newly sprouted interest groups to take unlimited amounts of corporate or other money to use it for independent expenditures – without revealing the underlying givers.”

As a reminder, this type of activity was central to the prosecutors’ argument in the John Doe investigation.

“The investigation focuses on a wide-ranging scheme to coordinate activities of several organizations with various candidate committees to thwart attempts to recall Wisconsin Senate and Gubernatorial candidates,” Prosecutor Francis Schmitz wrote in court documents. “That coordination included a nationwide effort to raise undisclosed funds for an organization which then funded the activities of other organizations supporting or opposing candidates subject to recall.”

While prosecutors and the main stream media highlighted these claims, no charges were ever filed and the investigation was ended by the state Supreme Court for being illegal.

“To be clear, this conclusion ends the John Doe investigation because the special prosecutor’s legal theory is unsupported in either reason or law,” Justice Michael Gableman wrote in the Court’s ruling.

Lerner also tried to help Kennedy on an issue relating to “political intervention.”

“Does anyone know the number of the c4 rev.rule we did a few years back on what is political intervention? A friend of mine who works for a state government say his legislature is trying to tighten up on political spending and wants c4s that put out communications within 60 days of an election to report them,” Lerner wrote in an email to several individuals.

“The c4s are arguing that because the state is characterizing them as ‘political’ they will get in trouble with the IRS even though they don’t think it is ‘political.’ I explained that what we are talking about is campaign intervention rather than political activity.”

Once she had a response, she forwarded the information to Kennedy at the GAB.

Kennedy was helpful to Lerner, as well. He produced a PowerPoint presentation on the difference between 501(c)(4)s and 527 committees that Lerner used at a Council on Governmental Ethics Laws conference.

In fact, Kennedy organized a panel at the COGEL conference in 2009 about how political speech is regulated using tax law instead of campaign finance law. Lerner was on that panel, as were FEC officials, Madison attorney Mike Wittenwyler, a DC attorney, and Paul Ryan from the Campaign Finance Institute (not the Wisconsin Congressman).

In response to the release of the emails, Craig continued to be suspicious of the GAB.

“The years long entanglement between Lois Lerner, the former Obama Administration official at the center of the IRS’s scandalous targeting of conservative groups and Director Kevin Kennedy of the Government Accountability Board raise serious questions about the role of the federal government in Wisconsin elections over the past five years and the John Doe investigation recently halted by the Wisconsin Supreme Court,” Craig told the MacIver Institute in an email.

“Unfortunately we are unable to obtain further documents from GAB officials that would bring complete clarity to this matter and to the John Doe investigation,” Craig continued. “The people of Wisconsin deserve to know the full level of involvement by Ms. Lerner and the Obama Administration in Wisconsin’s elections and the John Doe investigation.”

Craig plans to introduce legislation that would allow other documents to be released by the GAB, and other reforms have been suggested. The governor went as far to say that the GAB should be abolished and replaced with an entirely new agency.

All the emails between Lerner and Kennedy are available here and here.