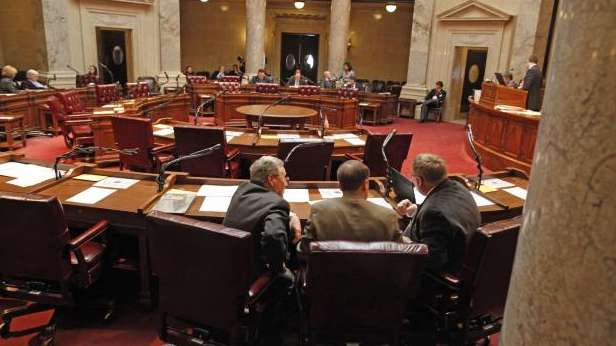 [Madison, Wisc…] The State Senate passed the 2015-2017 state budget late Tuesday night on an 18-15 vote. All Senate Republicans except Rob Cowles of Green Bay voted in favor of the $73.4 billion dollar (all funds) two-year budget. All Senate Democrats voted against passage. The budget bill, Senate Bill 21, now heads to the Assembly where it is to be debated for almost 12 hours on Wednesday before a final vote is expected before midnight.

Democrats offered over 40 stand alone amendments on the floor. Their amendments proposed changes to K-12 education funding, the long term care program, Medicaid, Wisconsin’s School Choice program, the UW System and just about every other major change adopted by the Joint Committee on Finance. One amendment, offered by Sen. Bob Wirch (D – Kenosha), would have put the Governor’s Mansion up for sale.

Time and time again, Senate Democrats accused Republicans of carrying water for Gov. Scott Walker’s presumed run for President. Senate Minority Leader Jennifer Schilling (D – La Crosse) claimed “Republicans carefully crafted this budget to benefit one person who just so happens to be running for president” and asked that, instead, the two sides “work together to lift up all families and move our state forward.”

The prevailing wage reform plan, introduced as Senate Amendment 2 to Senate Substitute Amendment 1, was adopted on a 17-16 vote and exempts all local governments and gets rid of the state’s role in determining prevailing wage rates. Republicans Howard Marklein (R – Spring Green) and Rick Gudex (R – Fond du Lac) joined the 14 Democrats in voting no to the amendment.

The plan, originally offered by Sen. Frank Lasee (R-De Pere), would maintain prevailing wage requirements for state projects but wage rates would be taken from the federal Davis-Bacon law, which determines rates for employees working on federal projects. This would eliminate the complicated and inaccurate survey method of determining Wisconsin’s prevailing wage rates done by the Department of Workforce Development.

Current cost thresholds that qualify a state project for prevailing wage would remain the same. Those are $48,000 for a single-trade project and $100,000 for a multi-trade project.

The amendment also borrows a few provisions from Assembly Speaker Robin Vos’ prevailing wage plan. It will make it harder for third parties to investigate whether the state is following through on prevailing wage determinations for employees on public projects. Only an employee may make such an investigation, and if a third party does want to inquire, they have to provide a written statement that they do not work for the state. This addresses a concern first brought to light by Media Trackers where third party interest groups were harassing contractors and governments into providing compliance information.

The amendment also exempts subcontracting truckers who bring in or drop off excavated material or mineral aggregate to a prevailing wage job site. These trucking employees would not qualify for prevailing wages.

The Senate amendment did not only deal with prevailing wage, however, as members used the amendment to clean up other details in the budget document.

The UW System will be able to utilize an accounting maneuver to better handle the $250 million cut they are receiving. The maneuver will backload $25 million of the cut to the second year of the budget (2016-17) so that System has a little more wiggle room in the first year. The change does not decrease the size of the cut.

Another provision exempts the Technical College System Board from a shared services initiative to be started by the DOA next year. DOA will be looking for ways to share administrative duties to streamline certain functions for the Government Accountability Board, the Department of Financial Institutions, the State Treasurer and other small agencies within state government. Wisconsin’s Tech Colleges will now not be included in this initiative.

A curious addition found in Senate Amendment 2 involves seemingly special treatment for the Town of Maine and Village of Brokaw. These two municipalities will be able to adopt a resolution and pass a referendum to become a village under the now amended budget, something apparently not within their current power.

Another debatable provision that was included in last week’s Joint Committee on Finance (JFC) budget has now been adjusted. The provision would have forced counties and municipalities to offer a more expensive High Deductible Health Plan (HDHP) to their police, fire, and EMTs. Now, only Milwaukee is required to offer these HDHPs, which will have to mirror the HDHP’s that are offered to state employees. The problem here is that many local governments already offer more affordable HDHPs to their employees, and being forced to offer the state’s more expensive version would drive up costs. The Senate amendment will only force Milwaukee to adopt such health plans.

Unfortunately, the Senate amendment also deleted a JFC provision that would have ended the unnecessary Local Government Property Insurance Fund (LGPIF). The LGPIF is a state-run insurance program, founded in 1903, to cover the property of local government’s in Wisconsin. It has recently turned a deficit that will need to be covered by taxpayers. Just last week, the Onalaska School District dropped their LGPIF insurance and saved $27,000 on their premiums by switching to a private insurer, proving that the private market isn’t as scary as some claim. Yet, the Senate saved this relic of a bygone era.

The last change worth highlighting is the extension of utility relocation reimbursements to the Milwaukee Metropolitan Sewerage District (MMSD). Currently, local utility districts get a 90 percent reimbursement on any utility facilities that have to be moved to make way for a state freeway project. MMSD will simply be included as a district that gets these reimbursements.