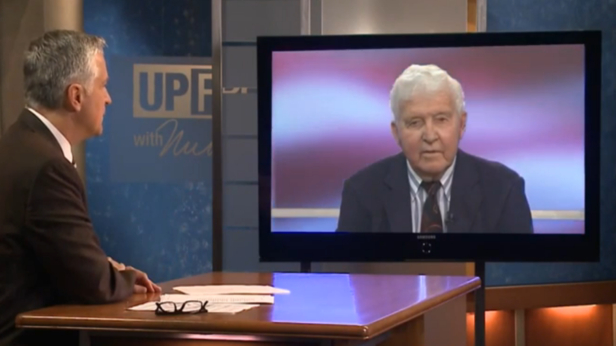 Retired Judge Gerald Nichol, the chairman of the Government Accountability Board, has an interesting definition of accountability. On UpFront with Mike Gousha, the first question to Nichol was about the board’s unaccountable structure. He disagreed by pointing out that the board is made up of appointed, retired judges.

“I think the GAB is very responsible to the people and the public of Wisconsin. And you have six retired reserve judges who are non-partisan, can’t be involved in politics, who have the oversight of the agency and meet on a regular basis to review the agency and all of its obligations to the people of this state.”

Gousha, who rarely asks a follow up question, didn’t ask how that structure makes the board accountable. Nor did Gousha have any critic of the GAB, or even a victim of the recently closed John Doe probe, on hand to ask the judge how a board completely insulated from the public is accountable to them.

The insularity of the GAB is a feature, not a bug. The theory is keeping the GAB free from partisan pressure allows the agency overseen by the Board to work without having a political bias. Instead what we have seen is a board and agency staff with built-in political biases with no checks on their ambitions. They have been free to pursue an ideological agenda, even as they have been discovered to be neglecting the basic work of the agency, without any accountability.

Not only is there no check on the GAB’s authority, thanks to the state legislature, but even the mainstream media are accomplices to the GAB’s attempt to shut down conservative speech rather than watchdogs checking the abuses of government power. We saw it again Sunday when Gousha had Nichol on his program unchallenged by anyone critical of the GAB. Nonetheless, despite the free and easy forum given to Nichol to defend the GAB, his own words should give the public pause on trusting him and his fellow judges to oversee the state’s election laws.

When Nichol was asked if he had any regrets about the GAB’s involvement in the John Doe investigation, he told Gousha, “No I don’t. You know one of the fears you have when you’ve been here, and I’ve been on the GAB from the beginning, so I’ve been there eight years, is money in politics. And when you have these outside groups with scads of money looking to spend it on candidates and on issues, it should be transparent and, uh, people should be accountable and the public should have full knowledge of what’s going on.”

Too bad Nichol doesn’t have a similar bent towards transparency and accountability in his own agency where it belongs. But Nichol’s complaint about money in politics is not the concern of the GAB, it’s a personal crusade. And when he also complains about “outside groups with scads of money” spending on issues, he goes beyond the limits of election law since Buckley v. Valeo has recognized a definition between express advocacy of candidates and issue advocacy.

This ideological fixation on money – conservative money – in politics apparently caused Nichol to be uncaring about the rest of the GAB’s functional failures. He told Gousha, “Until the John Doe came up, other than a hiccup there with the recall, where we have not had any feedback as to a lack of performance by the GAB and meeting its obligations.”

It was only then, in the very last question of the interview, that Gousha brought up the audit by the Legislative Audit Bureau that detailed many failures of the GAB to perform its statutory duties. Nichol said he welcomed an audit, and claimed the failures pointed out in the last audit were now fixed.

It’s an amazing cocoon-like existence for Nichol, left undisturbed by Gousha, leaving him able to ignore the numerous other concerns about decisions by the GAB, often with partisan results: the failure to check the recall petitions, the scheduling of the state senate recalls on different days, the failure to investigate the irregularities surrounding the recall election in Racine, the GAB’s opposition to voter ID laws, the rule forcing election observers to stand six feet away from voter registration tables, and the communications with the IRS regarding the tax exempt status of conservative organizations.

At least Nichol cannot claim that he was uninformed of the GAB’s activities. In defending Kevin Kennedy, the GAB Executive Director, Nichol claimed that he spoke to Kennedy every day, more often than he speaks with his wife. “In the eight years I have been on the board I have always been aware of what is going on.”

Our condolences then to Nichol’s wife who should be granted much more time with her husband in the future as it is clear that he is ill-suited for his current position. For we should no more trust her husband or his colleagues with protecting election integrity while having proper respect for the First Amendment than we would trust a shaky-handed mohel with a newborn. It’s time for the legislature to consider the “accountability” in the Government Accountability Board and create a more accountable body to administer the state’s elections.