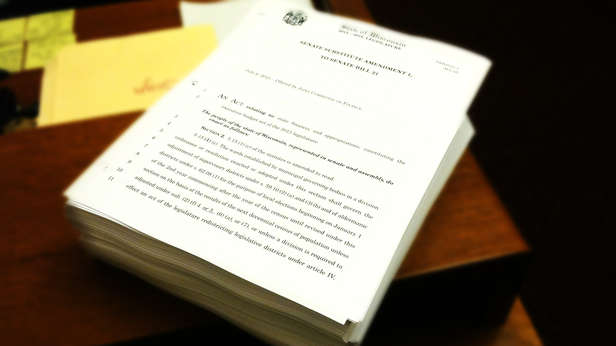 [Madison, Wisc…] With Governor Walker poised to issue vetoes and sign the state budget this weekend, questions abound as to what will make it into the final version.

After the legislature delivers the final budget bill to him, the governor can make significant alterations using his line item veto. And so in the time between he gets the bill and signs it, one last unofficial phase of the budget process takes place.

Some Capitol insiders have predicted the governor could veto as much as 75 percent of the controversial 999 motion.

Republicans, Democrats, and interest groups are launching one last effort to influence the budget through a series of special requests. How much this influences his final decisions is questionable, but everyone seems to get involved.

Even newspapers are trying to influence his decision. The Milwaukee Journal Sentinel printed an editorial on Thursday, “Governor should use his veto pen on state budget,” calling for Walker to remove changes to teacher licensure, online court records, and increased authority to the Milwaukee County Executive.

Continued Ohnstad, “Any honest financial advice would have to include not taking out payday loans in the first place. Wisconsin doesn’t need and doesn’t want this predatory industry to expand in this way. I hope Gov. Walker listens to the people and the businesses of Wisconsin and vetoes this troubling provision,” Ohnstad wrote.

Rep. Dave Considine (D-Baraboo) is worried about what one of the non-fiscal items in the budget would mean for wineries in his district.

“They represent a rapidly growing industry in our state, and allowing them to hold a Class B liquor license would help them expand their businesses even further by hosting events like weddings and banquets. Prohibiting them from holding this type of license, as would be the case under this budget provision, would only hinder their growth and hurt our local economy,” Considine wrote.

While Democrats issued public statements about what they would like to see deleted from the budget, Republicans seemed to be more discreet. No Republicans appear to have publicly posted their requests.

Interest groups also issued their wish lists prior to the weekend. Some required delicate maneuvering as they argued for some items to remain in, while others should be removed.

The Survival Coalition of Wisconsin Disability Organizations asked “that expansion of Family Care/IRIS to the remaining eight counties occur as proposed, but requests that all other changes related to long term care included in the budget (pages 1497-1503) be removed and considered as a separate piece of legislation.”

Some requests got very specific.

While some groups approach the governor with a degree of humility and respect, others choose a different approach.

“My hope is that Governor Walker will use plenty of ink on this dumpster-fire of a budget, before he takes his final action,” wrote Rep. Andy Jorgensen (D-Milton).