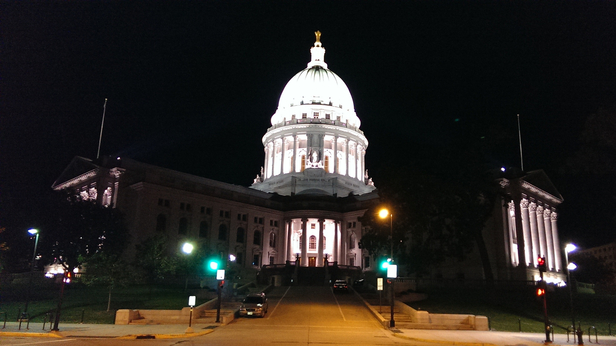 Despite the light of the full moon, darkness descended upon Wisconsin’s government. On Thursday night the Republicans on the Joint Finance Committee voted to gut Wisconsin’s open records law. In one swift motion, allowing no vote on the infamous individual provision of a much larger “999” budget amendment, Republicans attempted to strike a terrible blow against open government. By Saturday, a bipartisan clamor in defense of the open records law forced the Republicans to promise that no changes would be made.

When asked who wanted the change in the law, legislative Republicans imitated a Family Circus cartoon. The spirit of “Not Me” had somehow snuck into the Joint Finance Committee meeting room and scribbled the offending passages on the budget motion.

Under the proposed change in the law, state and local public officials would be exempt from providing open records if they are “deliberative” in nature. “Deliberative materials” are “opinions, analyses, briefings, background information, recommendations, suggestions, drafts, correspondence about drafts, and notes, created or prepared in the process of reaching a decision concerning a policy or course of action or in the process of drafting a document or formulating an official communication.”

The motion would have stopped the Legislative Reference Bureau (LRB) from keeping drafting files and records for proposed legislation. The LRB would have had to keep any communications with legislators confidential.

Worse, the proposed change would have kept the identities of anyone communicating with the legislature confidential and even ex-legislative staff would be bound by a gag order preventing the release of information.

The language of the changes seemed to point to the administration of Governor Scott Walker. Walker is currently being sued for records concerning the decision to change the University of Wisconsin’s mission statement, the so-called “Wisconsin Idea.” The Walker Administration is denying the release of the records claiming a “deliberative process privilege.” However, the Administration is not saying what part it played in the process.

There were some half-hearted defenses. State Assembly Majority Leader Jim Steineke told the Milwaukee Journal Sentinel, “Having everything scrutinized can lead to a chilling effect of people being willing to get their work product done.” Yes, the public might learn who asked for what special favor to be slipped into the budget, such as the sales tax break for deer supplied to game farms. If there is enough public scrutiny, perhaps lobbyists against repeal of the prevailing wage law won’t be given the special privilege of addressing a closed caucus of Assembly Republicans. We can imagine that would make life difficult for Steineke and Assembly Speaker Robin Vos.

When confronted with the backlash against the changes, Vos told the media that changes could be considered when his caucus met on Tuesday. Walker said on Friday that he would work with legislative leaders to modify the changes in the open records law. The promises were insufficient. Bipartisan calls to keep the open records law “as is” threatened to drown out the meager accomplishments of the budget process so far.

On Saturday, America’s Independence Day, Republicans retreated in a statement from the governor’s office,

After substantive discussion over the last day, we have agreed that the provisions relating to any changes in the state’s open records law will be removed from the budget in its entirety. We are steadfastly committed to open and accountable government. The intended policy goal of these changes was to provide a reasonable solution to protect constituents’ privacy and to encourage a deliberative process between elected officials and their staff in developing policy. It was never intended to inhibit transparent government in any way.

It’s impossible to imagine how the extensive changes proposed for the open records law could not “inhibit transparent government” since the changes, as Steineke indicated in his statement, were precisely to inhibit scrutiny of the government.

According to the statement from the governor’s office, changes to the open records law will be considered in a special committee. The committee should be made of pall bearers carrying the idea to the grave.

On the eve of our nation’s birthday, Wisconsinites were reminded again that we must be eternally vigilant because, as James Madison warned us, it will take more than “parchment barriers against the encroaching spirit of power.” Despite the distractions of holiday picnic plans and fireworks displays the public successfully defended our right to know what our government is doing. Let it be a lesson to Vos, whose birthday fell on the fifth, that Americans still prefer freedom over faction.