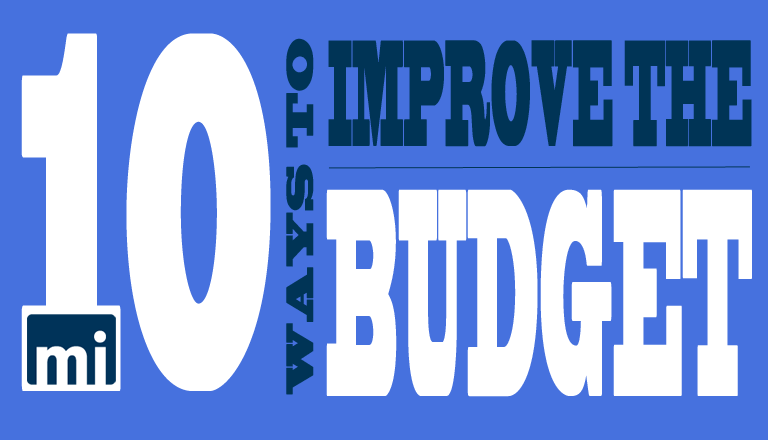 The 2015-2017 State Budget has finally made its way through the legislative process and sits on Governor Walker’s desk, awaiting his approval and signature. While this budget overall is a victory for Wisconsin taxpayers – no new taxes, no increase in income, sales or corporation taxes, another two year property tax freeze, UW tuition freeze – with a few tweaks, it could be better, much better.

If MacIver was king for the day and in charge of issuing vetoes (To our friends on the left, close your eyes and just try to visualize it), Wisconsin’s budget and future would be better off because we would :

1) Get Rid Of All The Pork – As MacIver has consistently said through the years, pork and earmarks are bad public policy and cheapen the budget process. There is $34 million of pork in this budget and while this list is not comprehensive, all pork projects deserve to be line-itemed out:

Finance added an amendment that would force the Department of Transportation to give the City of Kewaunee a $4.2 mil harbor assistance grant. Kewaunee should have to get at the back of the line and apply for the grant like everyone else.

And then there are all the parochial projects inserted by self-serving legislators more interested in the next election rather than good public policy. There is $15 million for the Eau Claire Confluence project, $5 million for the Wisconsin Agricultural Education Center, $3 million for a science building at Carroll University, $2 million for a Marquette University Dental Clinic and Education Facility (Good for good old MU as Professor Le Blanc used to say) and $500,000 for the Global Entrepreneurship Collective. Even though MacIver is a huge fan of entrepreneurship and the power of capitalism, we get a little nervous when you have collective in the name.

There is no greater example of how silly the legislature’s obsession with pork is getting then the language they inserted concerning the Frank Lloyd Heritage Trail. DOT will be directed to create a Frank Lloyd Wright Heritage Trail and be required “to place one marker facing each direction at the following locations: (a) at the junction of USH 14 and CTH Q in the City of Richland Center, identifying one end of the trail and also the Richland Museum and Visitors Center,” blah, blah, blah.

Are you serious!!?? Here’s an idea. If the Finance members are so worried about the precise location of their precious Frank Lloyd Heritage Trail signs, how about they take a flippin’ day out of their busy summer schedules to place the markers exactly where they want them and let DOT work on truly important projects like the Zoo Interchange.

2) Start Prevailing Wage Reform Now – Make the prevailing wage reform plan effective immediately, instead of 2017. Wisconsinites deserve to be rid of this outdated, expensive and unjust law as soon as possible, not in two years.

3) End, Once And For All, The Archaic And Unneeded Local Government Property Insurance Fund – The Senate reversed Governor Walker’s proposal that would have ended the unnecessary Local Government Property Insurance Fund (LGPIF). The LGPIF is a state-run insurance program, founded in 1903, to cover the property of local government in Wisconsin. It recently turned a deficit that will need to be covered by taxpayers and now is the time to end the program forever. There is plenty of competition in the property insurance market. Just a few weeks ago, the Onalaska School District dropped their LGPIF insurance and saved $27,000 on their premiums by switching to a private insurer, proving that the private market isn’t as scary as some claim.

4) Delete Any Last Minute Item That Could Increase The Cost Of Health Care – We are still trying to figure out the financial impact of some of these provisions and what they will do, if anything, to the cost of health care in Wisconsin. The so-called Dispute Resolution Process for chiropractic care sounds nice but it looks to be duplicative to us and counter to the free market. Duplication generally increases the cost of insurance premiums. The fact that the so-called resolution process imposes all the costs onto the insurers tells us which special interest group proposed the idea and its quality as a public policy proposal. But then again, that is probably why it was snuck in late during the budget process. Other last minute additions included the “Pharmacy Benefit Manager Regulation” and the “Authorization for Out-of-State Risk Retention Groups to Sell Medical Liability Insurance in Wisconsin.” Here’s an idea: let’s take all of these health care ideas out of the budget and run them through the Health Care Standing Committees.

5) Delete Any Change To Our Already Protectionist And Crony Capitalist Liquor License Process – The Finance Committee put so many alcohol amendments into the budget we need to ask if some of the members might have a drinking problem. Just kidding, bad joke. All kidding aside, why do we award liquor licenses through the state budget? Anyone? Finance gave the Town of Wyoming a special favor in the form of one additional liquor license and they also inserted a provision that allows municipalities that have reached their liquor license quota to borrow one from a contiguous municipality that has not reached its quota. And one unidentified Indian tribe with a reservation encompassing between 60,000 and 70,000 acres will be granted a liquor license. Clearly such an important priority for the entire state that it needs to be included in the state budget.

6) Reduce The Overall Number Of State Employees – This budget reduces by nearly 100 the number of General Purpose Revenue (GPR) state employees compared to the last budget. Unfortunately, even though holding the line on GPR spending is more important, we will still have nearly 600 more employees overall. With over 70,000 current state employees, the question is, do we really need 600 more?

7) Delete Another Trumped-Up Transportation Study – A $1 million dollars for another Department of Transportation(DOT) study of long-term financing solutions? Really??? We did this just two years ago and we think everyone can guess what the recommendations of this study will be: higher gas taxes, higher registration fees and more questionable spending. Questionable spending like $3.6 million dollars for A Bridge Too Near, a new pedestrian bridge less than a two minute walk from an existing bridge. Instead of a study, the legislature should audit every inch of the DOT to locate wasteful spending and non-critical road projects.

8) Pause Government Borrowing Used To Buy Private Land – Restore the Stewardship freeze that was originally suggested by Gov. Walker himself. The government already owns one in every five acres in Wisconsin. How much more land does state government need? Annual debt service for the Stewardship Program increased from $40 million in FY06 to $90 million in FY14 and is now responsible for an astonishing 70 percent of GPR expenditures at the DNR. Walker should stick to his guns and freeze the Stewardship program until a more sustainable debt ratio is reached.

9) Extend The Audit Of UW To Include All UW Subsidiaries – How can we have an honest debate about the proper amount of state support for the UW System if we do not have accurate financial information about the UW and all of its assets? The Wisconsin Alumni Research Foundation (WARF), UW Health, UW Foundation (UWF) and all other UW related entities need to be a part of the conversation. WARF and the UW Foundation have grown their assets to $6 billion dollars in recent years. A MacIver analysis found, in 2014 alone, UWF’s excess revenue and WARF’s excess revenue was $293.37 million. $293 million is very close to the original budget proposal to reduce aid by $300 million. Yet, this excess revenue of nearly $300 million is not part of the budget discussion. How is that honest budgeting? How is that fair to taxpayers?

10) Delete The Silly Star School Rating System – The legislature amended the Governor’s original proposal to grade schools with an easy to understand A-F with a one to five star system. There has been strong opposition for years from school administrators that a D or F grade for one of their schools will be a public relations nightmare. The Governor should delete the deletion, go back to an A-F system and administrators will just have to explain to their parents why their school really didn’t deserve that F grade. Love to hear that conversation.

Governor Walker will announce his vetoes soon and let’s hope he makes the 2015-2017 budget even better through the judicial use of his veto power.

Wisconsinites are counting on him.