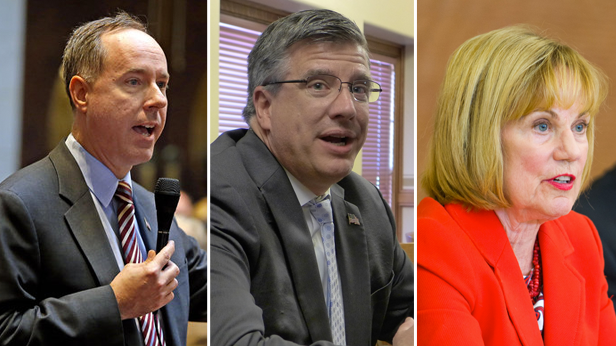 [Madison, Wisc…] In a rare case of public disagreement, Republican leaders have made it abundantly clear they are not even close to having a deal on the transportation budget.

It has been nearly three weeks since the Joint Committee on Finance last met as leaders in the Assembly and Senate have been trying to create the magic formula to finish their deliberations on Gov. Scott Walker’s budget.

The likelihood of a final agreement being reached this week fell quickly to zero after a back and forth between the top legislators in each house.

According to WisPolitics.com, Joint Finance Co-Chair Sen. Alberta Darling (R-River Hills) “believes her Assembly counterparts on the committee want to delay the Zoo Interchange to put pressure on the Senate to go along with a hike in the gas tax or registration fees.”

“Throughout the budget process, Assembly Republicans have put forth a position that the state must pay up front for its road improvements and not just run up the state credit card. However, we have been clear that we would not support an increase in the gas tax. As soon as it became known that the governor changed his position and would not support an increase in registration fees, that option was taken off the table. To say that Assembly Republicans are now pressing for both of these revenue enhancers would be incorrect In fact, Alberta Darling is being disingenuous in making that characterization.

“As Assembly Republicans move forward in the budget discussions, we want to ensure that any transportation reductions are felt equally across the state. Under the Senate plan, outstate legislators would feel the brunt of the cuts and many in our caucus don’t feel that option is fair. We are advocating for the best possible budget for all of Wisconsin and not just one area of our state. By working together, I know that we can arrive at solution in the near future.”

Darling then responded back.

“I stand by my comments. There are more responsible solutions we must consider.

“Delaying the completion of the core of the Zoo Interchange could jeopardize safety [and] would harm our state’s economy. I won’t let safety and our economy be used as bargaining chips.”

Rather than threaten the most important transportation project in the state’s history, perhaps legislators could more productively use their time by examining the questionable spending decisions in other areas of the DOT budget to root out waste and non-critical projects.

As the MacIver Institute has pointed out, there is clear waste at DOT, including murals on the bottom of a bridge, roundabouts in the middle of nowhere and fishing piers for small towns. Taxpayers, already stretched to their limit, look at all of this nonsensical spending and wonder how legislators could think about asking for more.

The Assembly leaders not only went after Darling in their release, but they also tried to claim Walker was originally in favor of increasing the vehicle registration fee. This, however, is not the case according to his staff.

“Governor Walker’s position has been clear and consistent – he opposes any increase in the gas tax or vehicle registration fee without a corresponding cut in taxes,” Laurel Patrick, spokeswoman for the governor, told the MacIver Institute. “He stated this position at various times during the campaign, he restated it to legislative leaders throughout the budget process, and he even met with the road builders. His position has remained constant.”

“As I said during the campaign, I oppose (& will veto) a gas tax or vehicle registration fee increase without a corresponding cut in taxes,” the tweet from @GovWalker read.

Instead of the legislature playing politics, Joint Finance members should look at how DOT is actually spending taxpayer funds. What is a need? What is a want?

Before legislators come back to the taxpayers for more of their hard-earned money, taxpayers need to know that DOT is being a good steward of the funds it already collects.