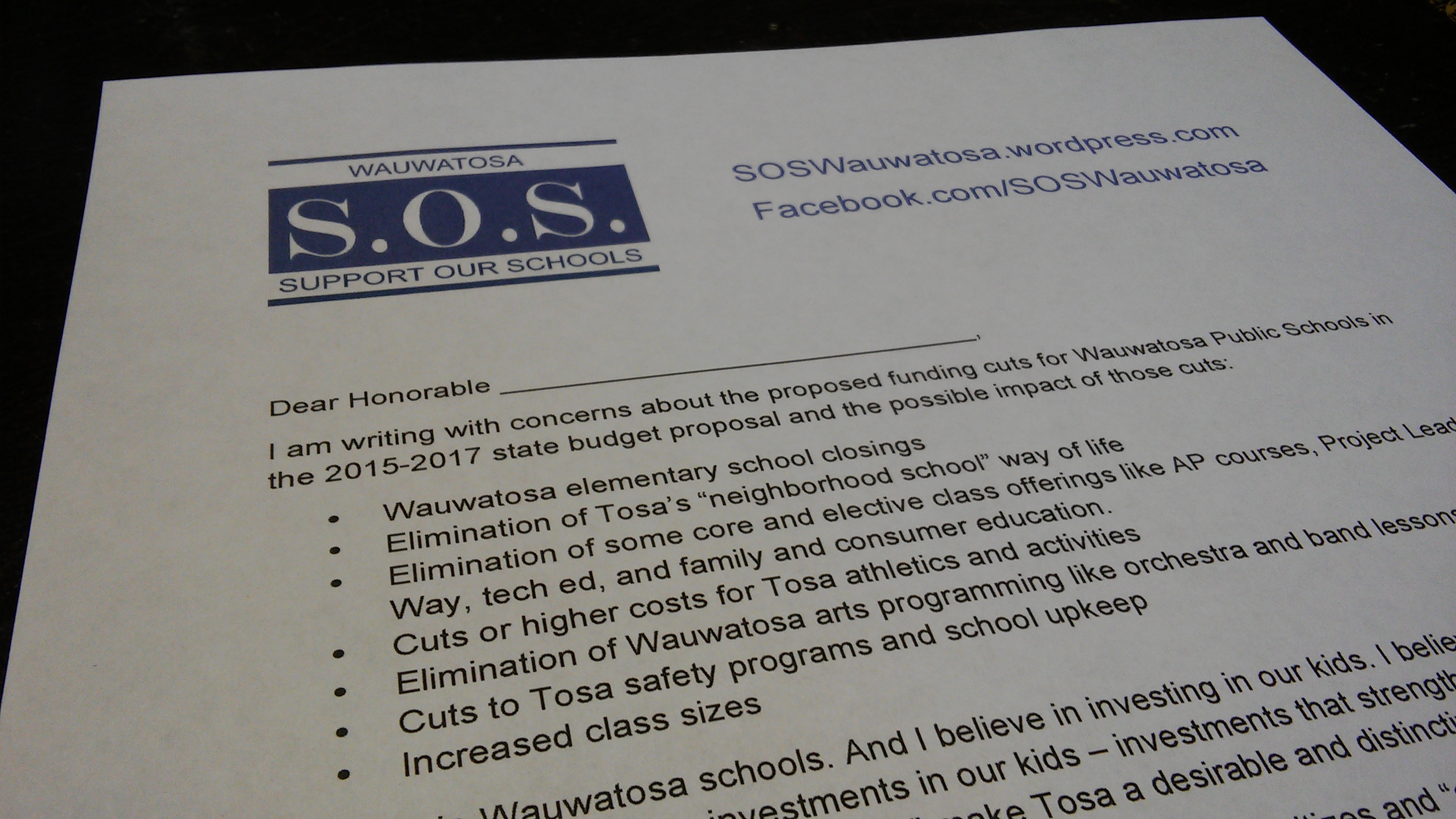 The sky is falling! Wait…..Again? Remember how opponents screamed at the top of their lungs that the sky would fall if Act 10 became law? Well, a few years later you can still look outside and see the sky up in the air.

Fast forward a few years, Governor Scott Walker’s proposed 2015 budget has once again caused rumblings that the heavens will suddenly come crashing down upon us, at least according to a group in Wauwatosa called Support Our Schools (SOS). They apparently have the self-appointed mission to ‘protect’ us from Governor Walker’s proposed cuts. Notice I used the word ‘proposed’.

That’s right, the cuts have not even been discussed in committee but the leaders of S.O.S. would have you believe that the cuts have all passed as proposed, schools would be closing soon and kids will be forced to learn by candlelight in their basements. In fact, from the moment the budget was proposed, many legislators, including many Republicans, were already on record opposing such large cuts. Making this far from a done deal.

I heard about this group from an email that was forwarded from Wauwatosa School superintendent Phil Ertl. It was as if he was endorsing their cause. So, having children in Wauwatosa Public Schools myself and always being skeptical of most groups like this, I decided to find out more about SOS. What I discovered was astonishing.

Looking at the SOS Facebook page I noticed many posts criticizing Governor Walker. That in and of itself was not surprising as it is his proposed budget and subject to such criticism. What did concern me was the overt bashing of Walker and other Republicans like state Senator Leah Vukmir – which was strange since she was one of the Republican legislators openly concerned about such large cuts.

The rhetoric being spewed was akin to what we heard during the Act 10 drama a few years back. Could this be another anti-Walker group trying to influence public perception? After all, it’s just a group of ‘concerned parents’ and is ‘nonpartisan’.

Then it hit me like a ton of bricks. The constant use of the word ‘nonpartisan’ is often a code word used by those on the Left. I randomly looked up ten of the commenters on the ‘I verify the Recall’ site. Nine of them were signers of the Recall. Go figure.

Going one step further, I did some research on one of the SOS founders and spokesman, Shawn Rolland. He was found to have a history of being a very involved Democrat activist. Don’t get me wrong, he is well within his rights to protest the cuts and be an activist. In fact, I applaud his being involved.
At issue here are the tactics being employed in an attempt to ‘influence’ (indoctrinate). SOS leaders have been getting unprecedented access to School Board email lists, PTA email lists, etc. Plus, the aforementioned ‘endorsement’ by the Superintendent.

As if that were not bad enough, I was approached by a couple of Wauwatosa West High School parents and students informing me that one of the Career Center Coordinators (and recall signer) Barbara Lauenstein, was handing out SOS flyers to students, during school. She was explaining to students that the cuts were bad and would almost immediately cause the end of programs and many school closings. Basically taken right out of the Teacher’s Union playbook from the Act 10 battle.

By allowing this, did the leadership at West sanction this? Does something overtly political and one sided even belong in school? Since there is not yet an agreed upon budget, the information being spread is dishonest at best, and the fear mongering is darn right cruel to the students.

SOS can market all they want, but they should not be given the access they have had to date. Administrators, faculty, and PTA leaders must immediately stop promoting this clearly Left Leaning and very-partisan group. Could you imagine the uproar if I would hand out NRA flyers during school promoting responsible handgun ownership?

Bashing our leaders and exaggerating facts because you have a political axe to grind is accomplishing nothing. In fact, it makes people ignore one’s message by alienating people on the other side. A better way to approach this is for the leaders of SOS to work with our legislators to come up with plans to reduce the cuts and then work with the School Board on the best way to apply whatever cuts get passed.

Then, this will truly be about our kids and the heavens will remain intact. In fact, this will make all parents march in, dare I say it, ‘solidarity’.