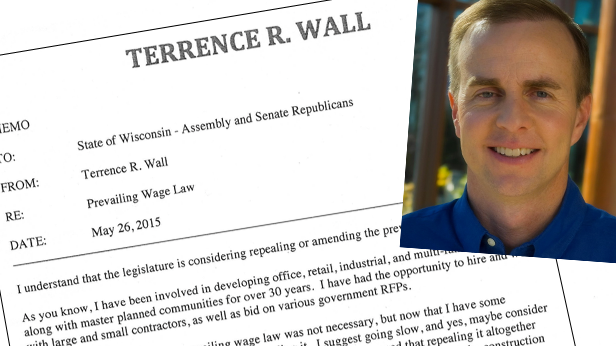 [Madison, Wisc…] Republican legislators received a letter on Tuesday – later obtained by the MacIver Institute – opposing the repeal of prevailing wage that made some pretty outlandish claims. While the over-the-top rhetoric in the letter may not have been surprising to those that have lived in Wisconsin the last five years, the author of the letter who made the claims may turn more than a few heads.

Instead of coming from a professional protester or labor union boss, the letter was signed by Terrence Wall – a Republican who ran for U.S. Senate in 2010 and is a developer in Madison. Wall dropped out of the race shortly after now-Sen. Ron Johnson won the endorsement at the party’s convention that year.

In his letter dated May 26th, Wall makes a lengthy case for why Wisconsin should, at the very most, modify the prevailing law – which artificially inflates wages for public works projects.

In the letter, Wall wrote:

“The point is that if the prevailing wage law were completely repealed, given that the low bidder typically wins the government job, I am certain that this would be prove to be [sic] a disaster, resulting deaths on the job, cost overruns, delays and the like, because smaller contractors would under bid the true cost of jobs (without knowing it), win as low bidder, and then find out on the job that they are totally unprepared for the size of job. Why do I say deaths? Because smaller contractors do not have the safety departments and internal inspectors that large contractors have.”

Later in his letter, Wall implies that without prevailing wage the quality of projects would plummet.

“Repealing prevailing wage will undermine the entire wage structure in this state. Do we really want to end up like a third world country? Because that is what we’re going to get – without a middle class, democracy cannot be sustained long-term, so legislators, make your choice carefully…”

In the end, Wall simply played the politics card.

“Lastly, speaking politically (I know that is not what you want to talk about, but as a free citizen I can speak my mind), those prevailing wage union workers helped elect a Republican legislature, so if you repeal prevail [sic] wage, do not expect or ask for their help in the future.”

Reading Wall’s letter may make the casual observer to believe that without prevailing wage, Wisconsin will have buildings that are crumbling to the ground. However, estimates from industry experts say that 80 percent of the projects in the state are not subject to prevailing wage.

Does that mean it isn’t safe to walk into any of the private buildings in the state? Your office building? Your local Home Depot? Your home?

Stan Johnson, President of A.C.E. Building Service in Manitowoc, had a simple response to Wall’s comments.

“That’s an outrageous claim,” he told the MacIver Institute in an interview.

“About 80 percent are non-union, which means 80 percent of the buildings by his claim are about ready to fall down,” Johnson said. “I find that hard to believe.”

“I know as a business owner here that we put in a lot of time and money to make sure our people are safe and well-trained,” Johnson said.

While the debate over the law continues, the future of a full repeal is uncertain. The Assembly Committee on Labor voted on Tuesday to approve a bill that would repeal prevailing wage, however Assembly and Senate leaders have not said if they would take it up.

Gov. Scott Walker put added pressure on legislators early Thursday morning when he told reporters that he would prefer a full repeal over just reforms to the law.

Continue to check MacIverInstitute.com for updates as we will publish them as they come available.