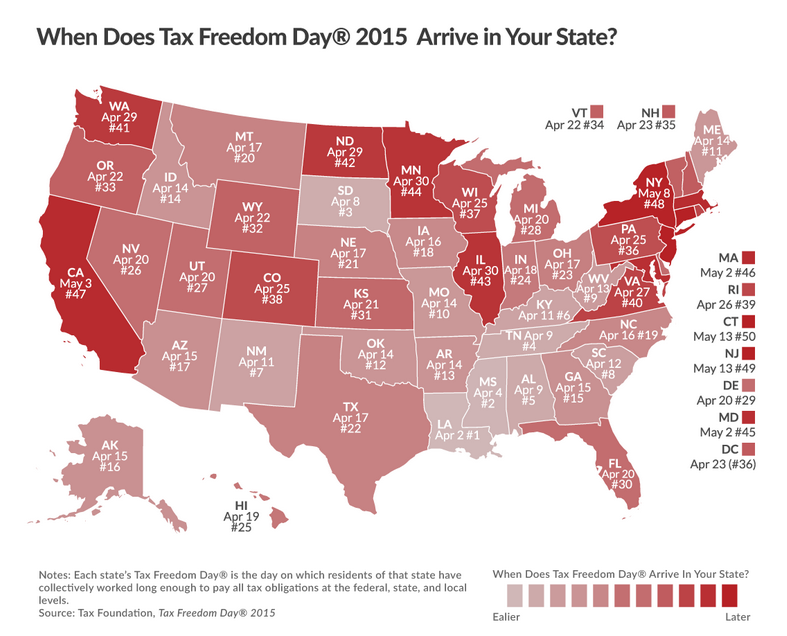 [Madison, Wisc…] On April 25th, Wisconsinites will have worked enough days to pay off the taxman. That’s according to the Tax Foundation’s Tax Freedom Day initiative, which finds out how long the average citizen in each state must work to pay off all local, state and federal tax liability.

Wisconsin’s Tax Freedom Day comes later than 36 other states for the second year in a row. Things have improved from two years ago when Wisconsin was among the last 10 states to reach their respective Tax Freedom marks, but a bottom 15 finish is not exactly a win for taxpayers.

Wisconsin is still on the right trajectory, however, because Wisconsinites have received $2 billion of their own money back since 2011. This is thanks to $746 million in income tax cuts, $535 million in property tax cuts and $131 million in business tax credits and other tax reductions.

The governor’s budget is another welcome sign for taxpayers as it includes $211 million in property tax relief through the school district levy credit.

Wisconsin’s Tax Freedom Day is three days later than last year, but many states will be celebrating later this year because of more overall taxable revenue from increased economic growth.

“Because our tax system–particularly our federal income tax–is progressive, improvements in national income due to economic growth push taxpayers further and further up the tax bracket scale, meaning more of their income is subject to taxation,” explained Drenkard.

Tax Freedom Day is a sober reminder that Wisconsinites have a higher tax burden than nearly three-quarters of the states.

While the efforts of the governor and legislature have gotten Wisconsin back on track after years of massive budget deficits and billion dollar tax hikes, there is still a lot of work to be done.

Iowa, Indiana, and Michigan all have earlier Tax Freedom Days than Wisconsin thanks to their lower overall tax burdens. It is no coincidence that job growth in these states has been higher than Wisconsin’s over the last few years.

On the other hand, Wisconsin’s taxpayers are fortunate not to have tax burdens quite as high as Minnesota’s and Illinois’. Minnesota has been raising taxes over the past few years, including adding a new top tax bracket at a higher rate. Apparently its top income tax rate of 7.85 percent was not high enough, so Minnesota added another bracket at 9.85 percent.

But even tax-happy Illinois has a much lower income tax rate than Wisconsin. After staving off attempts by Democrats to make Illinois’ 67 percent “temporary” income tax hike permanent, Illinois taxpayers are seeing fatter paychecks after the rate was dropped back down to its original 3.75 percent rate.

Fiscal responsibility has been restored in Madison, but our leaders must continue to find ways to reduce spending and shrink the size of government if we want taxpayers to be able to keep more of their hard-earned money.

Paying less in taxes means more road trips with the family, more savings for college and a greater ability to invest in your priorities, not the government’s.