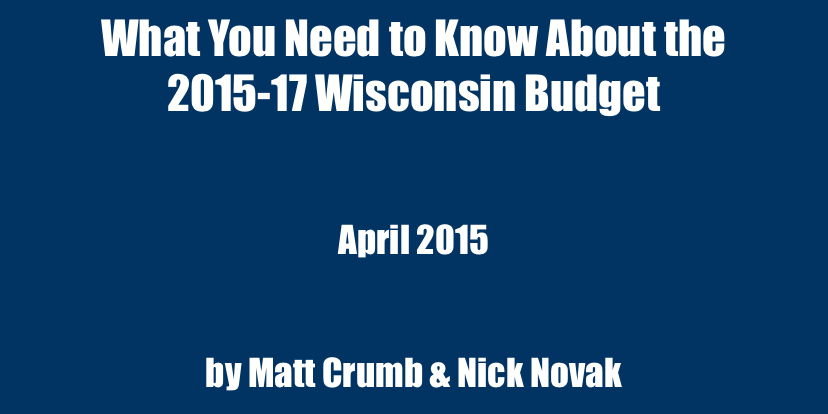 by Matt Crumb and Nick Novak

[Madison, Wisc…] As the nicer weather approaches in Wisconsin, so does debate on the 2015-17 state budget. Gov. Scott Walker introduced his plan to lawmakers in February, and the Joint Committee on Finance (JFC) held four public hearings around the state last month.

Members of JFC will begin debating and voting on portions of the budget in the coming weeks. The full proposal is expected pass out of the budget-writing committee before Memorial Day, and the full legislature is expected to take up the budget bill in June.

Every inch of Walker’s proposal will get scrutinized during the process, and by the time it gets back to his desk, the bill will likely look different than it does now. But, before JFC starts making changes, we put together this short synopsis of the 600-page document.

Here is what you need to know about Walker’s 2015-17 budget proposal:

GPR spending is especially important because it is the funding that can be completely controlled by the state. All GPR funds come directly from Wisconsin taxpayers – income taxes, sales taxes, etc.

The budget would spend $1.67 billion less than the previous budget – a drop of 2.4 percent – but that is mostly thanks to Walker’s plan to make the University of Wisconsin System its own public authority.

Without adjusting for this change, spending would actually increase by $3.09 billion – a jump of 4.4 percent.

In addition, the budget would also borrow $1.56 billion for transportation, a new Bucks arena and a couple smaller projects. Transportation bonding accounts for $1.30 billion of that borrowing, while the Bucks arena plan requires $220 million in bonding.

Bonding would be down from previous budgets, but DOT specific bonding would go up significantly from previous years. The 2013-15 budget borrowed $2.05 billion overall, with just under $1 billion going toward transportation.

To read the rest of this report, please click here to open the PDF file.