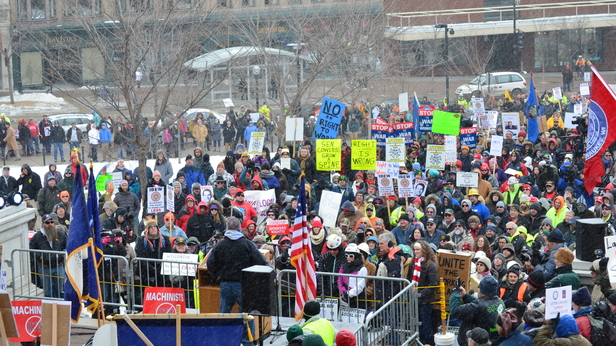 [Madison, Wisc…] Three unions – including the AFL-CIO, Machinists Local Lodge 1061 and the United Steelworkers District 2 – filed a lawsuit on Tuesday against the state over the new right-to-work law.

Gov. Scott Walker signed the bill into law on Monday at Badger Meter, Inc. in Brown Deer – making Wisconsin the 25th right-to-work state in the country.

Right-to-work gives workers the freedom to choose whether or not they join a union and pay union dues, and it makes it illegal to force a non-union member to pay so-called fair-share dues.

The three unions filed the lawsuit because they claim right-to-work causes an unconstitutional taking of their property without fair compensation.

According to the unions’ lawsuit, Wisconsin’s right-to-work law “deprives the unions of all methods of charging nonmembers for the services that they receive from the unions. In other words, it requires that unions either provide free services to nonmembers or go out of business entirely.”

In forced unionization states, unions can require non-union members to pay fair-share dues to cover the costs of union representation, whether or not the worker wants to be represented by the union.

While the unions claim right-to-work is unconstitutional, the courts have recently upheld similar laws in Indiana and Michigan. Rick Esenberg, President and General Counsel of the Wisconsin Institute for Law and Liberty, said he expects the Wisconsin law to be upheld, as well.

“This is just a Hail Mary pass with virtually no chance of success,” Esenberg told the MacIver News Service (MNS). “If the unions’ theory was correct, much of what we regard as garden variety economic regulation would be unconstitutional.”

A Michigan legal expert said the unions’ argument that they would be providing a service for free does not hold water.

Patrick Wright, Vice President for Legal Affairs at the Mackinac Center for Public Policy, told MNS that right-to-work laws have been constitutional for 70 years. Referring specifically to the unions’ argument that they are not being compensated for covering non-union members, Wright claims there is a value to be had for getting exclusive representation.

“The unions get a gift in that they get exclusive representation, and so they are not doing something for free,” Wright said in an interview. “They are getting to represent people who don’t want to have the union represent them. So, they are actually receiving something in exchange for the duty of fair representation.”

The lawsuit was filed in the Dane County Circuit Court, and a hearing is scheduled for March 19.