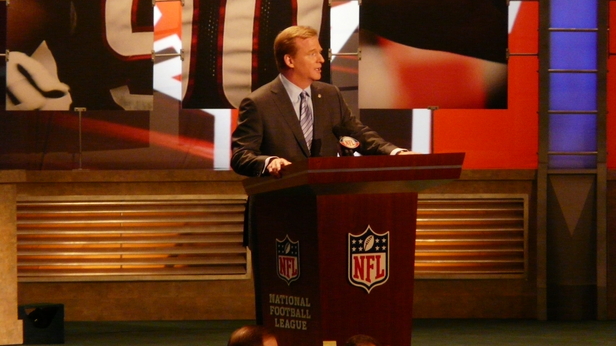 They’ll appear on boxes of cereal or appear with trial lawyers in television ads, but don’t expect professional athletes to endorse Right to Work. That’s the message of the NFL Players Association.

In a statement last week, the NFLPA said:

“The NFL Players Association stands together with the working families of Wisconsin and organized labor in their fight against current attacks against their right to stand together as a team.

“Devoted food and commercial workers who spend their Sundays servicing our players and fans at Lambeau Field will have their wellbeing and livelihood jeopardized by Right to Work. Governor Scott Walker may not value these vital employees, but as union members, we do. We understand how devastating it would be if they lost the ability to have their workplace conditions and wages guaranteed through collective bargaining. We do not have to look any further than our own CBA to see that a band of workers, joined together as a union, can overcome decades of poor workplace conditions and drastically improve pensions and benefits.”

“Our guys work for a living. And when it comes to the issues of working men and women in America, our issues really aren’t so divergent from theirs. Our guys want a safe workplace. They want a fair wage. They want a fair pension. And they want to know that they can address all of those issues as a collective team rather than being subjected to an employer who has a significant, if not tremendous, amount of bargaining leverage over an individual.”

It’s almost touching to see professional athletes, or at least their unions, attempt to feel for the common man that spends entire paychecks to take their families to a ballgame to watch the athletes play.

With the support of the NFLPA behind them, Democratic State Senator Chris Larson even declared, “If you’re going to pass this, you’re going to stand up against the Green Bay Packers.”

But before we start worrying about whether the Packers will suddenly show up for Thursday’s vote and do a Chuck Cecil on some unsuspecting Republican legislators, a little perspective is in order. The players may wear the union label next to their Nike swooshes, but the reality is a little bit further removed from the picket lines.

That’s okay because the previous year the players actually renounced their collective bargaining rights as part of their labor dispute with the NFL. The tactic was used in an effort to attack the NFL on the antitrust front when the league locked out the players. Unions are great, until they’re in the way.

Renouncing the union’s role as a collective bargaining agent was not a one-time tactic. The players previously resorted to this tactic after the union’s most spectacular failure.

In 1987, the players association went on strike. The owners only canceled one week of the season and then brought in replacement players. Despite a drop off in quality, most fans still watched while the regular players watched from the sidelines. Some of the regular NFL players, including Joe Montana and Steve Largent, exercised their freedom of choice to cross the picket lines to play in the games. With the crossing of the picket lines, the strike collapsed and the union was left without an agreement with the owners. The players had to fight for free agency through the courts instead after, you guessed it, decertifying the union.

As debate begins in the state Assembly Thursday morning, the Democrats will be proud to say that the NFLPA is standing behind them against Right to Work. When they do, I hope they remember that the NFLPA is where one of their great candidates for public office got his start. By the way, does anyone remember how the Democratic Party fared with Ed Garvey as its standard bearer?

When supporters of Right to Work win the big game this week, workers will get to choose whether a union represents them. They won’t even have to decertify the union like NFL players if they choose to be non-union employees. More important, Wisconsin workers will have the same workplace freedom as NFL players in twelve other states. The players and fans will finally have something in common.