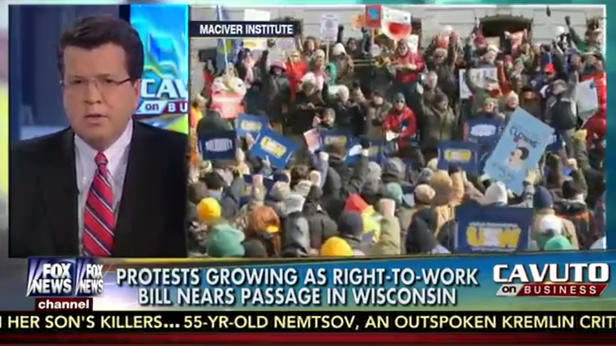 The Wisconsin State Assembly will take up a right-to-work bill beginning on Thursday at 9am. Debate on the floor has been limited to a 24-hour period, which means the bill will be voted on by 9am Friday morning. Right-to-work has been discussed for the past couple weeks in the state’s legislature and it is getting national attention.

Wisconsin would become the 25th right-to-work state in the country if the bill is passed and signed by Gov. Scott Walker. The governor has already said he would sign the bill if it made it to his desk.

With the nation’s focus once again on Wisconsin, Neil Cavuto and his panel on FOX News Channel discussed the upcoming legislation. They also discussed the protests that happened last week, using footage captured by the MacIver Institute.

Check out the video from Cavuto’s show below: