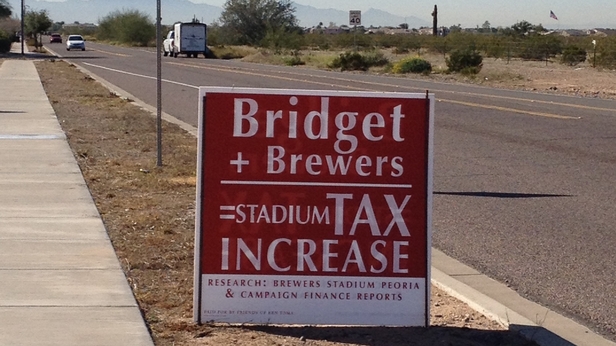 By coincidence, my annual trip to temporarily escape the cold winds of Wisconsin has taken me to the warmer climes of Arizona where pitchers and catchers are already reporting for the Milwaukee Brewers spring training. The Brewers are gathering in Maryvale while I’m staying closer to the San Diego Padres and Seattle Mariners in Peoria. The slight rain today probably made the latter team feel like they were home.

If the Brewers have their way, they may become the third team to open a training facility in Peoria. The Brewers are also considering the Gila River Indian Community and Fort McDowell Yavapai Nation, according to SpringTrainingOnline.

The Maryvale facilities, the only Cactus League location still in the city of Phoenix, have become “a dump” in the words of my brother-in-law, a long-time resident of the area. The Brewers have been playing there since 1998. Before that, the team was in Chandler, AZ.

In 2012, the city of Phoenix put up $1.5 million for repairs to Maryvale, of which $1 million will be reimbursed by the Arizona Sports and Tourism Authority in 2021. The city estimated the team brings $3 million annually in economic activity, according to the Arizona Republic. The Brewers lease requires the team to give a year’s notice before moving.

Much like the debate of the Milwaukee Bucks new arena, and the debate over Miller Park at the turn of the Millenium, the question is how much will local taxpayers be willing to subsidize a new sports arena for a professional team?

The debate has already had an effect on a special election for city council in Peoria, a community of over 154,000 people according to the last census. Last fall, current council member Ben Toma has accused his opponent, Bridget Binsbacher, of taking money from “Major League Baseball executives.” Toma campaign yard signs along the road say, “Bridget + Brewers = higher taxes.” The special election is March 10th.

A new stadium for the Brewers will not be cheap. The Chicago Cubs moved into a new $99 million dollar facility in 2014. The city of Goodyear built a stadium for $113 million for the Cleveland Indians in 2009.

If Peoria wants the Milwaukee Brewers, the money will have to come from the city. The Arizona Sports and Tourism Authority ran out of money last fall and had to put off payments to Glendale and Goodyear. The cities may not receive the $100 million promised until sometime between 2021 and 2031, according to the Arizona Republic.

The authority depends on a one percent hotel tax and a 3.25 percent rental car tax. The recession and over-optimistic projections of revenue have left the authority without any money. Making matters worse for those communities that depended on the authority, the state authority has no legal obligation to pay the cities, and the whole fund may be phased out in 2031. Complicating the issue has been the continuous improvement of sports facilities in an effort to attract Cactus League teams.

All this might mean the Brewers will entertain offers from Native American tribes to consider tribal land because they may be able to provide the financing, whereas Peoria would not have the state sports authority to provide financial backing.

For Peoria to be in the running, the city will have to turn to the taxpayers. Peoria has a city ordinance in place that calls for voters to approve in a referendum any sports facility costing over $500,000. That means the voters will have final say if the Brewers and Peoria work out a deal.

In contrast, none of the participating counties were asked to vote in a referendum when the sales tax increase financing Miller Park passed the legislature and went into effect. The voters will not be given a direct say in the financing of a new arena for the Milwaukee Bucks, either, even though state income taxes are being diverted from the general fund under Governor Scott Walker’s budget proposal.

Even as Peoria begins a debate over attracting another major league team for spring training, a former Milwaukee Brewer community is moving on.

From 1986 to 1997, the Brewers played their spring training games in Chandler, AZ. The city decided against spending $14 million to make improvements to the stadium to “compete” with the other new facilities being built at the time. The Brewers moved to Maryvale and left an empty stadium behind.

Chandler has now sold the property to a developer, likely ending any chance of spring training baseball returning to the city. Chandler spokesman Dave Bigos told BondBuyer.com, “We don’t have that much vacant land left in the city.”

After the Brewers left, the city focused instead on attracting industry. Intel has a $5 billion campus in the city built on former farmland. Except for infrastructure costs such as roads, Intel did not receive a subsidy from the city.

Now a 318 home development, a welcome addition to the tax base, is being built on the site of the old spring training facility. BondBuyer.com reports the city is refinancing its debt and will save $8-$9 million annually thanks to the AAA rating.

The Arizona Republic reported that almost all Cactus League stadiums lose money. What the communities are left debating is whether the spin off entertainment economic development is worth taxpayer subsidies for major league sports teams. For the teams, of course, it will always be worth it as long as they can convince local communities to continue to play ball.