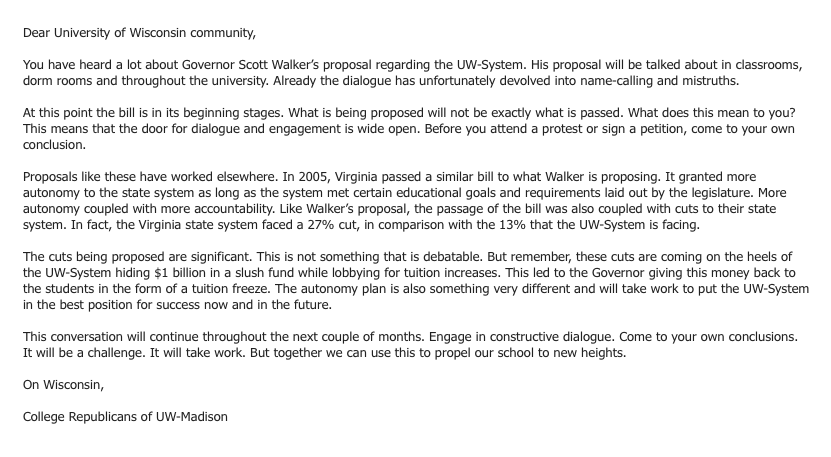 [Madison, Wisc…] College Republicans at the University of Wisconsin-Madison faced a backlash from fellow UW students after sending out a campus-wide email supporting Gov. Walker’s budget proposal. Some of the responses were profane and vulgar.

The group paid $100 dollars to send the email to those with a UW-Madison email address in an effort to add more than one perspective to the conversation. Chancellor Rebecca Blank and other groups have recently sent emails outlining their concerns with Gov. Walker’s proposal.

Walker’s budget proposal would give the University of Wisconsin System more autonomy and budgetary flexibility in exchange for a decrease in funding of $150 million annually over the next two years. The plan would fund the UW System through a block grant and include another two-year tuition freeze.

Charlie Hoffman, Communications Director for the UW-Madison College Republicans told the MacIver Institute that “After receiving numerous emails from the Chancellor and the student government we felt it was necessary to present the other side.”

The group expected to receive a response from students, but did not expect it to be “this hateful or extreme,” stated Hoffman.

A sampling of the vulgarity contained in the emails was sent to the MacIver Institute:

“You must have a big hairy pair of brass b**** and a marginally functional brain to be recruiting for Republicans on the UW campus right now.”

“F*** republicans. They are ignorant and hateful people.”

“F*** you and the horse you rode in on. Walker apologists.”

In their email, the College Republicans acknowledged that discussion surrounding Walker’s budget proposal “has unfortunately devolved into name-calling and mistruths.” They asked students to engage in constructive dialogue and come to their own conclusion before protesting or signing petitions.

This isn’t the only time the group has recently faced a profane backlash for offering a different perspective on the Governor’s budget proposal. A comment in response to a letter to the editor in the Badger Herald stated, “Scott Walker is a pompous boob who hates children.”

When the group shared a second counterpoint article on February 9th in the student publication, The Badger Herald, one commenter on their Facebook page said, “You guys are like strippers for the Koch brothers. How does it feel when David Koch b**** slaps you with his invisible hand.”

Spokesperson Hoffman added that the responses they received from various individuals “did not seem to live up to the ‘sifting and winnowing’ that embodies the Wisconsin Idea.”

Walker’s proposal is currently before the legislature’s Joint Finance Committee. Public hearings on the proposal will be scheduled soon. The legislature hopes to finish their deliberations on Gov. Walker’s budget by June.