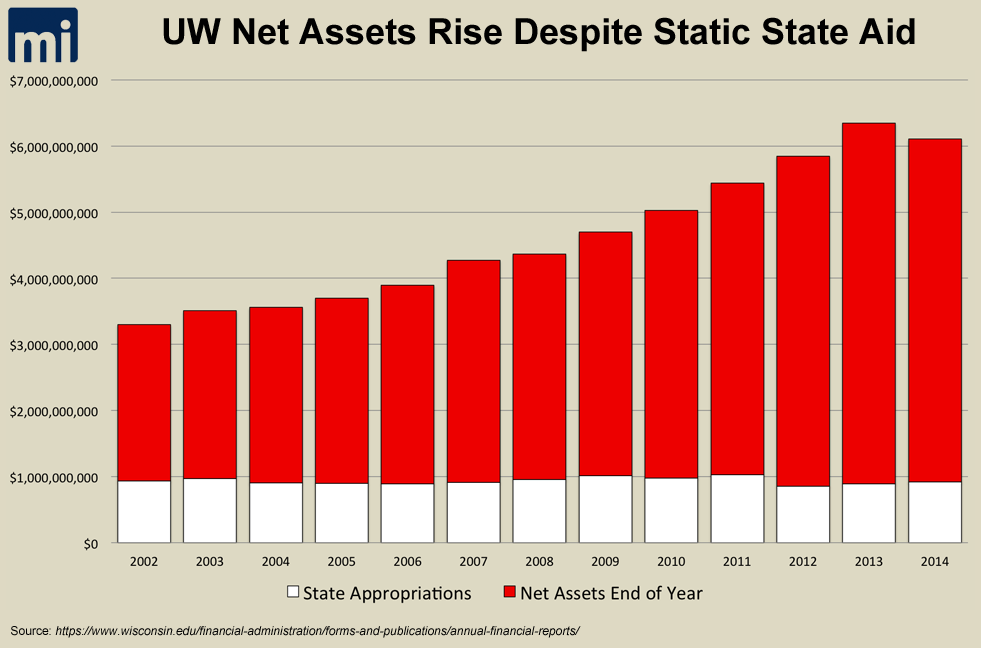 Lawmakers were furious that the system had continued to raise tuition and ask for more state aid while those balances had built up. They took corrective action that included a tuition freeze, a cut in state aid, and an annual reporting requirement on those program revenue balances.

Following that incident, the UW System provided budgeting guidance to its institutions to submit spending plans for all fund balances greater than 12 percent of their expenditures. Those details and plans were included in the system’s report to the legislature in October 2014.

Four months later, Governor Scott Walker proposed once again freezing tuition and cutting total state aid to the system by $300 million over the 2015-17 budget from the current level.

UW Officials say the system will not be able to absorb those cuts. They also maintain the UW System never had that billion dollar “slush fund,” the legislature claimed they did last session. Pointing to the October report, the UW System says it already has plans for most of its program revenues.

That likely will not be enough to keep those balances out of the upcoming budget debates. According to that October report, “Program revenue has increased in recent years and now represents over 80% of total funding for the UW System.”

However, the UW insisted those funds should not be seen as a rainy day account. According to its report, “the individual balances throughout the UW System are held for literally hundreds of specific, locally necessary reasons including emergency reserves, savings for large future purchases, ensuring positive cash flow of each self-supporting operation, new initiatives or programs, and smoothing the effects of unexpected budget changes.”

The report lists many of those “specific, locally necessary reasons.” Each item is identified as either an “obligated” or “planned” expense. Many of the “planned” items could become liabilities during the upcoming debates. Some examples include:

These items and many others made it possible for the UW-System to report that $711 million of its $973 million fund balance is already spoken for. Of that amount, $274 million are firm commitments and the other $437 million were planned expenses at the time of the report. Critics of the UW suggest that planned expenditures are not a legal commitment and could be redirected to deal with the proposed cut in state aid.

The October report also recognizes that program revenues are not off limits. Unbelievably, “For the first time in UW System history, Program Revenue Fund Balances are now incorporated into the Board’s discussion of the annual and biennial budgets,” according to the report.

Altogether, the System reported that the schools have $175 million in real, actual reserves. They say that’s $40 million down from the year before and expect that downward trend to continue.

Once again, the governor’s proposal would cut state appropriations by $150 million for the first year, and maintain that level of funding for the second year.