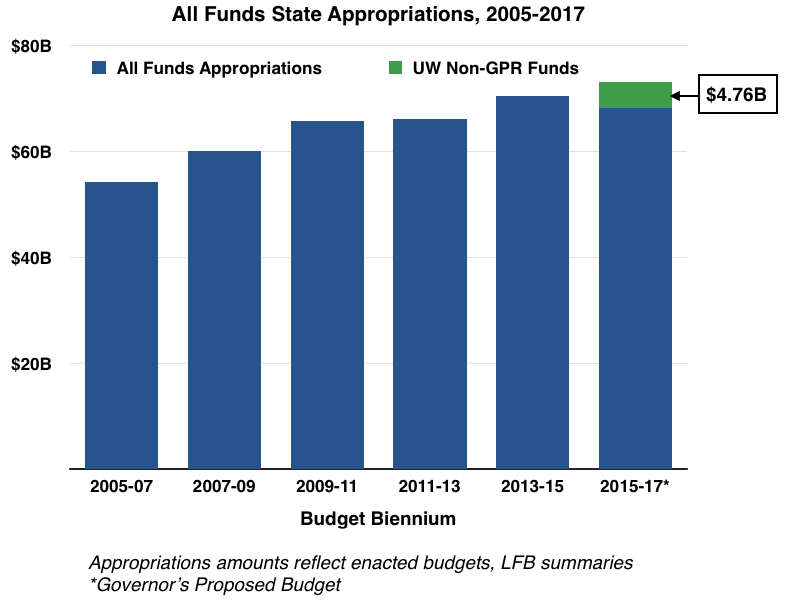 LFB analyzed spending, revenue and state full-time equivalent (FTE) positions under the governor’s proposals, coming to many of the same conclusions that have circulated since the budget’s release earlier this month.

Base-year doubled is the amount used by the Fiscal Bureau to compare the current budget to spending in the last budget. Because Wisconsin uses a biennial budget, LFB doubles the amount spent in the second year of the previous budget to supply a “base” amount for current spending levels.

However, the caveat in the calculations for Walker’s proposed budget is that it leaves out $4.76 billion in federal funds, program revenue, and restricted funds for the University of Wisconsin System in FY17 that is included for FY16 and all prior budgets.

The reason for leaving non-GPR funding out for UW in the budget’s second year is because of Walker’s plan to “spin-off” the system to run as it’s own private authority in FY17. If that happens, only GPR spending for the UW System would show up on the state’s spending records as the new UW authority begins to manage its own finances.

If the UW funds were added to total state spending – to mirror previous budgets – the result is a jump to $73.1 billion. That is a 4.4 percent increase over the base-year doubled.

The same transition would happen to the state’s record keeping of FTE employees. Under the plan, Wisconsin would technically lose the UW System’s 35,000 plus employees to the new authority. The LFB includes this count in its summary, making state FTE employee losses look more dramatic than they actually are. Non-UW System FTE employees would be reduced by a little over 400, according to LFB, which is similar to the governor’s projections.

State tax funded GPR spending would go up 3.2 percent in the proposed budget, or by $1 billion. Over $634 million of the GPR spending increase is for costs to continue for Wisconsin’s Medicaid program, accounting for 63 percent of new spending.

Another $211 million in new GPR spending is for property tax relief in the form of increased school levy credits split between two years.

Altogether, keeping up with Medicaid costs and property tax relief would account for 84 percent of new state sourced spending.

By category, over 90 percent of total state tax funded GPR spending is made up of education (44.1 percent), including K-12, UW, technical and medical colleges; human relations and resources (32.9 percent), which encompasses all health care, welfare, and corrections spending; and shared revenue and tax relief for counties and municipalities (13.7 percent).

Walker’s proposed budget would also bond $1.56 billion, a decrease from about $2 billion in the previous budget. A large majority of the bonding – about $1.3 billion – is for transportation spending.

The Joint Committee on Finance is expected to begin department hearings for the budget in early March. The final budget will likely be signed sometime in June, before the end of the fiscal year on June 30.