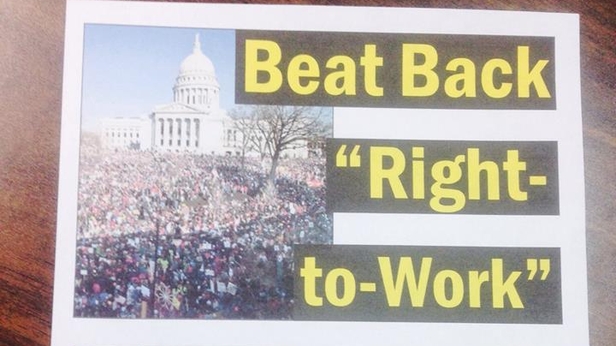 [Madison, Wisc…] Right to work will be the last straw, according to labor activists attempting to build momentum for a general strike in Wisconsin.

“I doubt rallies alone are going to do the job. You need to strike,” one blogger, “bluecheddar”, posted on Saturday.

Then on Sunday, three labor unions agreed to a general strike during a luncheon in Madison, according to Mike Crute, a co-host of the Devil’s Advocate radio show.

“Expect calls for a General Strike Tuesday when the AFL-CIO rallies opposition [sic] to the Republican fast-tracking of #RTW Tuesday at the Wisconsin State Capitol,” according to Crute on his blog post on Sunday.

A general strike would mean everyone in the state would stop going to work, thereby shutting down the economy.

Crute wrote that such a general strike would not be based entirely on opposition to right to work. It would include causes like UW and K-12 funding, the Kenosha casino, and Medicaid.

For now, there does not seem to be much consensus on how to approach a general strike. The group, WI Bail Out the People, is circulating a flyer that states, “No general strike can be rushed into. Workers must be educated and the ground carefully prepared. Holding a referendum vote in every local union gives the opportunity to discuss this unprecedented attack and how to respond with every worker at every work place.”

On Monday evening a large coalition of progressive groups in Milwaukee met at Zeidler Union Square at 5PM to protest right-to-work. Some of the groups included: Defeat RTW in WI, AFSCME District Council 48, Occupy Milwaukee, and Voces de la Frontera. About 100 people showed up to the rally.

Another group met on Monday at the State Capitol to discuss ways to protest the right-to-work bill that will likely be approved in the coming weeks. One member of the small group suggested causing traffic jams on Wisconsin’s interstate highways at the state lines.

“Well I think what we should do is shut down the highways coming into and leaving the state,” one attendee said.

That individual went on to explain how a minimum of four people could circle back and forth by the state line near beloit, driving around 35 miles per hour, to slow up traffic in protest of right-to-work and other policy items coming up this session.

“Lets say down in Beloit if you know that area, start in Madison…starting like a couple of exits before the state line, slow down, side-by-side, 45 miles an hour. Go to Beloit, through Beloit, and when you cross the state line, exit and get on and come back the other way doing 45, and then behind you, 5 minutes behind you, you have somebody doing 35,” the person suggested.

This group did not discuss the idea of a general strike.

The AFL-CIO supposedly was not part of the general strike conversation on Sunday either, according to Crute. That union is preparing a traditional strategy to stop the proposed legislation. It is encouraging its supporters to attend the Senate Labor Committee hearing Tuesday morning. The union also is circulating an online petition. And, of course, it is sponsoring noontime rallies at the Capitol on Tuesday and Wednesday.

The other unions that agreed to a general strike plan on making their announcement at the Tuesday rally, according to the Daily Kos.

This is not the first time union supporters in Wisconsin have threatened a general strike. Four years ago during the Act 10 protests, there were calls for a general strike. These calls even got to the point where the “South Central Federation of Labor in Madison passed a resolution with similar plans in Feb. 2011,” according to WI Bail the People Out’s flyer. However, a post Act 10 general strike never actually got off the ground.

The last general strike in the US was in Oakland in 1946, according to the Socialist Worker. Even then, only 15,000 people participated at its height.