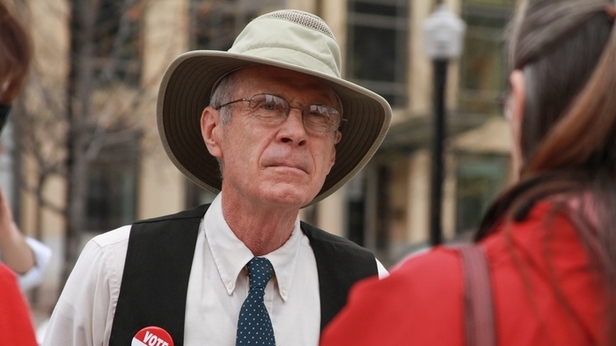 Secretary of State Doug La Follette, the Milton Waddams of state government, is not happy with his new office assignment. Included in Governor Scott Walker’s budget proposal is a plan to move La Follette into the Capitol basement to share office space with State Treasurer Matt Adamczyk. It may be the oddest pairing not on stage in a Neil Simon play.

La Follette invited legislators to take a tour of his new digs. When none of them took him up on it, some of the press followed him instead. La Follette tried to claim that his new office would be inaccessible to the public but, as the Milwaukee Journal Sentinel reported, the stairway and elevator could be modified to allow the public to visit.

As for La Follette’s new roommate, Adamczyk probably won’t be offering his new pal any sympathy. Adamczyk just laid off his staff and cancelled the new cell phones and computers. As soon as he can rid himself of the accumulated knick knacks such as the toy piggy banks his predecessor acquired, Adamczyk’s total footprint in Madison will be a desk, a chair and a website. If Adamczyk had his way, he wouldn’t need those, either.

The tour was La Follette’s second public attempt at sparing himself the indignity of being banished to the Capitol basement. The first attempt was a public letter to the governor, which said in part, “You and I may have had our disagreements over some issues in the past, but this conversation is about maintaining important services and access to records for the citizens and businesses of Wisconsin now and into the future, not about you and me.”

The good news about La Follette’s concerns is that they are also reflected in the budget. Among the economies proposed, the state Department of Administration would take over the maintenance of the records concerning municipal boundary lines. This continues the long term trend towards taking away La Follette’s responsibilities and finding other agencies to take care of them. Soon the burdens of La Follette’s office will be lessened, and so will his budget.

The governor has also proposed eliminating two of the four positions in La Follette’s office. In his letter, La Follette complained, “With a 50% staff reduction (to two FTE) as proposed in the 2015/2017 Budget, it will be impossible to maintain quality service to the public, especially in the event of employee illness, vacation or other leave.”

Right, because in a pinch there are simply not enough government employees in Madison that could be trained in a job-sharing system to fill in temporarily in a record keeping “emergency.” The obvious solution, of course, is to take away the rest of the secretary’s responsibilities, too, and give them to another agency. Then La Follette won’t have to worry about being short-handed.

La Follette wonders if he is forced to move, what will happen to the “thousands of current and historical documents including: Statutes, laws of Wisconsin, Blue Books, gubernatorial filings requiring application of the Great Seal (executive orders, proclamations, pardons), boundary agreement filings, charter ordinance filings, municipal filings, oaths of office, political action committee filings, special council contracts and state bond filings. By statute, these records must be secure and available for public inspection.”

Or, as the Milwaukee Journal Sentinel described it, “…banks of ancient filing cabinets and a storeroom down the hall that houses cardboard boxes of records.”

Surely the state could follow what many private companies and even the federal government have done: contract out storage of the records until they’re needed. It doesn’t have to be a private company like Iron Mountain with a vast vault underground. It could be as simple as shipping the records to the state historical society or the University of Wisconsin.

As for the Great Seal, I would caution La Follette against mentioning it. People might remember he once lost it.

Since the view from La Follette’s office won’t be distracting, he could spend his time thinking about life after he leaves office. Somewhere there’s a beach calling La Follette’s name with a little umbrella drink waiting for him. The next time he asks Adamczyk what happened to his red stapler, he could also ask, “So explain to me again how we get the legislature to get rid of our jobs?”