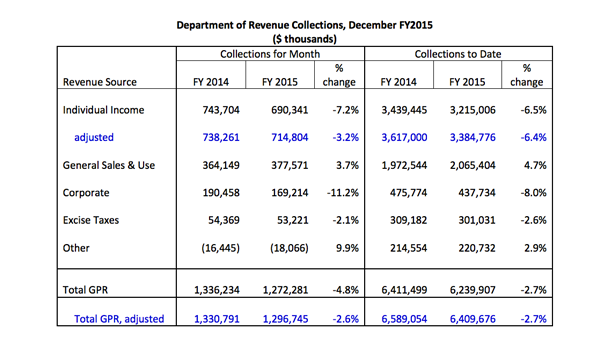 The Department of Revenue (DOR) released the new revenue numbers on Tuesday. While income tax revenue was down, sales tax revenue was up 3.7 percent – a sign that Wisconsinites are spending more money.

Overall, state tax collections for the month of December were $34 million less than the previous year’s totals, and total revenue for the first half of FY15 is $179 million short of revenue during the first half of FY14. That amount represents a 2.7 percent decrease from what was collected through the same period the year prior.

Individual income tax revenue for December was down $23 million year over year, and down $232 million over the first six months of FY15.

The non-partisan Legislative Fiscal Bureau is expected to release new 2015-17 budget projections later this week based on the actual revenue collections over the first six months of FY15.

The most recent memo from the Fiscal Bureau predicts an $824 million deficit for the upcoming budget.

The new projections will likely help shape Gov. Scott Walker’s budget proposal, which he is expected to introduce on February 3rd.