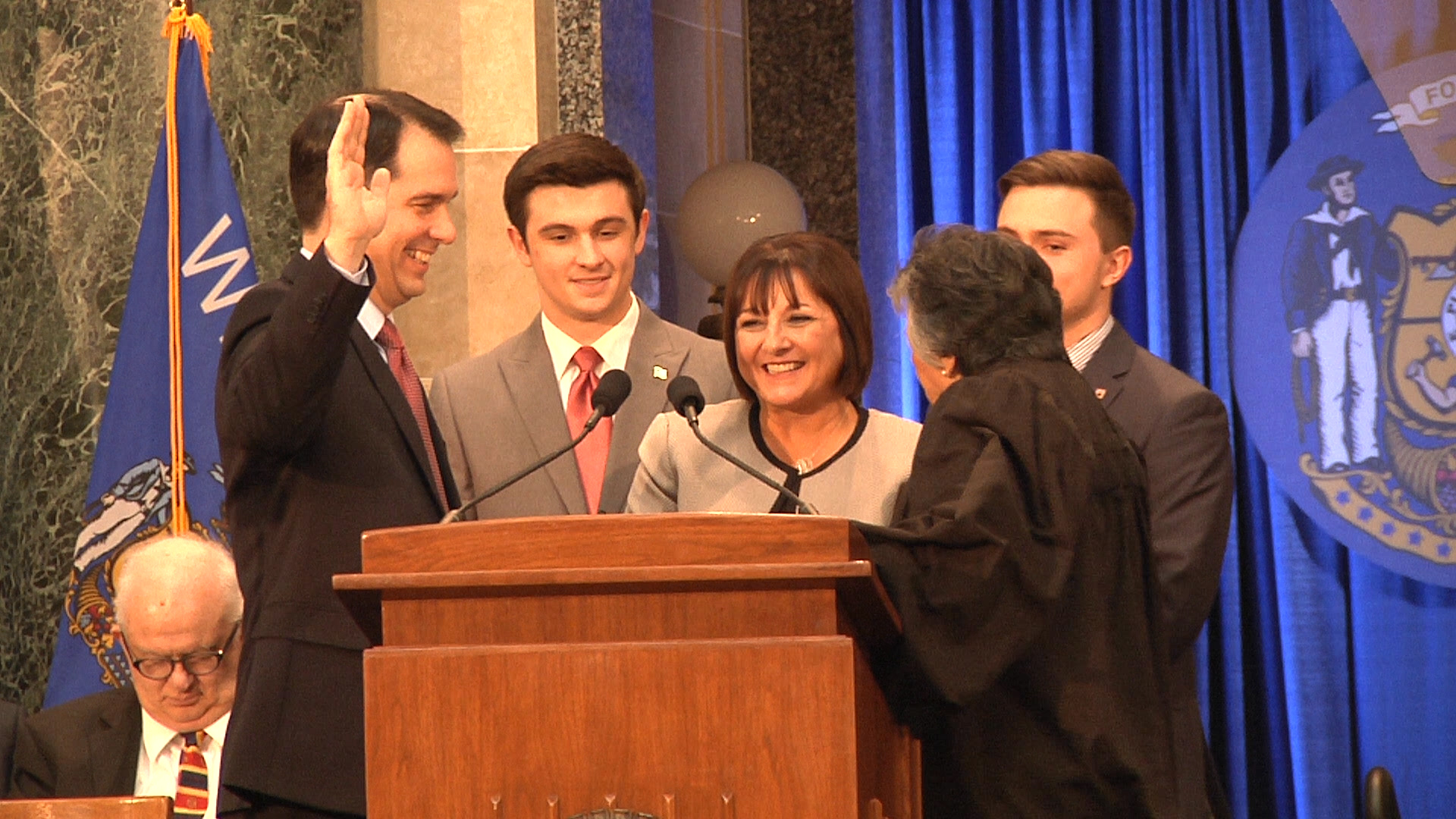 [Madison, Wisc…] Gov. Scott Walker was sworn in for his second term as the 45th Governor of Wisconsin on Monday. In his inaugural address, Walker drew comparisons between Washington, D.C. and Wisconsin, hinted at expanding the state’s school choice program, and boasted about reforming state government.

Walker’s inaugural address was comparable to the speech he gave in November after being elected for the third time in four years. He focused on his successes as governor and vowed to “move Wisconsin forward.”

The governor – who is considering a run for president – made it clear that Wisconsin is headed in the right direction, while the opposite is the case in the nation’s capital.

“In contrast to the politicians along the Potomac, we get things done here in the Badger state,” Walker said in his speech. “There is a clear contrast between Washington and Wisconsin.”

“We’ve been good stewards of the taxpayers’ money and lowered their tax burden as well,” Walker continued. “We’ve shown why the founders of this great nation looked to the states–and not the federal government–as the source of hope for this exceptional country. We will not let them down.”

Much of the distinction with Washington was centered on the proper role of government. Walker argued that people, not government, create jobs and that the power should be in the hands of the people, not big government special interests – a tip-of-the-hat to his signature legislation known as Act 10, which reformed collective bargaining for public employees in Wisconsin.

Walker then looked to the future in his speech, outlining some of his major priorities in the upcoming legislative session.

“We will ensure every child – regardless of background or birthright – has access to a quality education,” Walker said. “For many, like my sons and me, it is in a traditional public school. For others, it may be in a charter, a private, a virtual or even a home school environment. Regardless, we will empower families to make the choice that is right for their sons and daughters.”

Reforms to how state government functions were also central to Walker’s priorities.

“We will reduce the size and scope of government to match the will of the people. State agencies will be merged to make them more effective, more efficient, and more accountable to the public,” the governor announced. “We will continue to weed out waste, fraud, and abuse. Budgets will be set based on the taxpayers’ ability to pay and not on the government’s ability to spend.”

Walker ended his speech around the theme of living the American Dream – once again, similar to his November speech.

“Working together, I believe we can create a state that is even better than the Wisconsin we grew up in,” he said. “Help us realize that dream of freedom and prosperity for all.”

Newly and reelected members of the State Assembly and Senate were also sworn in on Monday after the inaugural event for Walker, Lt. Gov. Rebecca Kleefisch, Attorney General Brad Shimel and State Treasurer Matt Adamczyck.

“In this session, we won’t look to create new government programs,” Vos said in a statement. “Instead, we must think of ways to reduce the size of government by consolidating agencies and eliminating programs to make government more efficient and effective.

“We must not take the easy route and just propose additional ways to spend more taxpayer dollars,” he continued. “Instead, we must work to find ways to curb government spending and reduce bureaucracy.”

Senate Majority Leader Scott Fitzgerald (R-Juneau) told reporters after members were sworn in that a school accountability bill would be his chamber’s first priority, saying he hopes to get something done in the month of January. He also told reporters that he is supportive of a Right-to-Work bill, but stopped short of saying that a bill would be introduce right away.

During his speech to the new Senate, he said he hopes to build on the successes of last session.

“As we embark on the process of crafting the next biennial budget, we will ensure that the best interests of Wisconsin’s taxpayers remain a priority,” Fitzgerald said. “Meanwhile, we will strive to reform our education system, defend public safety, invest in infrastructure, and prove that we are responsible stewards of Wisconsin’s finances.”

Both the Assembly and Senate are scheduled to be on the floor on Wednesday, January 7th, but it is not anticipated that any major bills will be introduced.