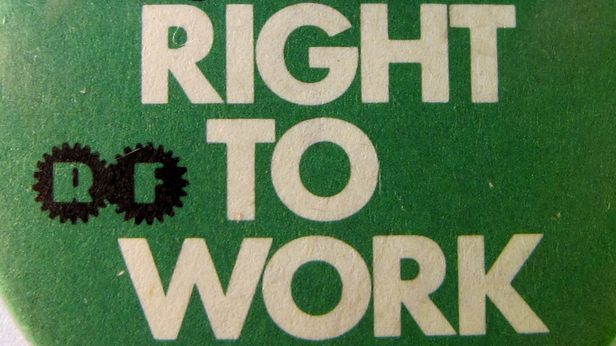 One of the more prominent complaints at the time Act 10 was passed was about the exclusion of local police and firefighter unions from its effects. Milwaukee Mayor Tom Barrett made it a regular criticism of Governor Scott Walker during the recall campaign, and his criticisms were echoed elsewhere.

Choice is a key word when discussing right-to-work. In an interview on the television program UpFront, Democratic State Rep Andy Jorgensen used the word choice when trying to argue against right-to-work legislation. According to the transcript, “It does not get to the question of whether or not an individual should have that right, that choice. It takes away the freedom to belong to a strong union. You have the freedom of whether or not you want to work at a union shop. You should have the choice to belong to a collective-bargaining unit so you could fight for things like wages, safety, and workplace conditions.”

It’s an interesting definition of the word “choice” from Jorgensen. You can either choose not to work, or you can choose to be part of a union.
But public sector workers now have a third choice and many are taking advantage. WEAC, the state’s largest teachers union, has lost a third of its membership, according to Forbes. The American Federation of Teachers has lost half of its membership. The Washington Examiner reports American Federation of State, County and Municipal Employees (AFSCME) Leadership Council 40 has lost 18,000 members in the past four years while Leadership Council 48 has lost 5,600 members.

As Sean Higgins in the Examiner wrote, “The membership declines suggest that thousands of workers have simply walked away from their unions, either because they did not want to be members in the first place or because the reforms sharply limited what the unions could do for them even if they stayed.”

The freedom to choose whether to be in a union is a benefit available to public sector workers. It makes sense to extend that same freedom to the private sector.

As for Jorgensen’s concern that employees will not be able to choose to join a strong union, nothing about right-to-work prevents workers from joining a union. However, it actually becomes a choice instead of compulsory, just as it is in the public sector. And unlike the public sector, private sector unions will still maintain the right to collectively bargain for its members on issues beyond wages.

The challenge to Democrats, if they’re interested in being consistent, is to follow Milwaukee Mayor Tom Barrett’s lead from the passage of Act 10 and demand right-to-work be applied to all unions. Not only would it be in the interest of fairness that Democrats claimed to support during the Act 10 debate, but it would be consistent with Jorgensen’s comment now that workers should have the right to choose a union if they want to.

We spend a great deal of time focused on the positive fiscal impact of Act 10 to the state of Wisconsin ($3 billion and counting), but we don’t emphasize the liberating provisions for both public employers and employees. But Act 10 gave public employees a choice in whether to join a union, and they’re taking advantage. It’s time for the Democrats to get on board and demand the same for the private sector under right-to-work legislation.