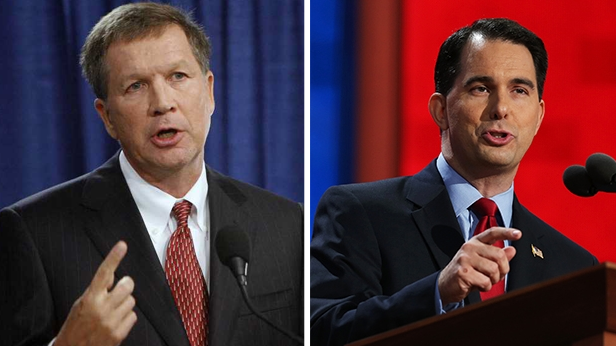 Under the Obamacare Medicaid expansion, states have the option of expanding Medicaid coverage to those earning up to 138% of the federal poverty line. The federal government will cover 100 percent of the increased Medicaid costs for the first three years before gradually reducing to a federal reimbursement rate of 90 percent.

By agreeing to accept the federal funds for the expansion, Kasich is committing his state to participating in a substantial expansion of a federal entitlement program which will have long-term costs for his state and federal taxpayers.The Heritage Foundation estimated in 2012 that an acceptance of increased Medicaid money from the federal government would cost Ohio state taxpayers $407 million the first five years and nearly $1 billion by 2022. That’s if the federal government keeps its promise of the level of reimbursement under Obamacare.

Kasich’s approach also assumes federal funds are “free,” and that Ohio residents are not federal taxpayers, too. Ohio residents will be paying both ways for the Medicaid expansion in their state.

But even assuming that federal money falls from the sky like manna from Heaven, it cannot last. The federal government is already $18 trillion in debt. The MacIver Institute reported a warning from former Congressional Budget Director Doug Holtz-Eakin, “By 2020, as baby boomers continue to age into Medicare at the rate of more than 10,000 a day, Medicare’s cumulative $6.2 trillion in cash flow deficits will constitute 35% of the nation’s total debt accumulation.”

If the federal government looks to rein in entitlement spending, the states will likely see a lower Medicaid reimbursement rate despite the promises of Obamacare. Already the Obama Administration considered a “blended rate” plan that would have cost Ohioans $2.5 billion over the first five years of the expanded Medicaid program, according to the Heritage Foundation.

Ohio will be stuck with making a hard choice. Will the state move people back off the expanded Medicaid program to avoid the costs, or will legislators have to find a way to make up the lost money, probably through higher taxes?

Under the Wisconsin approach, taxpayers will save up to $752 million through fiscal year 2017. The savings will occur even though the state is actually expanding coverage. The Kaiser Foundation has stated that Wisconsin is the only state to reject federal Medicaid expansion funding that has no coverage gap.

Under Obamacare, private insurance rates are already expected to climb, contrary to the promises President Obama gave. As costs are passed by the health care providers to those with private insurance, rates will continue to climb. Increasing the number of people covered by Medicaid to those earning up to 138% of the federal poverty line will only exacerbate the problem in Ohio, actually making private insurance unaffordable to more Ohioans.

No, St. Peter won’t ask about keeping government small, but he might remind Kasich that St. Matthew was despised as a tax collector for the Romans until he chose a different path. Ohioans would probably prefer a little less rendering unto Caesar and a better plan for providing health care coverage for the poor.

While Wisconsin football fans may be mourning the loss by the Badgers to the Buckeyes on Saturday, Wisconsin’s legislators and governor can brag about making the winning call on Medicaid. The score is not even close.