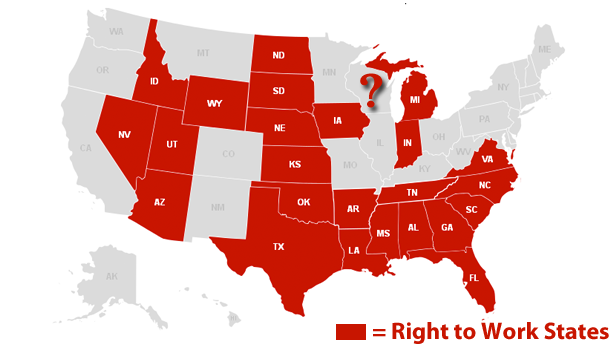 Rep. Kapenga: “[Right to Work] is the single most important thing we can do to help move this economy forward.”

[Madison, Wisc…] Recent comments from legislators and conservative leaders have quickly opened the door for Right to Work legislation in Wisconsin. While the governor has said it is not a priority, a bill may still end up on his desk come the New Year.

The concept of a Right to Work law would be similar to Wisconsin’s Act 10, but would extend to private unions, as well. If signed into law, Right to Work would protect workers at private businesses from being fired if they refuse to join a union – essentially putting an end to compulsory union membership in the state.

Employees would also not be required to pay union dues if they choose to opt out.

Rep. Chris Kapenga (R-Delafield) announced earlier this week that he would lead the charge to pass Right to Work legislation in the Assembly. In an interview with the MacIver Institute, Kapenga said it is an important next step to improve the economy and help businesses create jobs.

“To me it is the single most important thing we can do to help move this economy forward,” Kapenga said.

The possibility of passing Right to Work was given a boost on Thursday morning when Senate Majority Leader Scott Fitzgerald (R-Juneau) told Milwaukee radio host Charlie Sykes that the senate would be willing to take the lead on discussing the legislation. Fitzgerald has been a long-time supporter of Right to Work and said the legislation would come up early in the session.

“While we do not know what a state-specific version of Right to Work will look like in Wisconsin, we owe it to the people of the state to have a true public policy discussion on the issue,” Fitzgerald said in a statement following the morning interview. “That means examining the laws of the 24 other states that have already adopted some version of these protections and working with representatives of the private sector to determine the best fit for Wisconsin.”

Kapenga mirrored Fitzgerald’s sentiment that the legislature would be looking at versions of Right to Work that other states have passed. But, he said the essence of the bill would simply allow “people to choose their union status.”

Gov. Scott Walker has not said whether or not he would actually sign a Right to Work bill, however.

When talking with reporters in Milwaukee on Wednesday, Walker said it would be a distraction, but stopped short of saying he would veto it.

“Right to Work legislation, right now, as well as reopening Act 10 to make any adjustments, would be a distraction from the work we are trying to do that helps employers,” Walker said.

The governor said he would rather focus on policies including tax reform, education reform and entitlement reform.

While Walker is not calling for Right to Work, it seems like the momentum for passing a bill is quickly gathering. Fitzgerald’s comments on Thursday seem to point to the support from his caucus and Kapenga told the MacIver Institute that many of his colleagues are enthusiastic about passing the legislation.

The exact language of Right to Work legislation is yet to be determined, but Fitzgerald said it could include some exemptions for certain organizations like operating engineers and the pipefitters’ union.

Opponents were quick to claim Right to Work legislation is an attack on unions and worker rights.

“Changing Wisconsin to a right-to-work state appears part and parcel of an extreme Republican agenda that looks to satisfy the wealthy and corporate wish lists,” Sen. Tim Carpenter (D-Milwaukee) said in a statement. “It sure looks like their plan is to rip open old wounds with their divide and conquer strategy against workers’ rights just like they did with Act 10.”

Research from the Competitive Enterprise Institute suggests that economic growth is greater in Right to Work states.

The MacIver Institute will provide updates on Right to Work legislation as they come available. Check back often for the most up to date information.