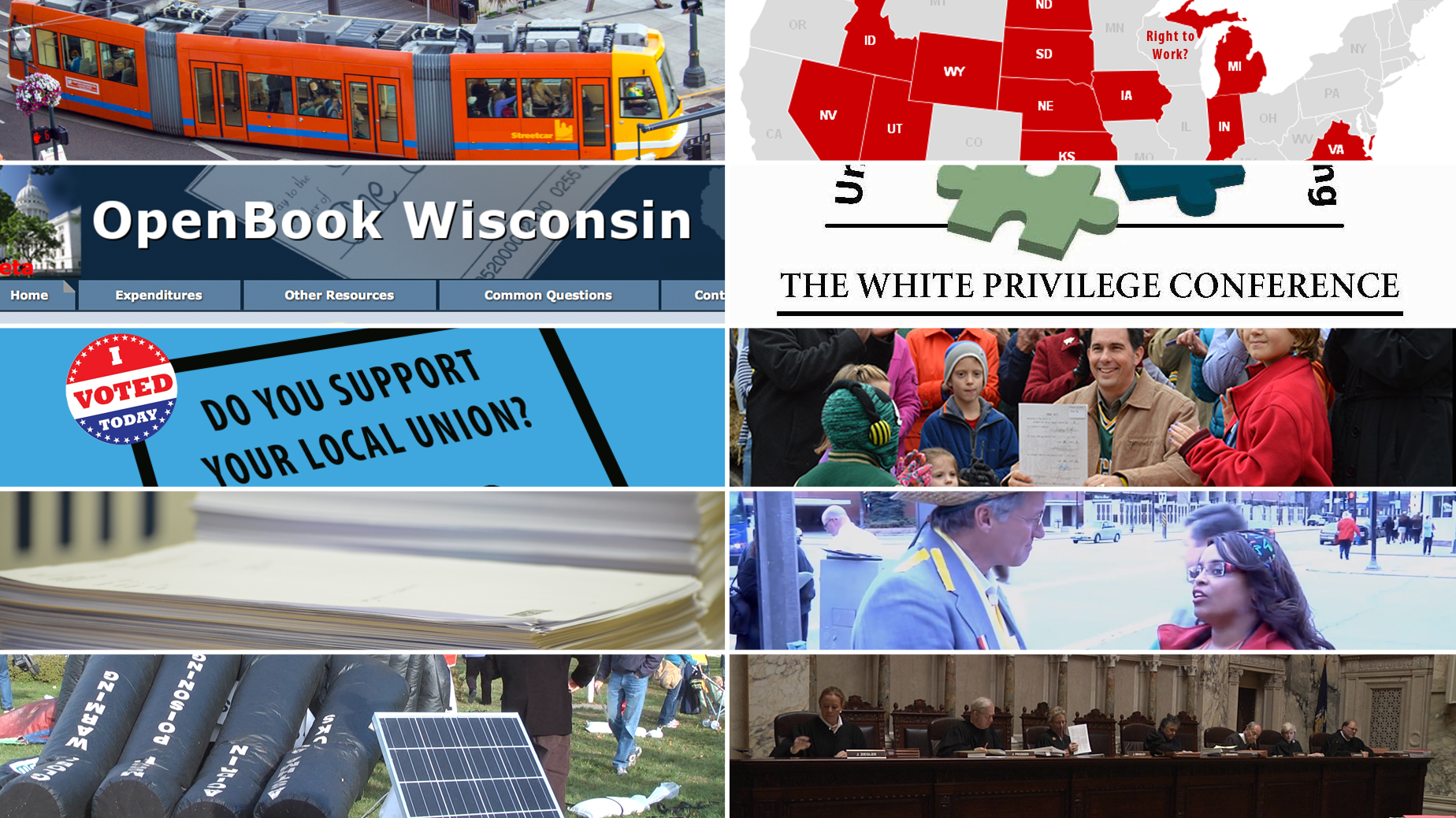 [Madison, Wisc…] Wisconsin is no stranger to big stories, from the passage of Act 10 to countless recall elections. While 2014 was by no means a turbulent year, in many ways it was just as remarkable and likely just as important as the previous few. So, after combing through hundreds of articles, here are MacIver’s top 10 stories of the past year.

When the 2013-15 state budget passed, it had a measure in it that would keep utility ratepayers across the state from having to pay to move utility lines for the construction of a streetcar. This was expected to essentially kill Milwaukee Mayor Tom Barrett’s plan for one downtown. Then the Public Service Commission agreed with MacIver President Brett Healy that ratepayers should not be on the hook to cover the costs. Instead of stopping the project, Barrett pushed on and even doubled the price tag of the streetcar – now up to $124 million.

The final vote to approve the streetcar was delayed at a recent Common Council meeting, but is largely expected to pass in January. With Milwaukee property tax payers getting stuck with the bill, they may be the last hope to stop this boondoggle.

9. Will Wisconsin Become the 25th Right to Work State?

During the last couple weeks of 2014, Right to Work legislation has become a hot topic, and the momentum to pass a bill early in the new year is quickly building. Leaders from both the Senate and Assembly have come out in support of Right to Work, while Gov. Walker has simply called it a “distraction.” It is expected that a bill will be introduced in the Senate shortly after the new legislative session begins and if they pass it, Assembly members – including the co-chair of the Joint Committee on Finance Rep. John Nygren (R-Marinette) – have said there is enough support to send it to Walker’s desk.

Could the top story of 2015 be that Wisconsin became a Right to Work State?

In 2013, more than 80 public school district unions decertified after the Wisconsin Employment Relations Commission held the required recertification elections. In 2014, 100 fewer unions than the prior year filed for a vote, and of those that did, 25 failed to recertify. Act 10 requires yearly recertification elections, and it looks like more government workers are deciding they don’t want to be represented by a union. In fact, nearly 15,000 public employees did not vote in favor of their union.

After a three-year legal battle with the MacIver Institute, Sen. Jon Erpenbach (D-Middleton) was ordered to turn over every email he received from a public employee in the wake of Act 10 without any redactions. The emails found that not only were government workers lobbying Erpenbach during normal business hours, but they were also making hyped-up claims that never came to fruition. In fact, one employee claimed she would lose her house because of Act 10. That employee has a total compensation of more than $100,000 a year and still lives in the same home today – which is valued at $550,000.

Another win for government transparency.

In a news story that garnered national media attention – including a spot on FOX News’ afternoon show The Five – protesters in Madison were failed by the exact things they want more of. While protesting a rate structure change proposed by Madison Gas and Electric (MG&E), demonstrators called for more wind and solar energy while bashing the use of coal power plants. To further make their point, they had a blow-up coal power plant prop that was inflated with a fan powered by batteries charged by wind and solar power. When the solar power couldn’t keep up, the power plant quickly deflated, along with the protesters point.

One of the biggest stories of 2014 was the complete waste of taxpayer funds on the 15th annual National White Privilege Conference, which took place in Madison in late March. Taxpayers shelled out more than $85,000 to send DPI staff, professors, teachers and other public employees to the radical conference. MacIver reported on multiple sessions, one in which the Tea Party was called racist and another where a speaker called teaching a “political act.” That same speaker also said, “If you don’t want to work for equity, get the f*** out of education,” calling parts of the schooling system “oppressive” to minority students. MacIver broke multiple stories about the conference, many of which garnered national media attention.

Next year’s conference is March 11-14 in Louisville, Kentucky. We wonder how many Wisconsin public employees will attend this time and at what cost to taxpayers?

With a new legislative session starting in January, we hope to see continued tax reform so this can be a top story for years to come.

2. Brett Hulsey Confronted by a Black Republican after Calling the GOP Racist

MacIver broke yet another story that garnered national media attention in 2014, and this time it was catching then-candidate for governor Brett Hulsey on camera talking with a black Republican about the GOP’s so-called racist agenda. Pam Stevens stood up to Hulsey for wanting to give out KKK hoods at the Republican state convention in May and the resulting video went viral. Hulsey went on to lose his bid to be the Democratic nominee for governor in the August primary with less than 17 percent of the vote.

1. Act 10 Upheld by the Supreme Court in Its Entirety

And this year’s biggest story in none other than the Wisconsin Supreme Court’s decision to uphold Gov. Walker’s signature legislation. Act 10’s collective bargaining reforms have saved Wisconsin $3 billion to date, and the savings continue to grow every single day. The Supreme Court’s decision to uphold the law on a 5-2 vote will have positive impacts on the state’s finances for years to come. Aside from saving taxpayers money and being the catalyst to $2 billion in tax cuts, Act 10 took away Big Labor’s power by challenging the status quo. Now taxpayers are back in charge, and the highest court in the state has ensured that will be the case for decades.

What do you think the top news stories of 2014 were? Agree or disagree. Share with us below.