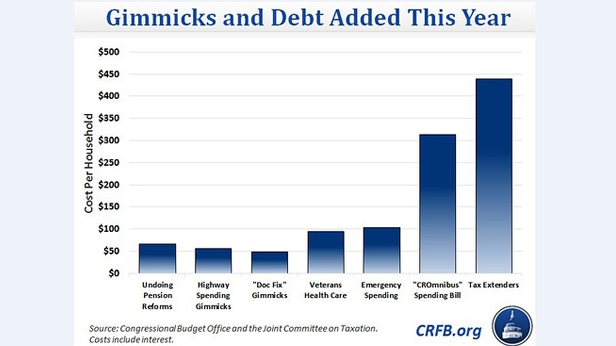 This column was first published by the Wall Street Journal.

Simply put, 2014 has not been a good year for the debt. While the short-term deficit improved-after growing 800% following the financial crisis-policymakers still added more than $100 billion to the debt. Because billions are hard to conceptualize, it is worth looking at this in terms of debt per household.

First, Congress undid the one real reform in last year’s Murray-Ryan budget deal: replacing reforms to military pensions with a budget gimmick, losing $7 billion in real savings in the process. After interest, that’s $65 per U.S. household. Lawmakers also paid for highway funding partially with gimmicks, adding an additional $60 to every household’s share of the debt. Then there was the unpaid-for increase in veterans’ health care ($100), the “doc fix” Congress paid for with a gimmick ($50), and emergency spending to fight Islamic State and Ebola that lawmakers didn’t even try to pay for ($105).

When Congress finally passed funding for the fiscal year (2 1/2 months after it started), lawmakers slipped in a further $315 of debt that each household would have to bear, using phony offsets, unjustified cap exemptions, and hidden spending. And this week, lawmakers reinstated a number of expired tax breaks that will cost every household $440.

Actually, policymakers had tried to borrow much more. Democrats wanted to borrow to pay for unemployment benefits that would have cost $180 per household and a permanent doc fix that would have run $1,700. House Republicans had pushed for permanent tax breaks costing $7,850 per household, with some Senate Democrats, including leadership, apparently willing to go along with some $4,200 of it. During the summer, there was a bipartisan Veterans Affairs reform bill that would have cost $4,750 per household. In addition, House Republicans, with some Democratic support, passed legislation rolling back more than $1,000 worth of pay-fors in the Affordable Care Act, including repealing the tax on medical devices and changes to the employer mandate.

Find out more by visiting the Committee for a Responsible Federal Budget.