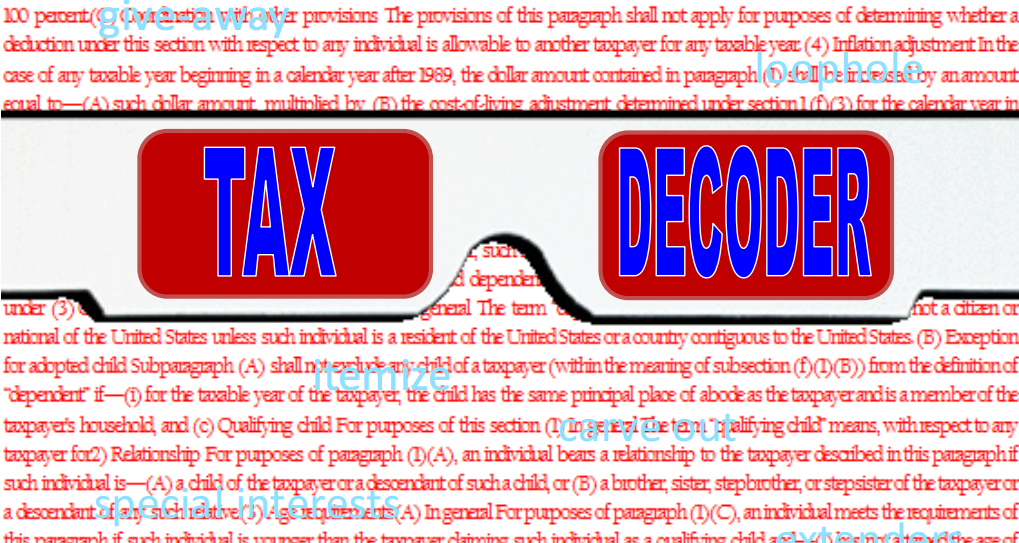 [Washington, D.C.] Retiring U.S. Sen. Tom Coburn (R-OK), author of the annual “Wastebook” publication, takes another foray into government waste and abuse in a new report entitled “Tax Decoder.” The 312-page report highlights nearly a trillion dollars in questionable and crony-like federal tax breaks that are given out every year through our broken tax code.

The federal tax code has grown from just 27 pages in 1913 to 9,000 pages today and includes billions in write-offs for everything from professional sports leagues and race horses to magazines and Hollywood superstars.

“All of these tax giveaways add up to nearly $1 trillion in lost revenue every year,” explains Coburn in his report. “For each of these that benefit only one company or industry, other businesses must bear a disproportionately higher effective rate. Instead of artificially lowering the rates for select industries, companies or individuals, Congress should lower rates for all taxpayers in a fair and equitable manner.”

Coburn decries the burdensome complexity of the federal tax system that hits taxpayers with $100 billion in tax preparation costs every year. In fact, the IRS will be unable to collect $500 billion in owed taxes this year despite having 40,000 staffers and a $10 billion budget. That amount would balance the budget this year with room to spare.

On tax deductions, loopholes, and exemptions, the senator explains that many of these laws were created with good intentions but have since been abused. One example is the ability to use three different deductions for homeownership that can be piled on top of dozens of federal programs aimed at homeownership aid. Another is the New Markets Tax Credit (NMTC) that was initiated to bring economic revitalization to depressed areas, but according to Coburn, has “instead resulted in nearly $1 billion being steered to wealthy investors and Wall Street banks.”

Wisconsin receives a few mentions in the report. Apparently, the NMTC was used to build an IHOP in Milwaukee as well as two Mexican restaurants in the state. Surely IHOP needed the money, and what better way to tap a new market than to subsidize burritos?

In 2011, a Wisconsin man was caught after defrauding the Earned Income Tax Credit (EITC) for $3.2 million collected over multiple years. The report recommends EITC reforms to stop the program’s 25 percent abuse rate, which gives away billions in fraudulent payments every year.

Another Wisconsin mention involves the tax-exempt status of Indian tribe business operations organized under tribal law. The Menominee Indian Tribe in Wisconsin owns a lumber and forest products company that is exempt from taxation.

The senator also bemoans the fact that various tax breaks allow nearly half of the nation’s households to pay no federal individual income tax, including nearly a thousand millionaires. Despite that fact, in 2011, the bottom 50 percent of all tax filers contributed 2.9 percent of all income taxes while the top 10 percent pitched in 68.9 percent, a disparity that the Senator does not oppose in principle but still sees as a problematic inequity.

A “tax extenders” bill has already passed the U.S. House and will reauthorize existing tax breaks if approved by the Senate and President this week. Coburn hopes for comprehensive tax reform that eliminates or reforms many of these so-called “temporary provisions” in exchange for lower and broader tax rates for everyone.

The following is a list of some of the most questionable tax provisions mentioned in “Tax Decoder” and their associated costs for Fiscal Years 2014-2018.

Created in 2004, this tax break was created to encourage rehabilitation of short-line railroads. Unfortunately, these sorts of targeted subsidies do little to affect the transportation market.

Motorsport speedway tracks are depreciable assets for their owners, and therefore must have a depreciation write-off time table for tax purposes. Politicians from states with motor speedways have legislatively ensured that these facilities are on an accelerated seven-year depreciation schedule rather than a longer fifteen year schedule. This grants track owners more tax breaks at a quicker pace.

A product of the alternative fuel blitz, this tax break is aimed at electric cars and other electric vehicles. Once again, academic studies have proven the ineffectiveness of such credits for consumers in the market. 2012 saw 1,300 millionaires claim $9 million in qualified plug-in electric vehicle credits, according to Coburn’s report.

Under this tax deduction, TV and film producers can deduct 100 percent of their expenses so long as 75 percent of compensation is within the country. The tax break was supposed to save jobs, but the movie and TV industry are certainly not pinching pennies after posting growing revenue years even during the recession.

Large magazine publishers are able to depreciate their circulation costs in the same year of publishing, rather than over multiple years like most other businesses. This accelerated write-off provision allows a few of the nation’s top magazines to circulate millions in tax breaks to themselves!

Created to stimulate economic activity in low-income communities. The problem is that most of the nation is qualified to be a low-income area for this tax credit, making accountability difficult.